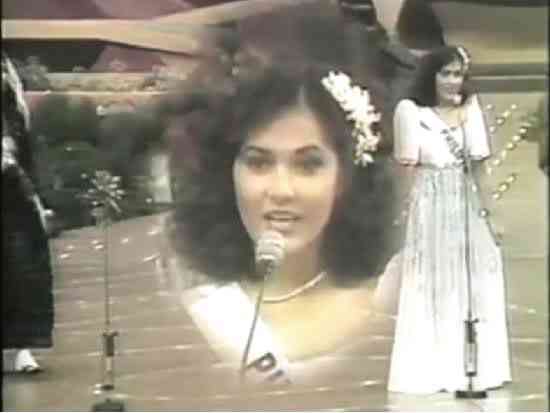 Unlike some of us who feigned illness as children to avoid a test, beauty pageant enthusiast Antonio “Pamboy” Reyes Pastor would pretend to be sick so he could watch the Miss Universe telecast.

A consistent honor student during his elementary and high school years at Colegio San Agustin (CSA), he kept his high marks despite his absences during pageant season.

“A few days before the actual telecast, I would casually announce that I was feeling ill. Eventually, my classmates noticed that I was always absent on pageant day,” he recalled.

A missed test on his last year in grade school might have cost him the chance to graduate class valedictorian. “There was no makeup test, so I ended up as salutatorian,” he said.

In high school, however, he redeemed himself and graduated class valedictorian.

Like many other Filipinos, he was introduced to the Miss Universe pageant in 1974, when the competition was held in Manila. The previous year, Margie Moran had brought home the crown.

Pamboy and his older brother Miguel—eight and 10 years old at the time, respectively—devoured any and all news about the pageant. They filled homemade scrapbooks with news about the numerous activities and appearances leading up to the competition.

“At the time, our sister Isidra was putting together her own scrapbooks with pictures of dresses and fashion models, so we thought about making our own scrapbook,” Pastor said. This entailed going to the bookstore and stocking up on three-hole fillers, and binding the scrapbooks themselves.

His interest in all things pageant-related remained unchanged even after Spain’s Amparo Muñoz was crowned Miss Universe 1974. He followed the other international pageants such as Miss Asia Quest and Miss Young International.

“After the pageant, I remember we went to Shantung Restaurant in Echague, Quiapo. Outside, there were magazine stalls selling colored posters of the candidates in their swimsuits taken at Philippine Village Hotel. I convinced my mother to buy one. They were being sold for P1.50 each,” Pastor recounted.

As soon as they got home, he and Miguel cut up the poster into individual squares. These were then pasted into their scrapbook.

The brothers continued pageant-watching through the years. Pastor would keep track of the telecasts by clipping the schedules published in the papers. They served as reminders for him to set the family’s Betamax machine to record the program so he and Miguel could watch it again at their leisure.

These repeated viewings and a sustained interest in the topic have made Pastor one of the country’s most knowledgeable when it comes to pageant-related trivia.

He shares a few juicy ones:

Binibining Pilipinas-Universe 1980 Chat Silayan missed her flight to the competition twice. The first time she didn’t show up at the airport. She missed it a second time because she was expecting to be driven by a chauffeur.

Before Gloria Diaz left for the Miss Universe competition in 1969, she and the other local winners that year went to Cebu. They visited a Taoist temple where the priestess told her that she would become famous. “Nagpahula siya.” This boosted her confidence and she eventually bagged the Philippines’ first Miss Universe crown.

When pageant host Bob Barker asked Binibining Pilipinas-Universe 1967 Pilar Pilapil, “Are you sure you’re 18?” she thrust out her chest and replied, “Yes, I am.” She was actually underage.

Myrna Panlilio was supposed to compete in Filipina Maid of Cotton pageant, but was pulled out at the last minute. She went on to become the country’s first Binibining Pilipinas in 1964.

Upon her return home,  after a failed bid in the Miss Universe pageant in Perth, Australia, Binibining Pilipinas-Universe 1979 Dang Cecilio cried and said she was a victim of racial discrimination, because all the finalists were taller than her.

Binibining Pilipinas-Universe Desiree Verdadero joined twice, in 1982 and 1984. She had to wait a year because designer Renée Salud had her teeth whitened and straightened with the aid of braces.

Binibining Pilipinas-Universe 1978 Jennifer Cortez felt sorry for herself during the competition because she hadn’t packed enough outfits and had to resort to washing those she had brought with her.

Binibining Pilipinas-Universe 1985 Joyce Ann Burton was “technically disqualified” because she was a US passport holder. She participated in the Miss Universe pageant but in a noncompeting capacity.

Binibining Pilipinas 1985 runner-up Glenah Slaton is now a spiritual adviser in California. She claims she can see a person’s past and future by simply holding that person’s hand. She has assisted the local police force in profiling criminals.

Binibining Pilipinas-Universe 1963 Lalaine Bennett was the first Filipina to place in the Miss Universe pageant. She was that year’s third runner-up.

Miss Universe 1957 Gladys Zender of Peru was not yet 18 when she won, but was still crowned because her birthday was in three months.