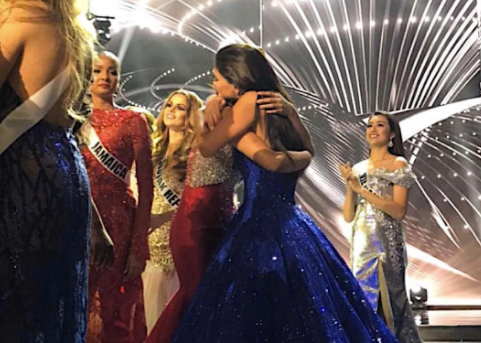 No crown, no problem.

While she did not score a back-to-back victory for the Philippines in the Miss Universe pageant, Maxine Medina received something special from the outgoing queen.

A photo of Miss Universe 2015 Pia Alonzo Wurtzbach, dressed in her blue Final Walk gown, hugging Medina after the pageant at the Mall of Asia Arena is making the rounds on social media.

Medina finished in the Top 6 of the competition. Iris Mittenaere of France was crowned Miss Universe 2016.

“The best part about this photo is it shows what kind of Queen Pia is. She took the initiative to actually look for Maxine in the sea of girls just to hug her and (probably) tell her everything will be okay. We love you Maxine, we love you Pia,” wrote model-host Richard Juan on Instagram.

Medina made it until the question and answer portion round, where she was asked about the most significant event she had seen in the world in the last 10 years.

“The last 10 years of being here in the world is that I saw all the people being in one event like this in Miss Universe, and it’s something big to us that we are one, as one nation, we are all together,” Medina answered.

Wurtzbach on Monday announced that she had inked a contract with New York-based talent management company International Management Group (IMG). Weeks before the coronation, Wurtzbach also revealed that she may be extending her stint at the Miss Universe Organization as ambassador. CBB/rga