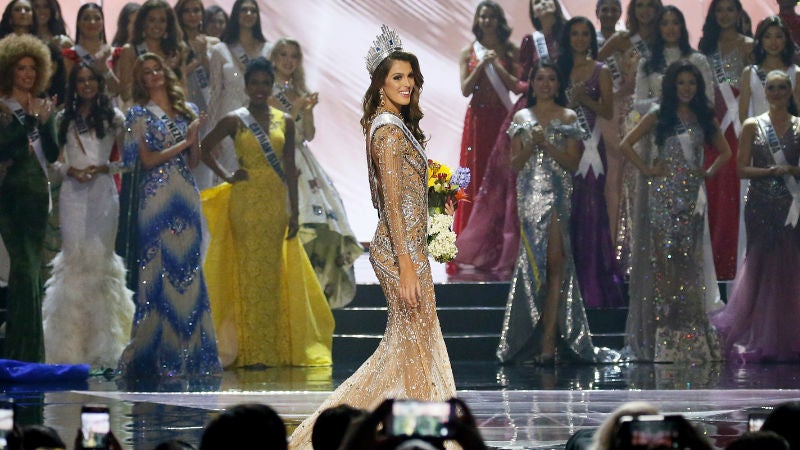 “This is the best show I’ve ever done.”

This was how Paula Shugart, Miss Universe Organization (MUO) president, on Monday summed up the 65th Miss Universe pageant, which the Philippines hosted after more than two decades.

At a press conference with the newly crowned Miss Universe Iris Mittenaere of France, Shugart thanked the Department of Tourism (DOT) and businessman-politician Luis “Chavit” Singson “for making [the 2016 franchise] happen.”

“We first talked about this in July and here we are seven months after with a worldwide telecast in over 190 countries and millions of viewers all watching the Philippines,” Shugart said. “It is very exciting and I want to thank the Filipino people and the Philippine media for their support.”

Tourism Secretary Wanda Corazon Teo said hearing those words from the MUO was heartwarming given all the sacrifices and tough work the Philippines had to do to stage the pageant.

The Philippines first hosted the beauty contest in 1974 and the second in 1994.

Teo said she believed that the country’s hosting of the 2016 franchise was “perfect,” as the MUO head kept on telling her throughout the pageant, which commenced on Jan. 15, that the organization “was very happy with what was happening.”

Shugart had also been getting a lot of text messages from abroad asking where the Philippines was, according to Teo. “That alone was a sign that many people are starting to get interested about the Philippines,” said the DOT chief.

During the main competition at SM Mall of Asia Arena in Pasay City, Miss Universe 2015 Pia Alonzo Wurtzbach said the hosting of the beauty contest was an effort to put the Philippines back on the world stage.

Singson, chair of LCS Group of Companies, said the more than $14 million he coughed up for the 2016 franchise was not a financial loss but an investment he would later recover when more tourists start visiting the country.

An increase in tourist arrivals would also mean more jobs and business opportunities, he added.

To show the MUO’s appreciation for Singson, Shugart awarded him with a sash that said “Mr. Universe.”

Aside from Singson, Philippine television network Solar, Japanese billionaire Kazuo Okada, SM Group and Philippine Airlines were the other partners of Miss Universe.

Filipinos showcased warm hospitality until the end of the pageant even if their representative missed the final cut.

People at SM Mall of Asia Arena were ecstatic throughout the three-hour ceremonies, and screamed their lungs out whenever Miss Philippines Maxine Medina appeared onstage and especially during her inclusion in the Top 13, then the Top 9 and then finally in the Top 6.

But when the 26-year-old Medina missed the final cut to three, the audience briefly lost its jubilance. The hometown crowd eventually showed magnanimity and continued to cheer for the final three delegates.

Haiti’s Raquel Pelissier appeared to have gained a huge support group after the final question round. She received a round of thunderous applause from the predominantly Filipino crowd during the “final look” segment of the competition.

But American host Steve Harvey, this time with the aid of spectacles handed over by Wurtzbach, announced France’s Mittenaere as the new winner.

Still, the Filipino crowd welcomed Mittenaere’s proclamation and punctuated it with a warm round of applause and euphoric cheers.

Designer Joji Lloren said it showed that “Filipinos are a good sport.”

For American George de Carlo, who came to the show to accompany his partner, Medina’s interpreter, the Filipinos “did the proper thing. They just moved ahead and moved towards who they saw was the better candidate.”

The Filipino crowd even saved some love for 1993 Miss Universe Dayanara Torres and 1994 Miss Universe Sushmita Sen, who were part of the judging panel, and welcomed them with a hearty applause.

Sen, who received her crown from Torres in the pageant staged in the Philippines, took the time to reciprocate the affection she received and announced: “Mahal kita, Philippines!”

Even the new queen found the Filipino people’s hospitality remarkable.

“Thank you to all the Filipinos. You are exceptional,” Mittenaere said in her first press conference at the media center near the arena minutes after her coronation.

“You are so lovely with us. All the girls in the pageant love you,” she said of the Filipino people.