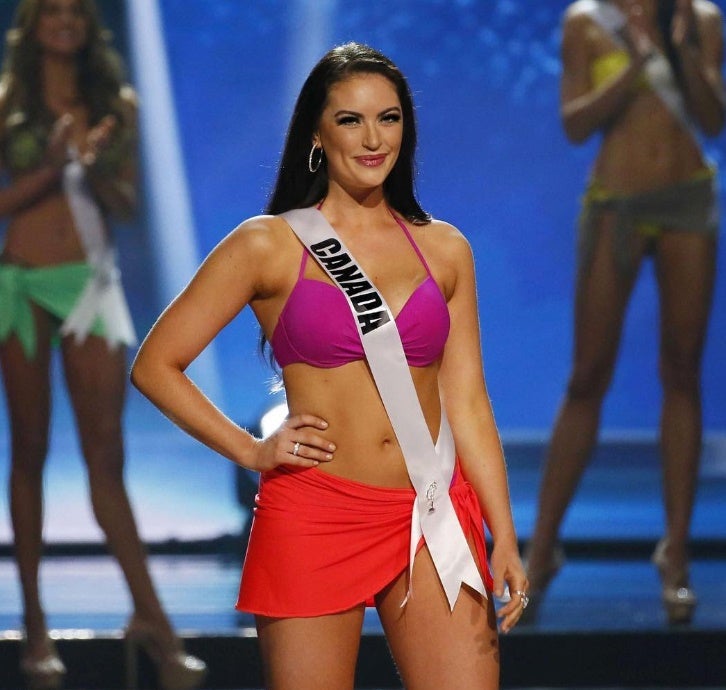 Faced with body shaming, Siera Bearchell of Canada said she has proven her critics wrong after her top nine finish at the 65th Miss Universe competition on Monday.

In an interview with reporters on the red carpet of the afterparty in Okada Manila, Bearchell was all praise for the new Miss Universe Iris Mittenaere from France who was crowned on Monday at the SM Mall of Asia Arena.

“She’s beautiful, she’s sweet. We’re all happy, because she’s friendly from the inside out,” Bearchell said.

She also took the time to address her bashers who subjected her to body shaming, supposedly because she was not as thin as the other Miss Universe candidates.

And because she finished at the top nine, Bearchell said she has proven her critics wrong.

“I am thankful for everyone. I’m so happy that everyone kind of jumped on board with my message. And I think it made a big difference. I’m so excited,” Bearchell said.

Bearchell has attracted the attention of the country’s own Miss Universe 1969 Gloria Diaz, who named her as one of her favorites.

“I love her face. Am I right? She’s beautiful,” Diaz said in an interview with ANC’s “Headstart.”

But the witty and frank former queen added with a caveat — “If Canada could lose 8 pounds.”

Bearchell has taken to Instagram to promote her message that one only needed to redefine beauty to qualify as Miss Universe.

“This is the generation of body diversity. This is the time we start working together to redefine the global vision of beauty,” Bearchell wrote in an Instagram post after the coronation.

Bearchell even addressed a question from the press about how she feels like being “larger” than the other candidates.

“‘How does it feel to be so much.. larger than the other delegates?’ I was just asked this question in a press junket by a member of the media. I was left almost speechless,” Bearchell said in another Instagram post.

She said her answer to that question was: she felt great about body diversity.

Bearchell has been promoting the message of body diversity, true to the Miss Universe trademark slogan of being “confidently beautiful.”

“I have a vision to redefine beauty. I have a vision in which women around the world will recognize that true beauty, validation and self-worth start from within,” Bearchell wrote in another Instagram post.

She called out her detractors calling her fat and lazy that she is not insecure about redefining the standards of beauty anchored on body diversity, now one of the core values of the Miss Universe.

“I am secure and that’s what makes me beautiful. When you call me lazy, fat, and mediocre, what are you saying to the women of the world? Miss Universe is an organization built on the foundation of inclusion and diversity. It is no longer the ‘beauty pageant’ it used to be,” Bearchell said.

“The mission of Miss Universe is to provide the tools for women to reach their personal best and use those skills to serve others. That’s exactly what I am doing and I will not be brought down by shallow negativity. In fact, the negativity only fuels my fire to keep working on a platform that so evidently needs to be progressed. This journey has just begun,” she added.