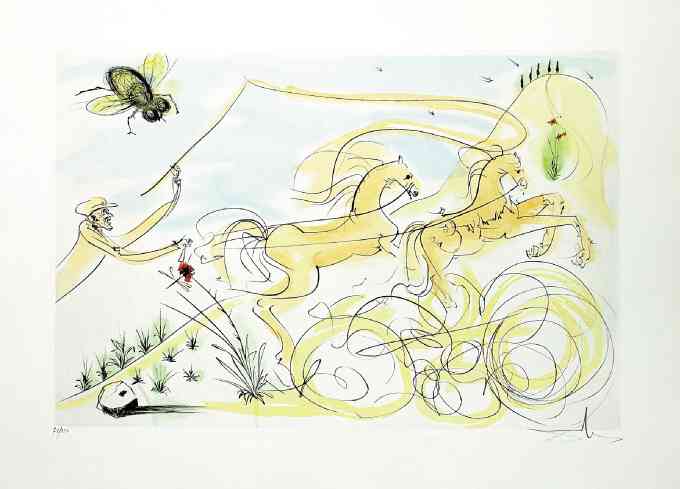 “The Coach and the Fly”

People used to think I was weird because I had a reproduction of Salvador Dali’s “The Sacrament of the Last Supper” in my dining room, instead of a rug based on Leonardo da Vinci’s more familiar painting of the scene.

“Dali—isn’t he the melted-watch guy?” dinner guests used to ask.

I had a Dali fixation ever since glimpsing pictures of “The Persistence of Memory” and “Soft Construction with Boiled Beans” in the “Encyclopedia Britannica” when I was still in grade school.

The haunting, hallucinatory images sort of scarred me for life.

Later, I even attempted to read “Hidden Faces,” Dali’s only novel, but it was heavy going.

His paintings were much more accessible. Thanks to his bravura technique, often compared favorably with the Renaissance masters, and his genius for self-promotion, Dali became arguably the most famous exponent of Surrealism, that school of avant-garde art that sought to overturn the rational world in favor of the illogical world of dreams.

Dali was, as we used to say in those times, a trip.

Until recently, the best chance to see his work in the flesh, as it were, was to make a pilgrimage to one of the museums dedicated entirely to his work, one in his birthplace in Spain, and another in Florida in the United States.

But thanks to a convergence of peculiar circumstances, local art lovers now have a chance to see some of the master’s lesser-known graphic works.

The Hiraya Gallery is mounting an exhibit of 24 original Salvador Dali prints at the Mezzanine of the Makati Shangri-La, from Jan. 31 to Feb. 14.

The works in the exhibit consist of engravings from the series “Le Bestiaire de la Fontaine Dalinese” and Dante’s “Divine Comedy.”

In “Hello, Dali!”, his cheekily titled notes to the exhibit, art critic Cid Reyes writes: “In the former, Dali’s vaunted flair for fantasy and imaginative meanderings are at play in these prints, and with many of them featuring a menagerie of animals, thus delightful and charming. Deer, giraffe, camel, horse, elephant, wolf, birds and vulture are characters displaying human characteristics, not at all cartoonish, but drawn, freely sketched as in a mad, exhilarating fury but always with a tremendous sense of energy and confidence, capturing the essence of the underlying story and narrative which the viewer must perforce quickly glean: in warfare or in courtship, at leisure or in confrontation with Death. Always they are set against an empty landscape, or a minimalist but evocative setting, such as a desert, a garden, a forest, a ravine.

“The show also includes some prints from Dali’s ‘Divine Comedy’ series, based on Dante Alighieri’s canticles: ‘Inferno,’ ‘Purgatorio’ and ‘Paradiso.’ The poetic narrative tells of a pilgrim’s journey, from the damnation of hell to the salvation of heaven. The pilgrim, representing Dante, is guided by the lovely Beatrice, who was Dante’s great love. Dali’s prints add poetic and theatrical dimensions to this most significant work of the Middle Ages.”

Also on exhibit will be a rare folio edition of John Milton’s “Paradise Lost,” translated into French by Paul Valery and illustrated with 10 signed prints by Salvador Dali.

The Dalis are part of the estate of a Filipino connoisseur based in the US, and are now available to collectors through Hiraya Gallery.