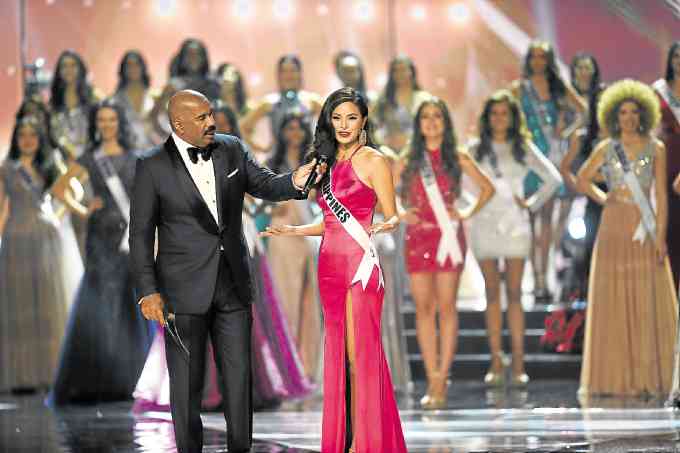 No matterwhat you say, she did the country well.—AFP

Dove,” my sister should have said. “It represents peace.”

The question was, “What is your favorite animal?” We’d rehearsed that answer a million times before pageant day, but she answered: “Pusa po, kasi po may nanganak sa harap ng bahay namin.”

True, but not deep enough. That was 14 years ago, she was 7, but her competitors had impressive answers. She didn’t make the cut.

“In the last 10 years of being here in the world, I saw all the people bringing in one event like this in Miss Universe. It’s something big to us that we are one. As one nation, we are all together,” she said.

Aside from the obvious mistranslation, many other things came into play.

I, for one, think the pressure—particularly the bashing—got to her head. Charlene Gonzalez didn’t encounter that much bullying in her time as host candidate, although her Top 6 answer also didn’t get her into the Top 3 in 1994.

The question given to Maxine was the hardest, too, as it required her to find a point in time that was both sublime and relatable. She had to treat the question as those questions of essence—like “What is the essence of being a woman?” or “of a chair?” Obviously, she didn’t do it the Sushmita Sen way. But, the others had simply to opine.

We should understand the process, all in 30 seconds. Stop bashing her or, as many who’ve come to her support say, join the Binibining Pilipinas, make the cut, answer the question, win the Miss Universe Philippines title, make it all the way to the Top 6 at Miss Universe (preferably with the Philippines as venue, for the added pressure) and answer the question better. Thank you very much.

To handle the issue more constructively, we at Inquirer Super decided to look beyond the candidate and into the question, which is extremely relevant. Sans the time pressure, the collective gaze and the distress of the pageant, here’s how people answered:

“The biggest change I’ve seen in the world in the last 10 years is social media and how it (they?) transformed communication. We now have a platform to speak out in a manner so powerful, easy and free, thus empowering us both as creators and consumers of information. This empowerment, though, is both an honor and a responsibility. LOL. We now have the responsibility to self-regulate, so that in the process of speaking out we do not harm anybody, even ourselves. Because it is only when we achieve genuine self-discipline that we become truly self-empowered.” -Jap Marbella, “host ng grassroots pageants, where the real beauty queen dreams begin”

“Before, only birds were tweeting. Now, people do.” -Allyssa Ruazol, college student

“Kilay goals. Then people would leave it up to parlors and makeup artists to thread their eyebrows. Now people don’t leave their homes if they can’t make sure their eyebrows are ready—with a little trimming; shaping with the pencil and brush.” -Jessica Jean Marco, guilty

“The faster spread of information through technology. Although it has its downside, like fake news and propaganda, it helps us become aware of the issues and crises going on in the world, and it enables us to act and be part of a global nation. It also lets us connect to the people we love, people we look up to, and people who inspire us.” -Lui Milanes, Maxine Medina’s classmate who says, “We were in a school play together”

“The most significant change that I have seen in the past 10 years is that we were able to find ways to fight micronutrient deficiency and energy gap… Serious ba? Sige. The biggest, most significant change that I have seen within the past 10 years is, I can see that both women and the LGBT community have been given more opportunities, may it be with their talents, skills, in marriage. I think that’s one thing that we have to celebrate.” -Martin Jee Capuno, “catalyst of change, ambassador of goodwill”

“Climate change has been tremendously felt all over the world in the past 10 years. Extreme weather events have become common. In fact, one of the strongest typhoons ever recorded occurred here in the Philippines. [Supertyphoon] ‘Yolanda’ claimed thousands of lives in the Visayas. We must support and take part in all the green initiatives to help the world heal as it progresses.” -Mary Karen Melicano, beauty-queen wannabe

“I think the biggest change I’ve seen in 10 years is the breakthrough on the internet, especially with social networking sites. In 10 years, it has instantly connected people from all over the world, made us aware, made us participate and made us internationally relevant. But it also made families divided, friendships broken; and it became an avenue to abuse life, thoughts and rights. Maraming salamat, Pilipinas!” -JP Bayang, pageant fan

“The most significant change that happened in the past 10 years is the change in the youth’s perspective when it comes to new trends in technology, innovations; and the choices made. I think that, when it comes to technology, they are so advanced, they have high aspirations. I think that’s the most significant change that has happened around us. That’s all, thank you.” -Dolly Jane Fregon, youth advocate

“Perspective. Everything that has happened in the past decade, the advancement, the setbacks, the successes and failures, it all became possible because of peoples’ perspectives. The attitude is to be more ‘social’ by using electronics, and staying away from gadgets has become more complex. Diversity is now more accepted than ever. We are slowly becoming more morphed, less binary; more technologically advanced and yet environmentally aware.” -Nirel Ortigas, odd child of the universe

“The most significant change I’ve seen in the last 10 years is the boom of social media. Apart from making communication easier, it also provides artists newer platforms where they can share their works and reach their audience. I think it’s a great way to bring art closer to people.” – Mina Deocareza, writer

“The advent of social media; and how we are able to use it to express our thoughts and show influence through various platforms. We became more democratic. Social media breaks borders, unites people, serves as a catalyst for change. Let’s use it responsibly.” – Piew Aquino ,self-described essential millennial

“The most significant change I’ve seen is how social media has become the most important thing to almost all people. It has the power to do anything now- from spreading info, to influence thinking, to dictate the future of a culture, to win elections, to shape history, to alter human behavior, to raise awareness, to create movements and to arouse people participation in worthy causes.” – Lara Cerys Valenzuela, beauty queen

“The biggest change in our society is how people now connect to each other, wherein gadgets and social media take part in our communication. We are now more accessible and can contact each other through the tips of our fingers. But we kinda lost our human and personal touch, and let gadgets or social media overrule our ethics to connect to each other… Thus, such change must be equipped with love and respect for fellowmen, for humanity to maintain goodness and camaraderie… Change is inevitable, thus we should embrace it and utilize it as humans with a heart.” – Airwind Bautista, pageant expert