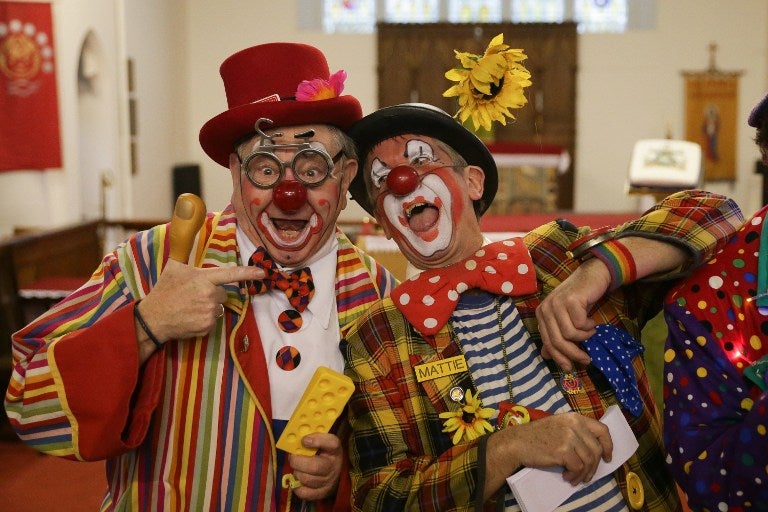 Clowns perform ahead of the annual Grimaldi Memorial Service at the All Saints church in east London on February 5, 2017. The service takes place to celebrate the father of modern clowning, Joseph Grimaldi, who died in 1837. / AFP PHOTO / Daniel LEAL-OLIVAS

LONDON, United Kingdom — Dressed in bright colors and wearing shiny red noses, dozens of clowns gathered in London on Sunday to celebrate the life of the art form’s founding father.

Bold make-up, bowler hats and oversized bow ties were on show at All Saints church in east London, as entertainers gathered for an annual memorial service for Joseph Grimaldi who died in 1837.

Men, women and children — including a baby in full clown attire — squeezed into church pews to sing hymns and read a prayer dedicated to the profession.

The service was first held in 1946 at the now-demolished St James’ church, Pentonville, in London’s northern borough of Islington where Grimaldi is buried.

He is credited with creating modern clowning, with famous songs such as “Hot Codlins” which describes an old lady who sold roast apples and “drank too much gin” according to Islington council.

He has also won praise from London’s Victoria and Albert Museum, which boasts a theatre and performance section among its collections.

“Grimaldi’s physical comedy was extraordinary, as was his ability to invent visual tricks and buffoonery… no one achieved the same legendary status as Grimaldi,” the museum wrote online. CBB