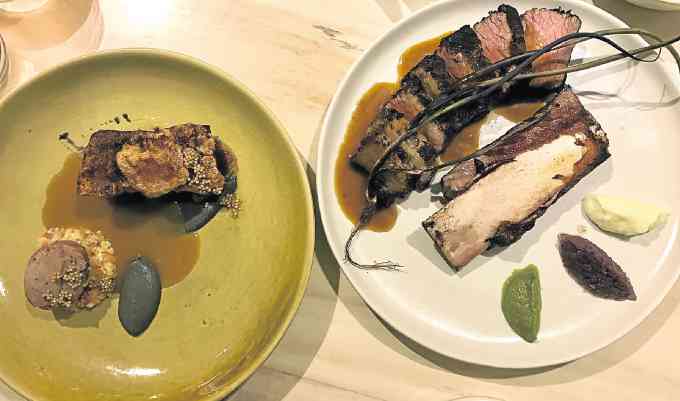 What sort of a name is that?” a friend thundered when I invited them to try Made Nice Supper Club. “What kind of food do they serve? Are we going to get full, or do I have to eat before going to dinner?”

In the reviews and write-ups on Made Nice, one fact consistently surfaces: how young the chef-owners are. And I’m aware that I’ve just exacerbated the problem by starting off this review with that.

That the restaurant is owned and run by what, in an earlier age, would have been called the beardless ones, saplings, untested in battle, brings out a certain condescension in customers and reviewers alike.

While this can work to their advantage, in that we’re more forgiving than we might otherwise be in our judgement, it also does them a fundamental disservice in that we don’t take the endeavor as seriously as we would if we felt it were a burnished, final product.

If his friends had told JRR Tolkien that “The Hobbit” was very cute, a nice little prologue to something more substantial, he would probably have been too exasperated to go deeper in the reaches of language and imagination to begin writing “Lord of the Rings.”

Made Nice feels like a debut in more ways than one, but every new restaurant is, after all. And I would like to give the restaurant the respect it deserves by writing about it on its own terms.

The restaurant is obviously not trying to appeal to passers-by.  It has  discreet signage which (just about) spells out the letters MN. It’s not difficult to find, though—through a large window, a clean, well-lighted space full of bustling waitstaff and happy diners can be seen.

Another giveaway is the number of expensive cars jostling for parking as close to the entrance as possible.

The chefs might be young, but the customers, at least in the 6:30 p.m. seating for which we reserved, came from the regular restaurant—spending—clientele.

We had the grilled octopus and the foie gras for starters.

The menu is fairly straightforward, listing each dish’s ingredients, with the main ingredient highlighted. There was none of the rococo poetry that usually adorns fine-dining restaurant menu—“an exquisite arm of air-flown octopus, char-grilled to perfection and served with a velvety sauce of pureed tuna and a smattering of vegetables”—though, if you must know, that was exactly what it turned out to be.

Foie gras is always good as long as the quality is assured, the produce is fresh, but can be even better with the right sauce and accompaniments. Here they added enough adornment to make it uniquely their own and worth dining out for, rather than frying it up at home. It was glazed with a sweet but not cloying coating of orange and served atop a brioche.

The main courses truly show off the chefs’ skills.

I had heard so much about the tagliolini, hand-made and tossed with duck egg yolks and parmesan, as well as the “divine” halibut, but my encounter with the transcendent would have to wait until our next visit.

We went for somewhat predictable choices: my wife had the pork and I the beef,  the only item on the menu over P1,000. (To give you an idea of how reasonable the prices for mains were, the taglioni was P395 and the lamb, which I was also considering, was P655.)

Paying this much for a main course makes you feel like you’re dining in a  hotel, but no hotel gives you this much beef, and even as I type this I’m aware of the lipid matter coursing through my system.

The pork belly was also very good, juicy and cooked to perfection, with all the flavor still in the meat, not drained away into the sauce.

The crackling was decently executed—it didn’t fail to crackle—though Cantonese roasters and lechon masters have figured out how to get the skin crisp but soft in a way that mortal men cannot manage. But I have no complaints: This was outstanding food.

There’s a short but interesting selection of wines, by the bottle or glass, which those who do drink tell me are quite good. We had a bottle of Katipunan Kölsch which went down very well with everything.

The desserts, however, are where they stumble. It’s partly  because by this time one is really, really full and the previous courses have set the bar so high.

It’s also partly because in the industry, generally, dessert making is somewhat in  crisis.

The pastry kitchen is the least innovative sector; it’s also the part of the meal where the restaurant makes the least money, and they would rather that the customer not tarry, to give way to the next seating.

But excuses aside, it’s mainly because the dessert chef is not quite there yet. There are only two desserts on the menu,  both of which are too heavy and too stodgy to follow a big meal.

One is basically a hacked-up brownie with a dollop of ice cream: not unpleasant by any means, and would be quite at home in a comfort-food place like Kettle, but something of a letdown after the inventiveness and subtlety of the starter and mains.

The other dessert is a mysterious bowl of mush, like a breakfast cereal that has steeped in milk too long. This is a small caveat for someone like me who is supposed to be off sugar anyway, but it’s definitely something the creative team should be working on.

Taken in itself, Made Nice already dazzles. As a promise of things to come, it is tremendously exciting and proves that my pessimism about the future of the restaurant scene is unfounded.