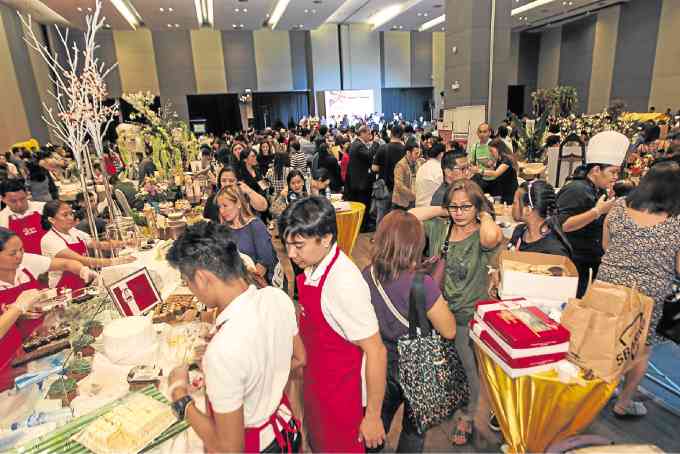 Dessert lovers gather at SMX Convention at SMAura at the launch of Best Desserts 3. —LEOM. SABANGANII

Foodies marched out of the SM Aura Premier convention center on Monday night with boxes of desserts, as if Willy Wonka switched to cakes and pastries and gave them all away for free.

But instead of the eccentric chocolatier, it was Inquirer Lifestyle hosting the launch of “Best Desserts 3,” the third of its yearly anthology of the country’s most sumptuous confections.

The sugar-laden creations were served in several long tables sprawled inside SM Aura’s SMX center—a feast that celebrated both the book and the desserts recognized this year.

It was also the first time tickets were sold to the public, with the proceeds going to Gota de Leche, a 120-year-old Sampaloc-based nonprofit that holds nationwide feeding programs for indigent children and breastfeeding mothers.

“This is our yummiest event in the Inquirer; we are so happy it has gotten bigger and bigger each year,” noted Inquirer President and CEO Sandy Prieto-Romualdez.

Regulars from the two previous Best Dessert events held in the same venue noted that the foot traffic this year was much heavier. Dessert makers and their guests already numbered more than 600. This did not include walk-in guests who bought tickets.

Dessert fans are apparently fond of mash-ups this year. Confections that combined two (or sometimes three) treats were a hit. Salted egg has carved its spot as a rising star among dessert ingredients.

The Black Gold Egg Custard Bun by Conrad Hotel was a mystical blend    of salty and sweet in the form of chocolate cake and salted egg.

Queso de bola  also held court with chef Sunshine Pengson of Gourmandise by Sunshine taking the traditional Christmas dairy and giving it a sugary spin via Queso de Bola Sans Rival, which had guests coming back for up to fourth servings.

The youngest member of this year’s crop is  a bemedaled skater. After a knee injury forced her to temporarily halt her regular skating schedule, 16-year-old Sabine Katigbak of Patisserie Sabine busied herself with baking.

“I would bake with my friends but I also baked at home. My younger brother Xavi loves Milo so I experimented in the kitchen and tried to come up with a Milo-based cookie,” she told Inquirer Lifestyle.

It took a while before she got the right consistency, one that her nine-year-old brother approved of.

The result, served at the Best Desserts launch, was a thin, chewy cookie that was unmistakably Milo—in cookie form.

Dusit Hotel’s Khanom Tako reminded one of maja blanca from long-ago childhood meriendas, while Wicked by Cravings’s malted cookie shards looked like they were torn out of the cookie house in Hansel and Gretel.

Pepita’s truffle lechon—while technically not a dessert—drew the longest line and was wiped out in less than an hour.

Guests said Monday’s event could already be considered a major national food event. This year also marked the inclusion of a Visayas-based participant—Marco Polo Plaza Cebu, which flew in several staff to Manila to present its hugely popular Malicious cookies.

In her remarks, Romualdez pointed out the tedious process that Lifestyle’s Baga-Reyes goes through to come out with a new list of Best Desserts.

“They always go through before-and-after [tests] in the Inquirer before she does the Best Desserts. We try to weigh ourselves and we try to keep our weight, but today’s [food] is guilt-free. There are no calories in anything that you’re eating because you’re also giving,” she told guests.

“Vangie has worked tirelessly on this book. The vision that Vangie has had with the rest of the team has been to really support dessert makers whether they be at home, just starting off. We are very proud of the fact that we actually spotted them [first],” Romualdez added.