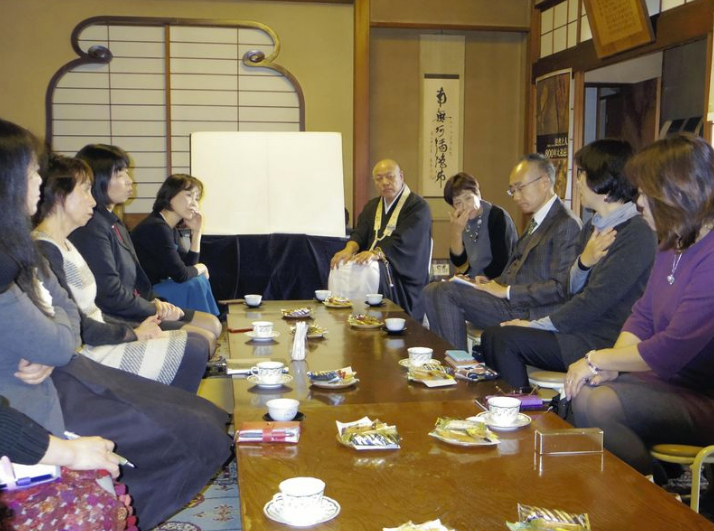 So-called ‘death cafes’—meetings in which people discuss death while sipping tea in a relaxed setting—have been gaining attention recently. What are these events like?

A little more than 10 men and women gathered in a room at Josenji Temple in Bunkyo Ward, Tokyo. Once settled, they began to speak freely about death.

“My husband’s cancer diagnosis made me realize for the first time that everyone will die someday. I want to spend the time I have left with my husband pleasantly,” one participant said.

Another said: “My mother-in-law never suffered a single illness, but she withered away like a flower. I hoped she would die peacefully.”

A warm atmosphere free from gloom prevailed at the meeting. A 57-year-old self-employed woman from Saitama Prefecture explained: “I could never have this kind of conversation at work or in my neighborhood. We can speak up casually because we’re strangers to each other.”

The death cafe was organized by Chikako Kodaira, 55, of Mother Leaf, a group that holds workshops mainly on shukatsu — preparations for the end of life.

Learning about shukatsu made her realize that people lacked a place where they could discuss death. In September last year, Kodaira began to organize death cafes once a month at such locations as Buddhist temples.

In response to her announcement about the cafe on a blog, people across a wide age range — from their 30s to 80s — and from every part of the Tokyo metropolitan area began to gather for the events.

A variety of reasons drive people to visit the cafes, including having experienced a loved one’s illness or death. Others are struggling with vague worries or questions about death.

“It’s my hope that they hear all sorts of thoughts on death, and discover their own views on life and death,” Kodaira said.

The first death cafe is believed to have been organized about 10 years ago by a Swiss sociologist in the wake of his wife’s death. They began to spread across Europe starting around 2011, and events are now organized in about 40 countries.

The cafes aim to encourage people to fully enjoy the limited time they have in life through discussing and being conscious of death, instead of considering it a taboo. Such events are spreading in Japan as well.

In the Kansai region, a group called Wakazo—mainly young monks from Kyoto—organizes a death cafe that attracts many young adults in their 20s and 30s. They exchange views on topics such as “If you were to die in 10 seconds, what would your last message be, and to whom would you deliver it?”

According to group leader Koyu Tsuruno, 29, some people leave cafe events feeling refreshed and saying things like, “The event gave me an opportunity to think about what to do from here on out.”

Young people have fewer chances to confront death as related customs, including visiting the family grave or attending memorial services, have begun to fade due to the growing nuclearization of families.

Against this backdrop, Tsuruno said, “Many people apparently have undefined anxieties about death.”

A death cafe held about once every two months in Sendai is also aimed at preventing isolation. With music and poetry recitations performed in the interval between discussions, the cafe provides an atmosphere anyone can enjoy.

The cafe is hosted by 48-year-old translator Masatoshi Shoji, who had struggled over the death of his wife.

“Some people shut their heart in the wake of a loved one’s death, isolating themselves from the people around them. I hope that [the cafe] will help people avoid isolation by providing them the chance to speak casually about death,” Shoji said.

Regarding the expansion of death cafes, Katsuhiko Fujimori, chief researcher at Mizuho Information & Research Institute and an expert on social security issues, pointed out, “It probably occurred because we’ve entered an era in which people are conscious about quality of life during the last stage of their lives.”

Advancements in medicine have enabled people to live longer with disease. Whether to continue life-prolonging treatments has also become an important choice for many.

How to approach death is a theme in everyone’s life. Even so, vaguely pondering death by oneself seldom results in a solution.

Fujimori said: “You may feel your mind has cleared after having a series of conversations. It may be a good idea to take memos at a death cafe to help you realize your intentions regarding end-of-life treatment and nursing care.”

Your Super guide to themed cafés in Japan

Death is not the end