Lawyer and friends reinvent barbershop beyond a shave and a haircut | Lifestyle.INQ ❮ ❯ 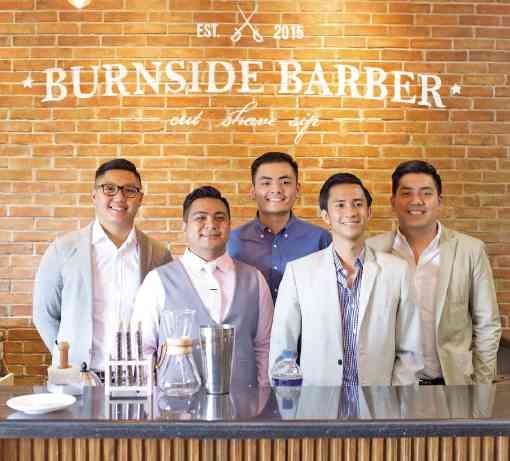 Lawyer and friends reinvent barbershop beyond a shave and a haircut

There was a time in the 1990s when groups of friends would pool their savings and put up a bar or restaurant to have a place of their own where they could relax.

That setup continues to this day with varying degrees of success. But now, there are some who prefer grooming to good eats.

“When I was studying at the Ateneo Law School, I used to go to Felipe & Sons in Makati. Unlike other barbershops where you’re in and out in 30 minutes, there you could take your time, have a cut, shave and facial without feeling rushed.”

When the lawyer moved back to Quezon City, it became too much of a hassle to drive all the way to Makati just for a haircut, especially since Kapunan makes it a point to have his hair trimmed twice a month.

Turns out several friends shared the sentiment. Nico Lumauig, Kenneth Ong, Gil Pe Aguirre and Denzil Li also like to look their best—clean and well-groomed—at all times. At the recent blessing of their barbershop, all five, including Kapunan, were clean-shaven and dressed in linen suits and shirtsleeves.

Their shared vision for Burnside Barber is to develop a place where men could linger after booking a cut or shave. Customers are handed iPads where they can choose from dozens of men’s hairstyles.

“We figured that there were still men who visited their barbershop once every three weeks just to get the same 15-minute cut they’ve had for the past 15 years,” Lumauig said. “We wanted to pave the way for reinvention. We wanted to make each visit a full-blown experience.”

At Burnside, the roomy barber chairs are made of German leather and have the same patina as the tufted leather couch near the window. While awaiting their turn, customers can have coffee or liquor.

“Our mission is to allow every man to be the best version of himself,” Lumauig said.