Dayanara Torres and Vicki Belo: What 2017 holds for them | Lifestyle.INQ ❮ ❯ 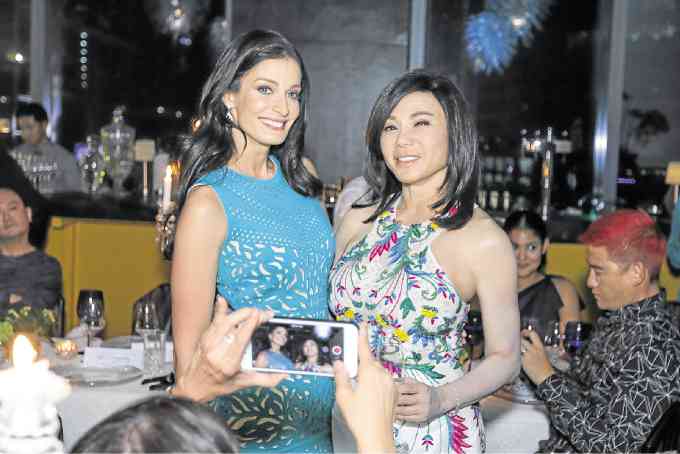 Dayanara Torres and Vicki Belo: What 2017 holds for them

The moment Dayanara Torres stepped into the sleek dining room of Manila House, one knew the visiting beauty queen felt so at home with the dinner guests, and they with her.

The Miss Universe 1993 was not only speaking a smattering of Filipino—a language she last spoke 10 years ago, when she left local show biz and the country—she was also giving everyone a hug, like one was a long lost friend.

If there was a homecoming beauty queen, Torres—whom friends called “Yari” at dinner—was it.

Since she flew in right before the Miss Universe pageant last Jan. 30, in all her interviews, she has been waxing nostalgic about the Philippines. She missed the country, she said, whose people she first captivated in 1994 when, as Miss Universe 1993, she came here to crown her successor, and didn’t leave for some time because she went on to conquer Philippine show biz—and the heart of one of its two most famous actors then, Aga Muhlach. (The other most famous actor, our collective memory says, was Richard Gomez, now a devoted husband and father, as we saw for ourselves on several occasions.)

Obviously, the Philippines also missed Dayanara Torres who went on to become a global celebrity, known to many as wife, then ex-wife, of singer Marc Anthony.

Thursday last week, with the country still nursing a Miss Universe hangover, Dayanara was honored at Manila House by another beauty queen—so to speak, since she herself carved a precious niche in the beauty industry—Dr. Vicki Belo.

The two had met only a few days before that night, yet they hit it off instantly, and Belo, who has an unbeatable talent for branding and celebrity choice, decided to ask Dayanara to be her brand endorser.

“I love how simple, fresh and down-to-earth she is,” Belo described Dayanara to us as she and Dayanara took their seats at the dinner table.

“I knew right away that I wanted her with us,” she added.

Before dinner, that afternoon, Dayanara was at the Belo Clinic to have her Thermage, a beauty procedure that smoothens and tightens the skin and addresses its imperfections—which is so popular among women quite young to have facelifts and too busy that they can’t afford to have downtime.

It should be interesting what the year holds for the two women—together and separately.

Dayanara talked about how she missed the Philippines, its people and the food.

She recalled her homecoming at ABS-CBN on this visit. She was so eager to show her makeup artist (provided by Miss Universe) around her old workplace, only to be surprised, upon setting foot at the ELJ Center, to see how swanky and huge the place had become.

She had a joyous, tearful reunion with the ABS-CBN executives and colleagues, from Linggit Tan, Cory Vidanes, Malou Santos, Olivia Lamasan to Charo Santos-Concio (immediate past president and now head of content), president Carlo Katigbak and chairman Gabby Lopez.

Angeli Valenciano of Genesis—Dayanara’s manager then and now—happily showed us photos of their get-together and said that the former beauty queen would resume her career in the Philippines.

Chances are, Dayanara will shuttle between here and Los Angeles, where she lives with her two sons, Cristian Marcus and Ryan Adrian.

There’s a good range of shows she might do with ABS-CBN, apart from movies and teleserye.

Did she see Aga on this visit? No, she said. (Aga and wife Charlene were reportedly abroad then.)

When somebody at the table asked if she and Aga indeed were an item—a Trivial Pursuit matter now stashed away in show-biz history bin—Dayanara replied, a casual smile in her eyes—“We were engaged.”

She’s mom to 16-year-old Cristian and 13-year-old Ryan. Their home is LA. She drives them to and from school and to their baseball matches.

Zumba is her regular workout that, she said, “leaves me happy every time.”

When she said this, we all remembered how viewers loved to see her dance.

She lived in Manila from 1995 to 2000, a phase which she apparently considered special.

When her manager told her late last year that 2016 Miss Universe would be held in Manila, she was simply ecstatic. “There was no way I would miss coming here,” she said.

“Seventeen has always been my special number,” she told us. “I was ‘discovered’ when I was 17. The date I was crowned Miss Universe was the 17th. And this is 2017.”

Her enthusiasm was infectious. And she’s remained warm and candid.

We remember her in 1994, right after she turned over the Miss Universe crown to 1994 Miss Universe Sushmita Sen, when we had a shoot with her for the cover of Metro magazine. Wig Tysmans did the shoot.

Our son, her preteen fan then, waited for her to finish the shoot, so he could have his photo taken with her. She graciously agreed.

At last week’s dinner, we fished out that vintage photo from our bag and showed it to her. She was so surprised, then in a few seconds, the scene of that shoot resurfaced in her mind.

“Yes I remember this, that staircase,” she smiled. “And my hair, still short. This was not my last cover (for Metro). My hair was long then.” (She was right; we would shoot her again, years later, with her hair longer.)

Then we introduced our son, now an adult. She gladly signed the yellowed photo—an autograph that came 22 years after, late but done with a fresh smile.