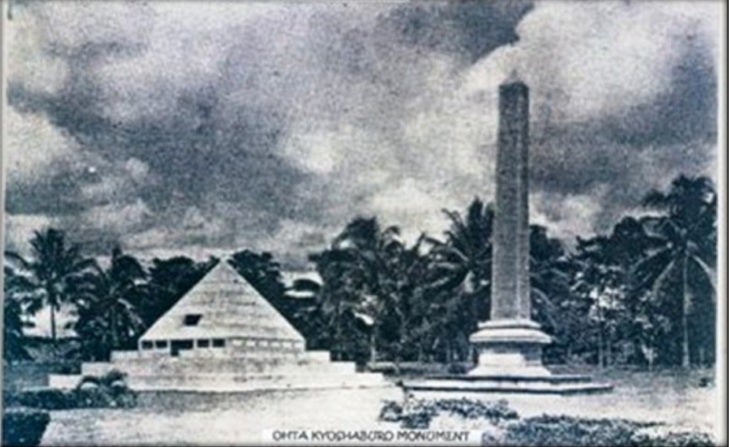 It’s an urban legend—maybe a confidential one, since few Filipino nationals or even Davaoeños know—that during the Commonwealth era, the Japanese community that settled in Davao was among the most progressive in the early days of Davao and left behind a long-lasting legacy that influences us to this day.

In fact, it can be said that they set up the broad strokes for much of the development and economic blueprint of modern Davao, probably the only city in the country where the Japanese imprint is so strong and so beneficial.

Davao, during the days of the Commonwealth era, was found to be a suitable place to cultivate abaca. Land was fertile, weather benevolent, and unlike Bicol, it was safely located away from the typhoon belt.

Ohta Kyosaburo, a Japanese businessman, decided to start an abaca plantation there.

Kennon Road to Baguio was just completed. The Japanese work force was out of work but still in Manila waiting for repatriation. Instead of their returning to Japan where work was uncertain, Ohta convinced them to move to rural Davao and begin abaca cultivation there.

From oral accounts, the area where the Japanese settled to plant abaca was part of tribal land owned by the local tribe, the Bagobos, led by Datu Intal, thus the name “Mintal.”

Bagobos and Japanese coexisted peacefully. Intermarriage resulted in, among other things, increased plantation area. Eventually, the Bagobo population out-migrated and today there are hardly any that remain in the Mintal area.

During the Commonwealth era, a major part of Mintal was planted to abaca. In 1937, at the height of its agricultural and civic activity, more Japanese workers brought in from the Okinawa region of Japan.

It is said that there were as many as 11,000 Japanese living and working there aside from their Filipino employees.

To care for such a large community, facilities were introduced to service the population. The schools, hospital, commercial and infrastructure facilities—to mention a few—set up in Mintal and managed by Japanese or Japan-trained Filipinos. Managed with the usual Japanese efficiency, the facilities became known to be among the best in Mindanao at that time.

The infrastructure left by the Japanese in Mintal was technologically so well built that they formed the basis of the infrastructure network of modern Davao. It can be said that they set the tone for the development of contemporary Davao.

One example is the water catchment system set up to service the hydroelectric power plant of old Mintal has survived to be incorporated into the city power system until its recent decommissioning.

As expected, World War II was the end of the Japanese presence in Mintal. Those who did not flee into the surrounding hills joined the Imperial army. To be able to continue living in Davao, others took on new identities and changed their living patterns.

Physically, very little Japanese heritage remains in Mintal. And what little remains is badly in need of repair and conservation. Some older people in the barrio remember vague Japanese links, but these links have become clouded memories. No traces of Japanese culture, language or even food remain.

Modern Mintal is the site of the local University of the Philippines, who, on its vast campus, is constructing the largest sports stadium in Davao.

Mintal, because of its relatively cool mountain climate, is also known by locals as the ornamental plant growing center for Davao.

What about the Japanese heritage of Mintal?

It is mostly forgotten these days, or vaguely mentioned during some conversations with Davaoeños. The story of Mintal, the Japanese presence, and their contribution to contemporary life and culture is totally disregarded—a pity since this is such a crucial part of Davao history.

Mintal is an example of forgotten heritage.

Mintal is commonly known as “Little Tokyo” but there is little to remind one of Tokyo. In fact, the town looks like any other typical town along any Philippine highway: tired, dusty and sleepy.

Nothing but a few decaying Japanese monuments—graveyard steele inscribed with Japanese characters in the cemetery, a concrete pyramid (badly broken down) next to a chipped obelisk memorial to Ohta Kyosaburo located in what is now the public school football field.

Only the ruined bottom of the front steps of the former hospital remains, hidden away in the back of the public market that has taken over the original hospital site.

The heritage possibilities for a barrio like Mintal are endless. But first, the residents have to rediscover and relive their Japanese heritage, the very thing that gives them the cultural significance that sets them apart from their neighbors.

Once the cultural significance is rediscovered, pride of place sets in, It is the touchstone to community redevelopment, for additional income generating projects, for locals to “own” their barrio and look out for its future.

Think of Vigan. Once the locals rediscovered the uniqueness of their city, doors and possibilities opened up: houses were restored and re-used for different purposes, plazas and streets were improved, new businesses blossomed, and tourists started coming in droves.

Davao is a city of migrants, of people who have settled there from all over the Philippines. Among its earliest and most influential migrant groups were the Japanese, who deserve more thanks and recognition for their legacy than what they receive today.

There are many Mintals in the Philippines, many towns or districts whose uniqueness has been covered by the dust of time. These places are just waiting for you to lead in its rediscovery. Who knows what treasures are waiting to be found?