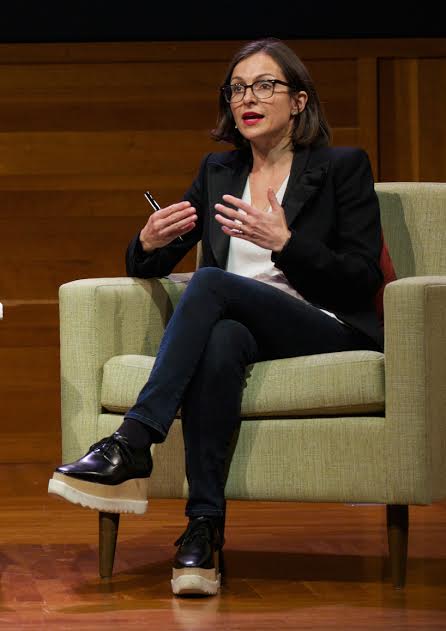 Sarah Thornton sees the complexity behind the beauty. The Canadian writer, who has degrees in sociology and art history, has been devoting that attention on the art world to great acclaim.

Her portfolio is immediately impressive, having written for ArtForum, The Guardian and The New Yorker. Most notably, she was chief correspondent on contemporary art for The Economist. Her 2008 book, “Seven Days in the Art World,” gave readers a glimpse of what goes on and who does what in the mysterious realm of art dealers and auctions. The book went on to be named by the New York Times as one of the best books of the year and is now available in 20 languages. She followed this up with the artist-centric “33Artists in 3 Acts.”

She is the sharp observer and resonant voice when it comes to peeling back the canvas and finding out what’s inside the frames of the art community. It’s something she seeks to share with readers everywhere. Thornton will be giving a talk and signing books as part of this year’s Art Fair Philippines. The Inquirer interviewed her through e-mail. Here are excerpts:

What made you decide to focus particularly on the world of fine arts as a writer?

Many years ago, when I was doing my undergraduate degree in art history, I had a summer job in an art gallery. I was struck by the huge gap between the university course (which barely mentioned the word “curator” or “dealer”) and my gallery work. Many years later, after acquiring my PhD in sociology and learning how to research social worlds systematically, I rediscovered my love of contemporary art and realized how I could make a contribution. Most art books focus on the artwork itself, offering no explanation as to how it arrives in the museum or how it commands a high price at auction. They refuse to examine how people outside the picture frame influence our perception of the work inside it. I saw a gap in the literature, so I wrote “Seven Days in the Art World” and “33 Artists in 3 Acts” to explain in an entertaining and educational way how the art world works.

There are many interesting details you chronicle in “Seven Days.” You say: “The social world surrounding art is often disdained as an irrelevant contaminant.” Do you think this aspect has grown further or deteriorated in today’s art environment?

I think the art world is less frowned down upon than it used to be. There is growing recognition of the positive impact that dealers and collectors have on artists’ lives and work. It is still very frustrating for artists who have not received the attention they feel they deserve (they tend to hate the art world bitterly), but being an artist is like being an actor or a writer; it is a very competitive field.

Further, it seems (particularly with the collectors and the makers of the art in “Seven Days”), that the people involved in the art world really do seem to be living in a completely different reality than those outside the art world. Is this true?

Collectors of high-end art can be exceedingly rich; when they descend from their private jets, they seem to have arrived from a luxurious other world. Artists cultivate their own worlds as creative places to make work that helps us look at the world in another way. For both these reasons, the art world can feel unreal or surreal.

What do you think is the biggest misconception people have about the art world?

The biggest misconception is that it is all about money. There are much easier ways to make a lot more money.

What would you consider the most important emerging trend in art?

In America, in the aftermath of the election of Donald Trump, art that makes some oblique political gesture, whether it is about global warming or equal rights for women or Muslims, seems to be in vogue.

What then would you consider the most damaging threat or aspect in the art world?

I see the art world as a generally positive force in society. It is a pluralist subculture in which artists and others would like to make the world a better

—or at least more beautiful—place.

What are you busy with now? Are you working on a new book or project?

I moved from London to San Francisco three years ago. While I write about public and private museums, I am also researching a book about tech culture, tentatively titled “Seven Days in Silicon Valley.”

Sarah Thornton will have a talk and book signing at Art Fair Philippines on Feb. 17, 5 p.m., at the Roofdeck, The Link Carpark, Ayala Center, Makati.