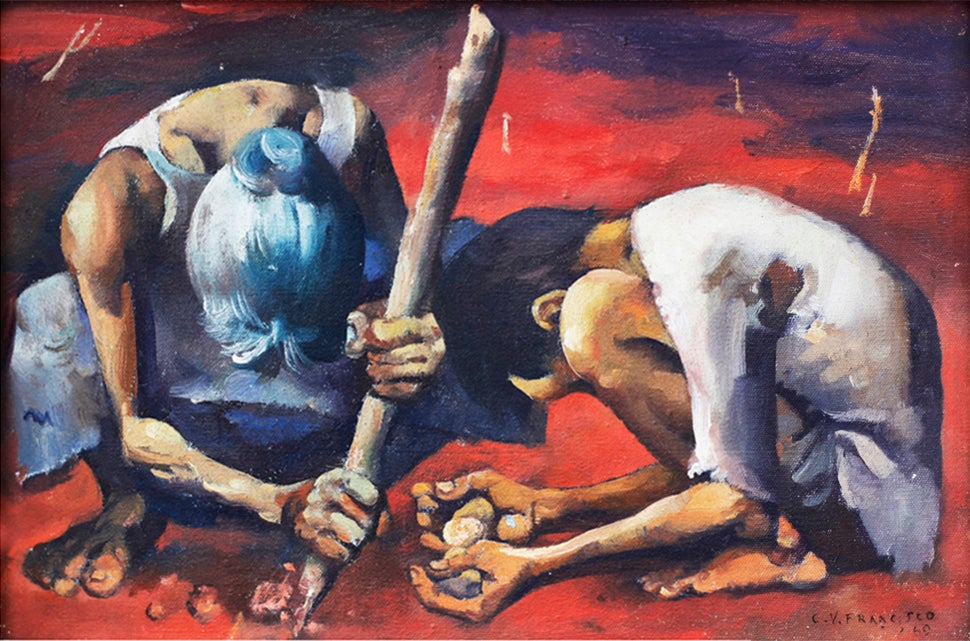 Botong’s study for ‘Camote Diggers,’ Ventura’s ‘Conquest,’ up for auction; P3M each

One of the highlights is Ronald Ventura’s 2011 oil-on-canvas “Conquest,” which showcases the artist’s stylistic predilections for the sensual and the obscure. “Conquest” was among the highlights of Ventura’s stunning collection of works for his 2011 show “A Thousand Islands.” It has as a starting price of P3 million.

Cabrera’s 1970 ink-and-acrylic-on-paper “Imaginary Portrait of Sabel” features central geometric portal or door, which would become a recurring geometric motif in his other works. The painting has a starting bid of P1.6 million.

Saprid’s untitled brass sculpture, which depicts bodies in motion, has a starting bid of P800,000.

Castrillo’s brass sculpture plays with abstracted figures in a three-dimensional medium. It will be sold starting at P70,000.

Perhaps the most noted modern work up for auction is Carlos “Botong” Francisco’s “Camote Diggers.” This is a study for the National Artist’s 1969 work “The Camote Eaters.”

“The gritty resolve behind depicting bent backs and scrawny arms working on the soil still reveals Botong’s grace of untutored ease,” the catalogue notes. “It is typical of Botong’s works in which his rendering of natural appearances is far from his early linear paintings where lines and human contours appear like cutouts, and gave way to a kind of expressionism all his own.”

Elmer Borlongan’s 2013 acryclic-on-canvas “Circumaural” displays both his intellectual playfulness and darkly idiosyncratic sense of humor. It has a starting bid of P1 million.

Rodel Tapaya’s 2008 oil-on-canvas “Ana, Mona, Lisa” fuses together themes of folklore and myth, translating them in his inimitable and highly colorful visual language. It has a starting price of P300,000.

Buen Calubayan’s oil-on-canvas “Palabas / Papasok” is distinguished by an energetic simplicity of line and color. An outspoken critic of social institutions, Calubayan looks into the dramatic abstraction of time and place in his art. Initial bidding price is at P1 million.

Emmanuel Garibay alludes to the lives and struggles of the impoverished through his oil-on-canvas “Jeepney Passengers.” Part of his “Jeepney” series, the painting is a take on the issue of social class. It has a starting bid of P300,000.

Another work by Garibay is a 2005 untitled work in mixed-media, which shows the hustle and bustle in front of the church at night. It also has a starting bid of P300,000.

Mark Justiniani’s 2005 oil-on-canvas “Book Reader” depicts a white man sitting on top of a brown man’s back. In his work, Justiniani suggests the strong colonial oppression felt by the Filipino people. The painting has a starting price of P200,000.

Jigger Cruz’s oil-on-canvas “Embrace of Dunchampiant” has a starting price of P300,000.

Lynyrd Paras’ 2004 oil-on-canvas “When Love Holds Everything,” which depicts a pensive woman looking at a portait, has a starting price of P120,000.

Joven Mansit repainted actual historical images for his 2008 oil-on-canvas “Lola.” It has a starting price of P400,000. —CONTRIBUTED