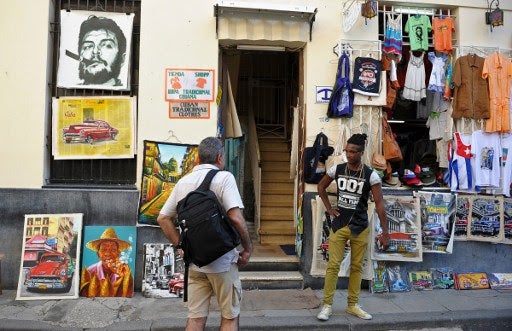 A tourist looks at a store in a street of Havana, on January 26, 2017. Cuba is in style since there was an approach in its relationship with the United States, its demand grew and its prices rose. Tourists now travel to one of the most expensive destinations in the Caribbean. / AFP PHOTO / YAMIL LAGE / TO GO WITH AFP STORY BY RIGOBERTO DIAZ

Could anything be better than a winter getaway to Cuba, complete with a stay in one of the Caribbean island’s five-star luxury hotels?

Actually, yes, say many of the tourists flocking to the Caribbean’s new “it” destination, who complain the state-owned hotel industry is underwhelming and overpriced.

Tourists have been flooding Cuba ever since its historic rapprochement with the United States was announced in December 2014.

That has sent prices soaring.

But, in a country where limited supply and years of underinvestment are hallmarks of the hotel industry, price doesn’t necessarily mean quality.

Jean Orsini, a French tourist, found his room had a rust-stained shower, and spent so long waiting for his dinner that he nearly gave up.

“At the travel agency in Marseille, they told us they were sending us to the best hotel. But you pay 175 euros a night, and you just know it’s not worth the price,” said the 82-year-old retiree.

Spanish tourist Pilar Esteras was appalled by the staff’s nonchalance at her hotel. Maria Teresa Gutierrez of Colombia had no running water at times and found her $250 a night room was less than clean.

Yet all three tourists stayed in four- and five-star hotels.

Their experiences are an indication of the industry’s problems in Cuba, even though the state now co-manages many hotels with foreign companies such as Accor of France, Iberostar of Spain and Blue Diamond of Canada.

In fact, 17 private companies operate two-thirds of the hotels in Cuba.

But they have little control over things like infrastructure maintenance and the availability of good staff in a country where hospitality training is scarce and wages are meager — less than $30 a month.

Orsini said his Cuba trip reminded him of traveling in the former Soviet Union in the 1960s.

“You spent three hours waiting to eat,” he said. “Since they were state restaurants, the staff could have cared less.”

But if anything, surging demand has only stretched the hotels’ staff and resources further.

“The value-for-money issue… causes a lot of complaints,” said a European hotel manager in Havana, speaking on condition of anonymity.

Some are even more blunt.

“Four-star rooms (in Cuba) are equivalent to a barely three-star hotel in Paris,” said Stephane Ferrux, a Frenchman who runs a travel agency in Havana.

The tourism ministry and the army — the sole owners of Cuba’s hotels — are aware of the threat this perception poses.

But the sector faces tough competition from other Caribbean destinations such as the Bahamas and the Dominican Republic, which have more experience catering to foreign clients’ expectations.

But she announced no specific plans.

There is, however, an alternative to state hotels.

Since 1997, the communist government has allowed private citizens to host tourists in their homes — so-called “casas particulares.”

But don’t look there for bargains — the best are often full, and charge upwards of $500 a night.