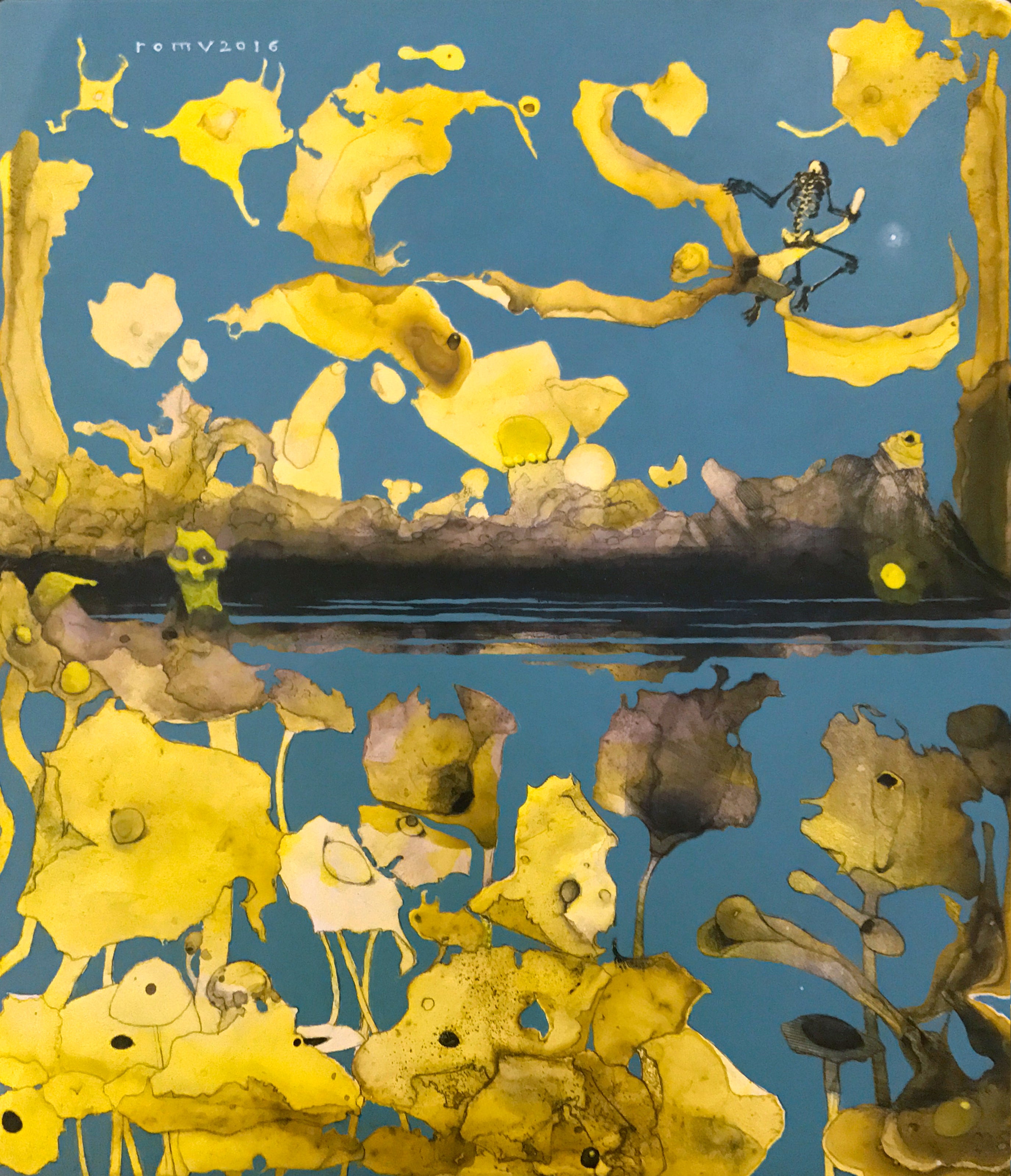 Visual artist Rom Villaseran has made a name for himself with otherworldly landscapes populated by intricately detailed flora, fauna, and the occasional vestige of human life.

After joining the roster of Galerie Stephanie in 2012, Villaseran has held one exhibition after another, beginning with a solo exhibition in 2014, “Orchestra.” Villaseran finally slowed down in early 2016 when he returned to home base for Art Fair Philippines and was rapturously greeted by his clients.

This was Villaseran’s life as viewed from the crowd. Behind the scene was a different story. The nonstop workload was taking a heavy toll on him and his home life, which he shared with wife Kara de Dios, herself a visual artist.

Suffering from frantic and seemingly unexplainable mood swings, he decided the solution was to shift artistic gears.

“I just wanted to talk about something else,” he says. “I didn’t know how it would work out, but the safest way to start the entire series was to begin it with something that meant a lot to me.”

He is describing the process that led to the 5×4 ft painting of his wife, Kara.

Titled “Sibol” (Germination), the striking monochromatic work is a portrait of Kara wearing what appears to be a plush fur coat she clutches to her bosom. From its soft hairs emerges a blooming yellow flower being pollinated by a bright yellow bumblebee.

The flower and the bees are the only spots of color in the piece—a motif that spread over the new series that was to become Villaseran’s latest solo exhibit, “Ilaw ng Buwan” (Light of the Moon).

After “Sibol,” Kara convinced him to go to therapy after he was diagnosed with bipolar disorder. He finally knew why he could never seem to fit in. Once he started painting about himself, he found he couldn’t stop.

“This is probably the one time I’m going to do this. It’s too taxing for me,” Villaseran confesses.

Indeed, “Ilaw ng Buwan” could be taxing even for a viewer.   Villaseran is right to favor the magic of nighttime, his craft allowing him to illuminate the darkest depths of the human heart.

“Ilaw ng Buwan” is quite personal, yet it is also a story about all of us. Villaseran might be one of the few with “wiring in [his] brain that’s not right,” but he is not alone in being human. —CONTRIBUTED