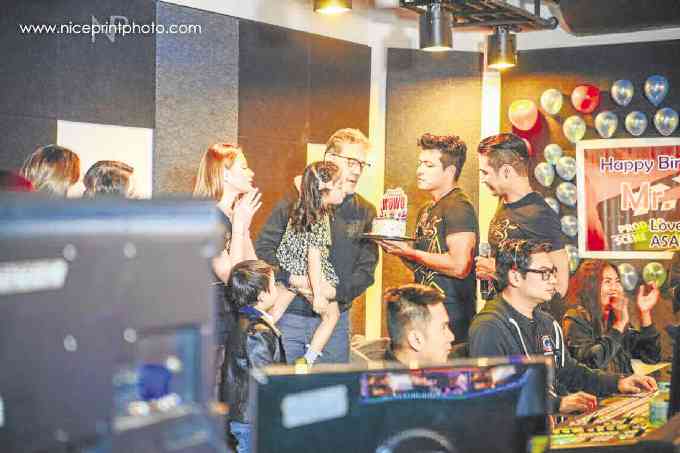 The making of an ‘ASAP’ stage mom

I grew up around show business. My mom was writer, director, producer, and my dad a TV and film director.

My sister and I tagged along any show my parents were working on, from beauty pageants, variety shows and TV specials, to documentaries made in the mountains, or movie sets. All this was very normal for us.

People are surprised that neither my sister nor myself ended up as an artista. Growing up, we were always asked why we didn’t, and it was simple: My parents didn’t want us to.

My dad, who made a name for himself molding stars, always told us that to be a star was really grueling, hard work. Those who do it seriously want it.

He knew how hard it is to be an actor—long working hours, lack of sleep, tough work conditions. The job can disrupt one’s normal childhood.

To compensate, my dad always tried to establish a sense of normalcy among his talents. He developed a distance learning center where tutors helped young actors finish high school. He taught them how to invest, and even exposed them to art and architecture. This wasn’t the life he wanted for us, though.

They say that certain things are “in the blood.” And try as we might to fight it, I’m afraid show business is in our blood.

My grandmother, Elvira Manahan, was a television host; my uncle and cousins were all theater actors; my mom a dancer, theater actress, writer, director.

I started seeing signs of a performer in my son, Jaime, when he was 2 years old. He loved to sing and dance in front of people.

Over the years his urge to perform has only gotten stronger. When “ASAP” called to ask if my kids could do something for my dad’s birthday celebration, I thought it would be a great way to hit two birds with one stone—surprise my dad and let Jaime have an opportunity of a lifetime performing on the biggest weekend noontime show on television today.

Jaime had performed in school productions and dance recitals, but none of those came close to the pace of a live show. He was used to having a teacher walk him through several steps to do multiple rehearsals. I knew that the pace of “ASAP” was much faster than that, and that he would not get as much time to practice.

I was sent the list of people dancing with him. They were all big stars of ABS-CBN, and then my little boy was the finale. I requested for extra practice time for Jaime, with the dance team whose members were all so patient with him.

We had two rehearsals, one hour each, before the actual show.

This was where my dance-mom tendencies kicked in. We filmed each practice with the choreographers and had him rehearse at home. We practiced in our living room first thing in the morning, and then all afternoon after school.

I felt myself become the stage mother that my dad was so wary of when he worked with young kids during “Ang TV” days.

But I finally understood the stars. They would sit for 12 hours in their vans equipped with amenities, baon, portable fans, picnic baskets and anything you would need in a TV studio.

I distinctly remember sitting in the vans of Camille Pratts and Angelica Panganiban when my dad was making a movie with them; their mothers offered us snacks and games while waiting. I was always amazed at how the stars had everything, and how they just sat there and waited.

When this happened to me for the first time last summer at Jaime’s first recital, I realized the immense sacrifice parents of performers make just to see their kids realize their dream. It doesn’t feel like sacrifice at all, actually, when you are doing it for your child.

I also became that mom who carries everything with her: coolers full of food, games and everything to make waiting more comfortable backstage.

Watching them perform gives me a incomparable sense of pride. You see them start from nothing, you sit for hours to practice and drive to distant locations to rehearse. Seeing them perform for a few minutes is the culmination of weeks of hard work.

Before the show, the dancers and choreographers came by our dressing room several times to run Jaime through the steps again.

He was ready. It was I who was nervous. I wasn’t sure how he would take to the chaos of backstage, the lights, the audience and literally being thrust into the spotlight.

Since this was a surprise for my dad, my husband, yaya and I had to be hidden from the cameras until it was a few seconds before Jaime was set to dance. When we heard the music to his spot number coming on, we were brought to the front of the stage where we could see him.

When he came out and started dancing, hitting every mark perfectly, I completely lost it. Jaime’s achievement unlocked a different sense of pride in me as a mother.

I couldn’t believe what he had accomplished. I told my husband, now I understand the emotions of young teenage girls who idolize Justin Bieber—the ones who scream and cry and are a mess—because that was what I did when I saw my son up onstage with a full force of dancers, lights, effects, the whole show.

My heart swelled, I was yelling and cheering and so full of joy. It seemed I was jumping and possibly crying at the same time. I even lost an earring because I was jumping around so much. But it didn’t matter at all.

I was watching the big LED screen on the background as my daughter was in the booth bringing my dad a surprise cake, with some of Star Magic’s biggest stars.

We told her she had the most important job of bringing him the cake.

My little one is the shy type among the two, so for her to walk through the booth amid the lights and superstars carrying a cake was amazing. My husband and I were so engrossed in watching the kids that we didn’t realize we were on camera, too.

As I look at the photos now, I see the face of a very proud fan.

I think the secret of a stage mom is that she wants it almost as badly as her child does, if not more.

I used to think this was being pushy and self-serving, but I’ve come to realize it’s about wanting so much for your child, wanting him or her to succeed and fulfill his or her potential, such that you would go to great lengths for them.