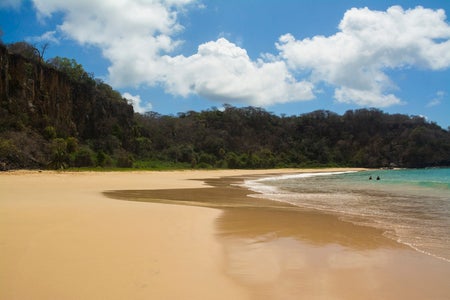 If there’s one single beach that leaves visitors enamored, recharged and inspired, it’s Baia do Sancho in Brazil, which captured the title of world’s best beach by TripAdvisor travelers for a third time.

After being momentarily knocked off its perch by Grace Bay in Turks and Caicos last year, the Brazilian beach on the Fernando de Noronha archipelago, a UNESCO World Heritage Site, recaptured the title in the 2017 edition of the TripAdvisor Travelers’ Choice Awards for Best Beaches.

Praised for its dramatic cliffs, turquoise waters, and reclusiveness, the beach is popular among surfers and snorkelers for its teeming marine underworld.

Gaining access to this paradisiacal beach, however, requires work: Visitors must descend a tall, steep staircase between two rocks.

The area itself was designated a UNESCO World Heritage site in 2001 for being home to the largest concentration of tropical seabirds in the Western Atlantic, while the waters are important for the breeding and feeding of tuna, shark and other marine mammals.

The area is also home to Dolphin Bay, the only known place in the world with such a large population of resident dolphins.

Rounding out the top three spots are Grace Bay in Turks and Caicos and Eagle Beach in Aruba.

TripAdvisor also broke down the best beaches in Europe, with La Concha Beach in San-Sebastian, Spain, taking the top title.

Here are the top 10 beaches in the world, 2017, according to TripAdvisor:

Moving up to the value chain in tourism