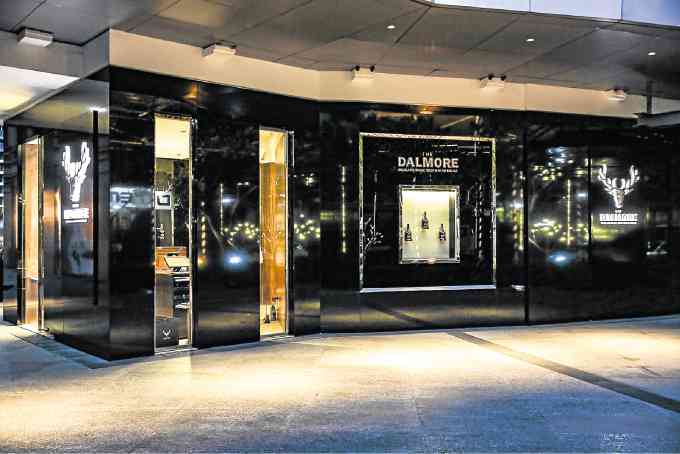 In the same league as Patek Philippe and Bentley: ‘Liquid gold’ comes to Manila

With no fanfare at all, The Dalmore is opening today its first Asian flagship store at Uptown Parade in Bonifacio Global City.

The luxury brand has its origins in 19th-century Scotland where it is synonymous to rare and exclusive single-malt whiskeys. It is known worldwide as a producer of “liquid gold.”

Adam Knox, British whisky expert at The Dalmore, is in town for the opening. He apprenticed under iconic distiller Richard Patterson for two years after graduating from university.

“I got my first taste of blended whisky when I was 8 years old,” Knox told Inquirer Lifestyle. “My grandfather used to have this display cabinet with whiskeys from different regions.”

With its beautiful backlighting and crystal glassware, it was a veritable cabinet of wonders for Knox and his older brother.

“We would open it, smell the whiskeys and try to find out what it was about,” Knox said. “Our grandfather gave us a taste when we were kids. It’s normal in Scotland. There’s even a saying that drinking whisky will ‘put hairs on your chest.’”

Knox recalled it was this first experience—the sight, smell and taste of whisky—that piqued his interest and eventually led him to his current job.

The flagship, whose entrance faces away from the street, is a jewel box of a store—all-wood paneling, shiny glass and beveled steel.

The Constellation Collection, a display showcase of 21 bottles mounted on the wall, greets customers. Valued at P18 million, the rare set (there are only five existing sets worldwide; last year there were 17) is an assemblage of natural cask-strength whiskeys from 1964 to 1992.

In shades that range from a light, wheat-like tint to a rich, dark sherry, the Constellation is also a guide to how the different types of casks used provide color as well as flavor to the whisky. While some bottles from the Constellation can be bought singly, others are not for sale.

“If they want a particular bottle that isn’t sold separately, they have to buy the complete set,” said Glenn Manlapaz, managing director for Asia-Pacific at Emperador Distillers, Inc.

In front of the showcase is a small table where Knox conducts tasting sessions for VIPs. Each is handed a special glass, a small copita that allows one to smell the whisky. Unlike brandy snifters that have a wide rim, The Dalmore’s copita is small and tulip-shaped, with just enough space to stick one’s nose in.

“I then instruct them to sniff from left to right, first with their mouths closed, and then again with mouths open. This way, they really get to smell the bouquet,” Knox said. Since the point is to appreciate all the nuances of the single-malt, they are told to sip, not gulp, swirl it in their mouths, and allow it to warm up before swallowing.

The store, done by an interior design company that has also made the flagship stores of Chanel and Hermés, is divided into three sections. On the right is the selling area where “expressions” of The Dalmore are grouped according to age (12, 15, 20, 25 years old) and rarity.

A 50-year-old expression, retailing at P3.5 million and created by Richard Patterson to mark his 50 years as a distiller, is housed in a handmade box by Linley of London, and comes with a set of Baccarat crystal glasses. Only 50 bottles were made and put on sale.

Even before the store opening, Manlapaz had already managed to sell the bottle to a Filipino buyer who was aware that The Dalmore was going to come out with a 50-year expression.

“The buyer was in the know,” said Manlapaz, “so when I offered it to him, he said yes. There were three other Filipinos who were willing to buy it, but the first one I offered it to said he’d get it. My only condition was that he could bring it home only after six months, because I needed it to be displayed at the store.”

Also on display in the retail area is a hunting companion, a walnut box made by Holland & Holland that Knox said would be perfect “if you go hunting or golfing. You can also take it on picnics, because it has separate areas for eight glasses and four bottles of The Dalmore whisky.” The box alone is priced at P160,000.

At the other end of the store is the Keeper’s Den, a small room that can accommodate four people at a time, six maximum. One wall is devoted to 84 bottles glassed in vaults.

“Members of the Keeper’s Den have to be invited. They must then buy a bottle that’s 25 years old and above, and keep it there. Membership is good for one year but renewable,” Knox said.

Members can entertain guests in the den as long as they book the space in advance. It can be booked from 1 to 6 p.m., and from 7 p.m. till midnight daily. The room can hold small meetings; it is equipped with a small powder room, and free snacks are served members.

The Dalmore is at Uptown Parade in Bonifacio Global City.