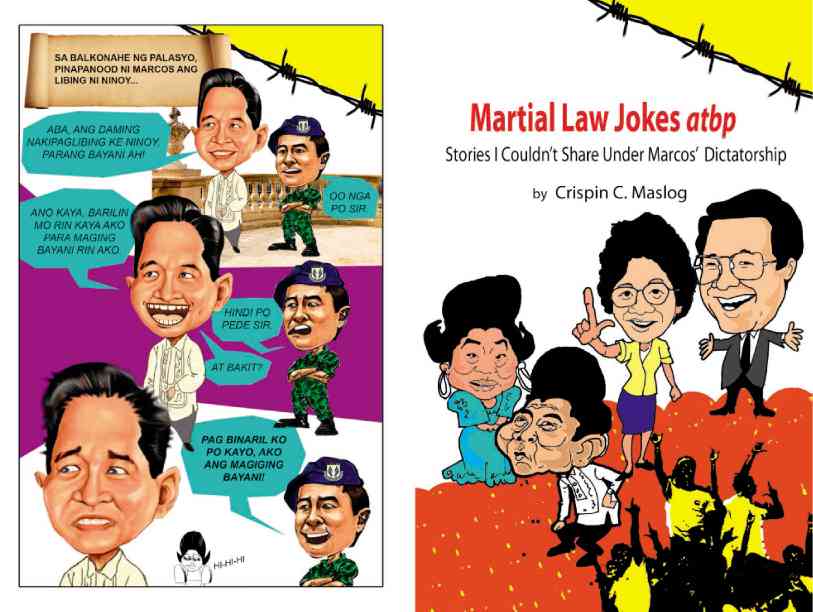 One of the earliest anecdotes about martial law was how then popular TV host Ariel Ureta was arrested and made to bike around Manila for tweaking that era’s slogan: “Sa ikauunlad ng bayan, disciplina ang kailangan.”

True or not, what became urban legend also had a chilling effect on the country’s sense of humor, with jokes and puns about martial law, the Marcoses, Gen. Fabian Ver, and later Sen. Ninoy Aquino and Rolando Galman, flourishing only through whispers and knowing winks.

Which explains the recent release of Dr. Crispin Maslog’s “Martial Law Jokes at Iba Pa: Stories I Couldn’t Share Under Marcos’ Dictatorship,” a collection of jokes that people traded freely among themselves in private conversations, but dared not publish during those dark years.

The jokes mocked the Marcoses’ known penchant for grandeur and extravagance, the former first lady’s insatiable lust for pomp and circumstance,Ver’s dull wit, and later, after the Aquino assassination in 1983, the government’s inept handling of the airport incident and of fall guy Galman.

The opposition’s quick and smart-alecky comeback to Marcos decrees and pronouncements—which would have landed them in jail had they been uttered during martial law—are also documented in this slim volume.

The book by communication professor Maslog, “is a precious record of how Filipinos managed to learn truthful trends despite the dictatorship,” wrote Alice C. Villadolid in her foreword.

“… Thanks to the good humor which is natural to most Filipinos, conversations or jokes that were not being watched or recorded on site became a vehicle for conveying truthful developments. Danger from agents of the dictatorship emerged when they arrested and interrogated veteran newsman Toto Olivera after he ended his speech at the Manila Overseas Press Club with a joke about the Dictator, “the foreword added.

Maslog noted that after the Aquino assassination, “when it became apparent that the Marcos government was (somehow involved) … (and being) unable to take up arms to oust the dictator, people expressed their indignation in the form of jokes and satirical songs and rhymes, a medium for people’s emotional release, their way of venting their emotions to hit back at the dictator.”

Like most people, Maslog gathered some of those jokes, told and retold them privately, and forgot about them when Marcos was kicked out at the 1986 Edsa People Power Revolution … “until one day, we came upon them by accident as we ransacked our files while researching for our papers and books.”

But aside from provoking laughter, “let this book remind everyone of that horrible era in Philippine history when a tyrant once ruled and plundered the country, and the people were speechless and reduced to sharing jokes in whispers. We hope, however, that many readers of this book would still remember the context in which the jokes were invented, told and retold,”  he added.

To make sure of that, Maslog had extensive footnotes to explain the background behind the jokes. And for good measure, there are six appendices that dwell briefly but substantially on contentious events and issues during martial law that have become favorite subjects for alternative facts in social media.

Some of the jokes may sound dated among those who have heard them all before, but the incisive information in the appendices alone makes this publication worth your while.

The book, Maslog writes, is also a timely reminder to today’s generation “that once upon a time they did not have the freedom to express themselves freely as they do now.”  —PAC