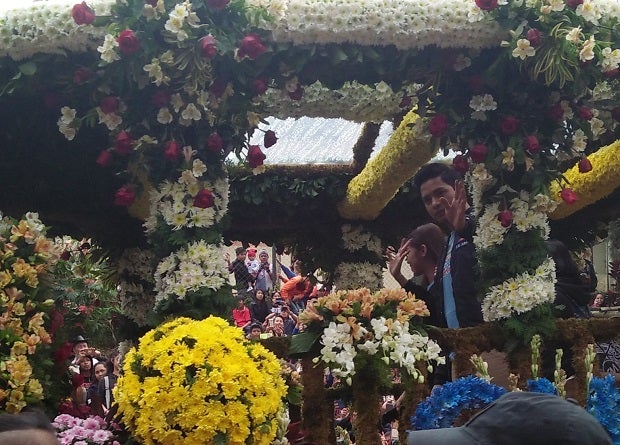 GMA artist Alden Richards (right) and Maine Mendoza of the Aldub fame wave to the crowd during the Panagbenga Grand Parade on Sunday, Feb. 26, 2017. GOBLETH MOULIC

BAGUIO CITY — The network war between ABS-CBN and GMA 7 was evident at the Panagbenga grand float parade here at 9 a.m. Sunday.

In their quest to draw attention of more than 10,000 spectators, ABS-CBN brought its young actors Bea Alonzo and Enchong Dee to compete with the more famous love team Alden Richards and Maine Mendoza dubbed as “Aldub.”

Alonzo was in town to promote its current soap “A Love to Last.”

READ: Bea Alonzo has found a love that lasts

Since the crowd reaction is everything to the rival networks, they did their best to outdo each other.

ABS-CBN, for example, brought a karaoke, a loud speaker and staged a mini concert, before and during the float parade.

An hour before the parade started, Alonzo and Dee entertained the crowd by taking turns singing OPM hits.

At some point, the two stars were jumping and dancing on their float. Dee also approached the crowd who wanted to have selfies with him.

The music was so loud that it often drowned the performance of the drum and bugle corps before them.

GMA-7, on the other hand, did not bring anything to entertain the people, composed of young and old, who traveled from various parts of the country to watch the float parade.

The presence alone of Richards and Mendoza was enough for the people to go wild.

Policemen restrained the crowd from approaching Richards who accommodated the request of the fans for selfies.

Richards had to step out of GMA’s float several times to approach the crowd because his face was covered by the float’s design.

The “Aldub” attended Panagbenga, the city’s largest crowd-drawer, to promote their new soap “Destined to be Yours.” CBB