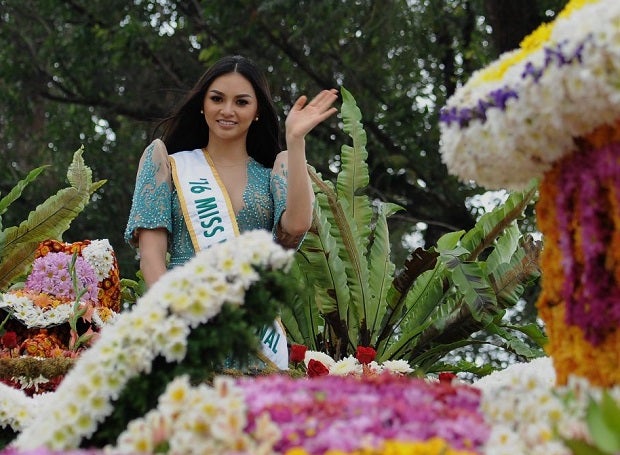 2016 Miss International Kylie Versoza rides on the float of Pepsi Cola Products Philippines Inc. This is the first time that Versoza, native of Baguio City, paraded the streets of Baguio since she won Miss International in October last year in Tokyo, Japan. Pix by EV Espiritu, Northern Luzon Bureau

BAGUIO CITY — Miss International 2016 Kylie Versoza and other celebrities lent their glitter to the various floats that competed in the grand parade of the 22nd Panagbenga Festival here on Sunday morning.

It was the first time that Versoza, wearing a beaded terno, paraded the streets of Baguio since she won Miss International in Tokyo, Japan, last year.

Fans mobbed Rosales as he climbed the float at 9 a.m. After waving to the crowd, he grabbed his DSLR camera and took photos of his shrieking fans.

Taulava and Guiao walked around their float and mingled with spectators, signed autographs and took selfies.

Carrot Man Jeyrick Sigmaton, a social media star who was discovered in Barlig, Mountain Province, drew cheers from the crowd from various indigenous groups in Cordillera.