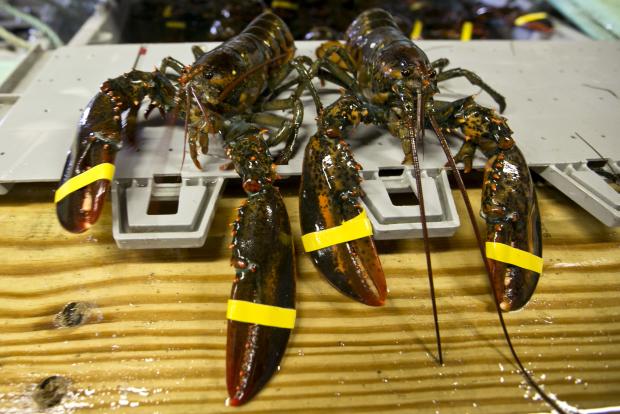 In this photo, taken June 12, 2015, lobster are seen at the Clam Shack in Kennebunkport, Maine. The state’s lobstermen set a record for the value of the lobster catch for the seventh year in a row. Maine lobsters were worth a little more than $533 million at the docks in 2016, exceeding the previous year’s record total by more than $30 million, Marine Resources Commissioner Patrick Keliher said. (Photo by ROBERT F. BUKATY/AP)

ROCKPORT, Maine — For the seventh year in a row, Maine lobstermen have set a record for the value of their lobster catch.

Maine lobsters were worth a little more than $533 million at the docks in 2016, exceeding the previous year’s record by more than $30 million, Marine Resources Commissioner Patrick Keliher said Friday.

Interest in American lobsters has skyrocketed in Asia, especially China, in recent years, aiding the value of the crustaceans, which remain popular with Americans on summer vacation and Europeans at Christmas.

At the same time, US lobster fishermen have been catching more lobsters. Maine also set a record for volume in 2016, with state fishermen catching nearly 131 million pounds of lobster last year. That surpassed the previous record of nearly 128 million in 2013.

Conservative management of the lobster fishery has allowed the fishery to thrive in recent years, regulators said. Scientists have said warming oceans might also play a role, as the center of the lobster population appears to be moving north as waters warm. The catch off of Rhode Island and Connecticut has plummeted as Maine’s has soared.

“You can’t leave warming water out of the conversation,” Keliher said at the Maine Fishermen’s Forum, the industry’s annual summit.

Maine’s lobster catch has been climbing in value and volume for several years, with the state surpassing 100 million pounds for the first time in 2011. The total value of the catch at the dock leaped from less than $240 million in 2009 to more than $315 million in 2010 and has continued to climb since.

But David Cousens, a South Thomaston lobsterman and the president of the Maine Lobstermen’s Association, cautions that the trend is unlikely to continue and says “we need to prepare for the future.”

Cousens notes that Maine’s lobster population is dependent on baby lobster settlement, which is the process by which young lobsters reach the ocean floor and grow. Some recent years have shown poor settlement off Maine, according to data compiled by Rick Wahle, a marine ecologist with the University of Maine.

Keliher said the lobster catch has raised the value of the Atlantic herring fishery, which supplies bait fish used by lobster fishermen. While the Atlantic herring catch dipped by about 10 percent last year, its value grew about 40 percent to more than $19 million, an all-time record. Maine’s softshell clams, scallops and haddock, which are popular food species, were worth only about $4 million more combined.

American lobsters are also caught off of other coastal New England states and New York, but Maine accounts for the bulk of the catch. Canadian fishermen also catch lobsters.

The total US catch was nearly 147 million in 2015 and more than 80 percent of the total came ashore in Maine, with Massachusetts making up most of the rest. The national lobster fishery also set a record in value in 2015 at more than $620 million. National numbers for 2016 haven’t yet been posted by the National Oceanic and Atmospheric Administration. –Patrick Whittle