Artist with blood on his hands | Inquirer Lifestyle ❮ ❯ 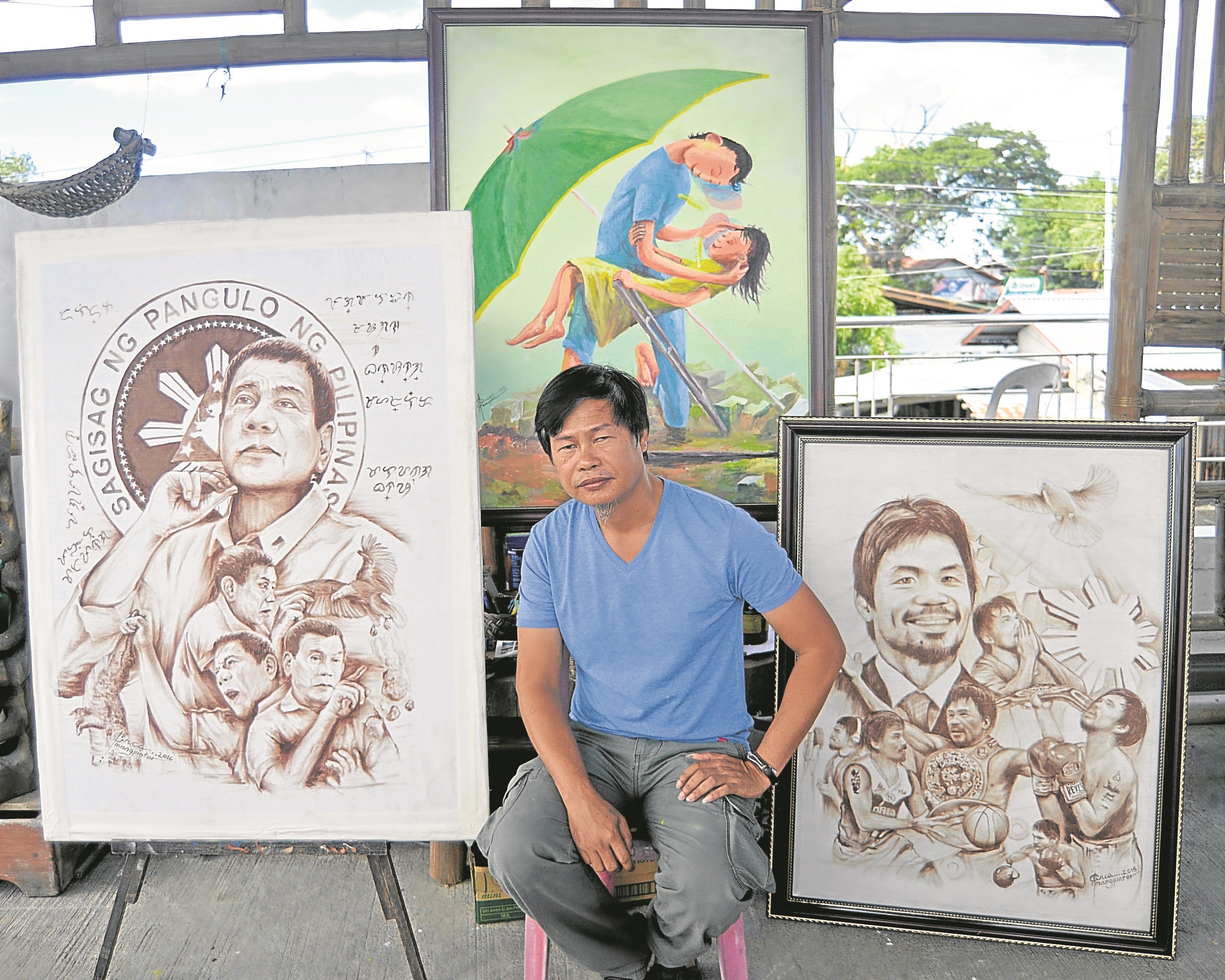 he artist at his atelier with his most popular works, one of which went viral online

Artist with blood on his hands

A folk artist who draws from—and is revered by—the folk community is Elito Villaflor Circa, the contemporary folk artist of Pantabangan town in Nueva Ecija.

Relatively young at 47, he is not only reverentially called “Amangpintor” (Father Painter) by his people; his artworks are also being collected internationally, some even housed by the Smithsonian American Art Museum. But he is proudest that they’re collected by his own people.

“Nakakalat ngayon sa buong Pantabangan,” he says, and points to the statuary at the entrance of Central Luzon State University in Muñoz City as based on his painting.

His paintings are thematic, often with historical and mythical subjects, using legends of his place to metaphorize the struggles of his people, the beauty of his hometown, the destruction of the environment.

He is also a folk historian. He writes articles about his town and has even created personalized comics about it. In fact, many of his paintings are records of life in Pantabangan since the 1970s, when the townsfolk were relocated uphill after their 300-year-old poblacion was submerged in water to create the reservoir of Pantabangan Dam.

He gained national renown after he posted on the internet popular images of President Duterte and boxer Manny Pacquiao that he painted with his own blood.

He did “Manny Pacquiao Hearted Fist” in 2015 during Pacquiao’s fight with Floyd Mayweather Jr. “President Rodrigo Duterte in the Center of the Triangle,” done last year after Mr. Duterte won the presidency, went viral online.

People had heard of solar painting, sand painting, and those using coffee and mud in lieu of pigment, but not many were aware there was such a thing as blood painting.

Circa paints using not only his blood as pigment but also his hair for texture on the canvas. With that, he made it to Ripley’s Believe It or Not.

He is an autodidact, with no formal training in art school. He graduated with a Bachelor of Science in Elementary Education degree from CLSU but ended up as a programmer-technician. He is an information system analyst at the Philippine Center for Mechanization and Development.

But he has always been creative since childhood. He recalls crafting his own toys from discarded pieces of wood and tin. He would sketch on the walls and doors of their house using charcoal from their stove.

He says he has been painting since he was eight years old. For canvas, he used old shirts, pillowcases, blankets. For mediums—“dagta ng kahoy, katas ng kamatis, toyo, mantika,” including extracts from fruits, onion, tuba, molasses, or any available material, even rust.

His father, a carpenter, would bring home surplus enamel paint and plywood for him to paint on, and helped him make brush using his own hair.

His first proper painting, done in 1978 and depicting a man in coat and tie with a tree in the background, is in mixed media of soy sauce, water, tinting colors, and enamel paint on plywood. He has done over 600 paintings since.

His first blood painting, created in 1992, is a nude self-portrait. He has done 30 blood paintings since, seven of them full-scale. He spends five hours to work on a piece, using 75-ml blood for a small one.

In 2009, he was recognized by the National Commission for Culture and the Arts as the first Filipino blood-and-hair painter.

His work is not exclusive to blood, though, as he is also into oil and acrylic, or pigment mixed with blood. If the canvas is not saturated with blood, it is at least signed with his blood.

Why blood? Because it symbolizes life, love and sacrifice—

and these, to him, an authentic work of art should involve.

Also, by signing each piece with his blood, considering the DNA principle, it will show that the work is truly his, notwithstanding the vicissitudes of time it may undergo.

Circa also popularizes hand-painting performance to music or band accompaniment, with views of nature as subject, using the three primary colors and white, and to be finished within 5-10 minutes. He also does finger-painting with his fingernails. He is often invited to perform in provincial events, school affairs, even weddings and birthdays.

He finds time to teach art to rural children. He has been pushing for an art movement of his own coinage—Indigenouism—which encourages local artists to use primary agricultural products as sources of mediums for painting.

Two years ago, as homage to the noble profession of teaching, he painted “A Thousand and One Lives.” Exactly 1,001 teachers and Department of Education employees participated in its creation, donating their hair and blood to be incorporated in the mural.