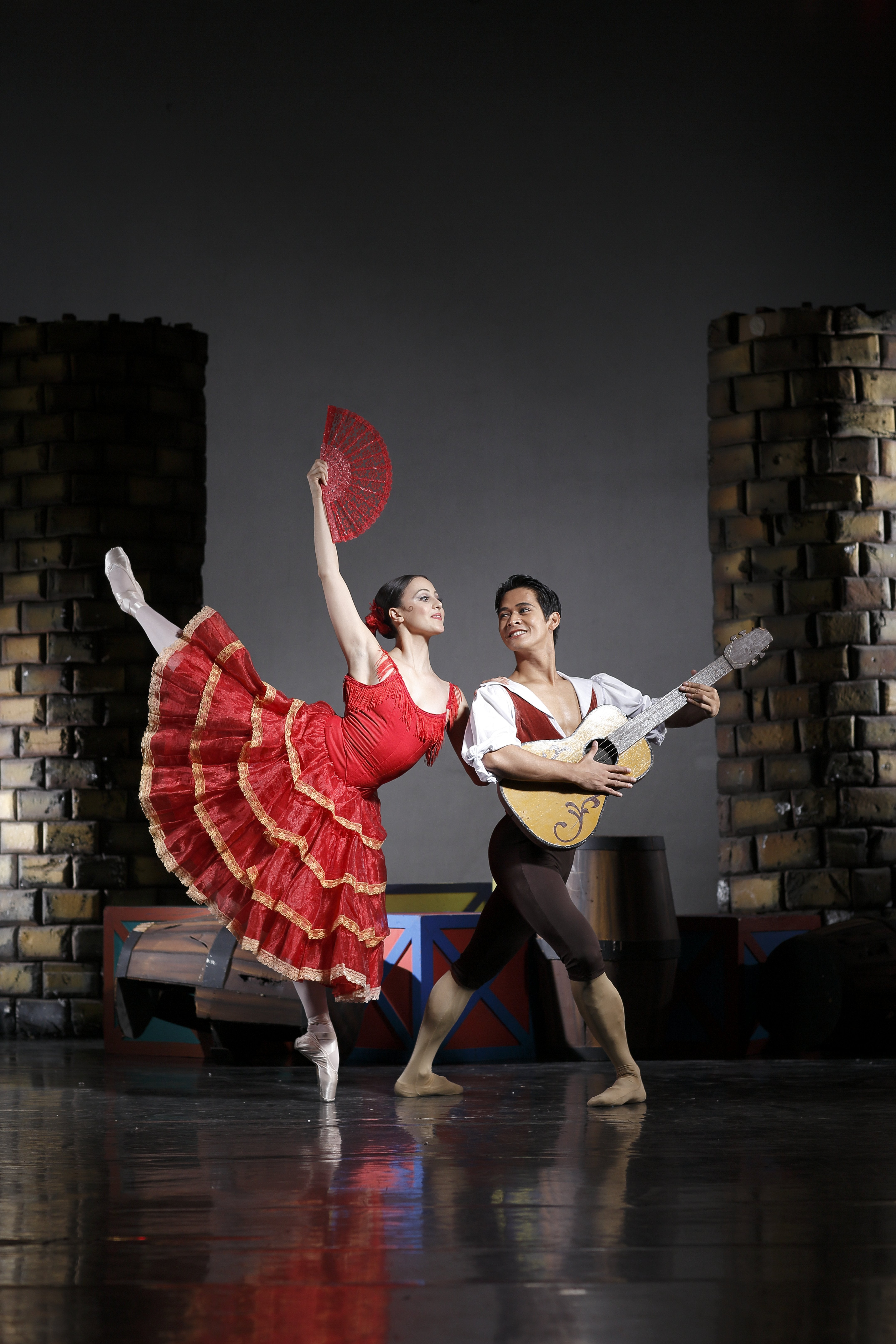 Since its debut in 1995, Ballet Manila has been staging classics that show consistent technical quality.

The recent staging of “Don Quixote,” based on 19th-century Russian choreographer Marius Petipa’s exhibition piece, was, as always, crowd-pleasing.

Petipa’s version plays down Cervantes’ novel “Don Quixote,” and relegates the eponymous character to a minor role. Instead, it focuses on the romance and adventures of Kitri, an innkeeper’s daughter, and her lover, Basilio.

For any company, the challenge in staging the ballet may be the audience’s over-familiarity with it and in how to make it look new. Ballet Manila met this challenge by endowing it with ballet stars.

Katherine Barkman, American import with Russian style training, debuted as Kitri. She seemed the most likely successor to her mentor, Lisa Macuja-Elizalde.

Although she’s not flashy like Elizalde in her youth, Barkman devoured the stage. The 20-year-old principal displayed tight footwork, neat jumps, secure multiple turns and an arched backbend. The turns on a diagonal line and supported pirouettes in the partnering were solid and precise.

Introspective, sheltered and classically refined, she made the effort to transform herself into a vivacious character.

In the vision scene, the lyrical choreography fit Barkman like second skin. After an evening of marathon virtuosic dancing, she knocked out passable fouettés or whiplash turns.

As an actress, Barkman was unpretentious: playful, and she danced with abandon as a spirited Kitri. Her focus was more intense than her scene partners.

Given time and more experiences in life, she can still evolve as Kitri and develop the subtle sensuality, romance and razzle-dazzle needed for this role.

Rudy de Dios as Basilio performed with clarity and security. His multiple pirouettes were suave, and the turning circuit jumps were consistent.   Although the skinny de Dios tended to blend with the corps, he made the effort to magnify his presence with exaggerated acting and movements.   As a strong partner, his grips were fail-safe, and he made his partner look feather-light in overhead lifts.

Abigail Oliveiro and Mark Sumaylo made an excellent pair as Mercedes, the street dancer, and Espada, the bullfighter.

Oliveiro, a Singporean-Australian, made a sultry siren imbued with confident technical dexterity and a backbend that nearly reached the floor.

Sumaylo projected elegance and machismo which transferred to the male corps.

Tiffany Chiang danced with rigor and attack as Amour in the vision scene. Her spotless footwork perfectly matched the music.

The male corps de ballet has always consistently performed with precision and extraordinary vitality. This was shown again in “Quixote.” The upcoming soloists were as strong and committed as the leads. The energy of the crowd scene was always infectiously exuberant.

But not everything was perfect on opening night. The Grand Pas Deux was anticlimactic. Barkman slipped on the floor but picked herself up to continue dancing with aplomb. The fish dive was awkward instead of a seamless surprise of a throw and catch.

Though strong and impeccable in technique, Joan Sia needs to mature and develop an imagination to make the Dryad Queen role more ethereal.

Gamache, Kitri’s rich suitor, wasn’t that well-portrayed as a buffoon and dandy.

Nevertheless, the audience saw nothing but spiffy and resilient dancing and the well-oiled machinery that is Ballet Manila. —CONTRIBUTED