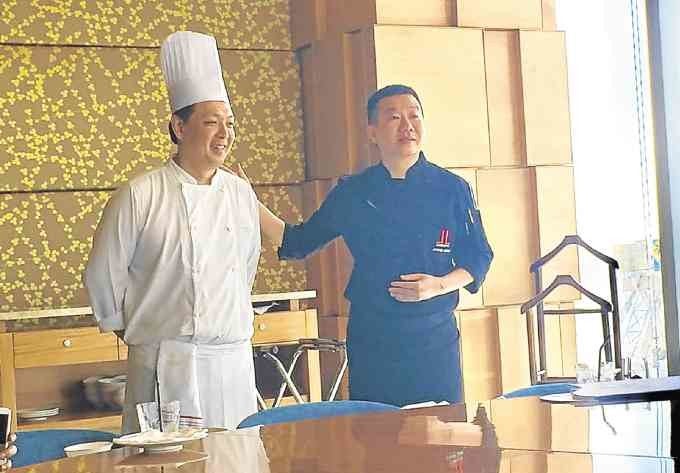 Chinese provincial cuisine presented as a ‘pretty lady. . . with finesse, but nevertheless Chinese’

Instead, Asian master chef Jereme Leung tweaks its presentation by playing off elements like temperature and timing, culture and backstory for an interesting culinary adventure—like what he did last week at Conrad Manila’s signature China Blue restaurant.

This was just his second quick visit to Manila; Leung served a seven-course, one-night-only gastronomic banquet to fans and foodies that he recreated for lifestyle reporters hours before flying out Monday night.

But why tinker with classical cuisine in the first place?

Leung, twice given the Five Star Diamond Award by the American Academy of Hospitality Science (2000 and 2008), likened his project to “a very pretty lady who comes out of the village for the first time. She is not sophisticated or refined.”

Leung, who has had stints as Chinese executive chef in multistar hotels in Indonesia, Singapore and Hong Kong, explained that what he does is “take the pretty lady, train her, dress her well, teach her to put makeup and how to speak well.”

Translate the pretty lady into classical provincial cuisine and Leung means: “The plate is something we present with finesse, but nevertheless Chinese.”

The first plate had three appetizers. Leung suggested that we start with the fluffy chicken and pork adobo spring rolls that were cooked on site.

The wrapper was crispy; and the filling, steaming hot. The adobo was mildly salty, not in-your-face, and one could feel the sinewy chicken flakes with the tongue.

The chef chose adobo as a nod to Filipino home cooking. The pork was cooked char-siu-style and oozed with gravy like the filling in a traditional pork bun.

Leung cooked the spring rolls on site for a reason.

“If I fried it in another kitchen, it would not taste the same. It needs to taste good and presentation needs to be a controlled act,” he told Lifestyle.

Presentation, of course, has become Leung’s trademark. This is what his “pretty lady” is all about.

“Temperature is a constant, that’s why the spring rolls were done here,” he explained. “A chef needs to understand when is the best time for food to reach your plate, to be eaten. But it’s not only about how good the food looks. Also the temperature, the distance, the time the food travels to your plate. It’s all about planning and understanding.”

He asked us to try next the crispy bean curd cone stuffed with mushrooms, apple, carrot “and a little touch of truffle,” with a warning that “the cone cannot be soaked (in the juice of the stuffing) for too long.” Again, temperature and timing.

The third appetizer was oven-baked cod fish marinated in soya and kumquat sauce. Kumquat, of course, is a tangerine from China. The cod’s very smooth texture contrasted with its slightly burnt surface.

Next came the delicate-tasting and sweet-smelling bonito consommé. Bonito is dried fish made popular in Japanese cuisine. The soup was cooked for eight hours.

Leung’s soup had a black dumpling colored with squid ink and stuffed with seafood and smoked duck. It elicited ecstasy among some foodies. Once bitten, the smokiness invaded the mouth and lingered.

A rose-colored sorbet followed, which Leung described as “fun and playful.” The chef personally sprinkled “sparkling candy” on it, which made it look like ground pistachio that crackled and jumped when it touched the icy sorbet.

A reporter asked whether we were being served sorbet with Pop Rocks, the retro candy that pops inside the mouth. “Similar,” Leung answered with a smile. “It’s sparkling candy made of sugar.” In short, a palate cleanser.

After a few moments, he announced: “Now the real food is coming.”

But first, a pleasant surprise. Not on the menu was lobster tinged with spice, ginger and XO sauce. It came with a “golden broth” that Leung said originated from Central China.

It came with homemade noodles from Shanxi, a region in China popular for inventing “thousands of varieties of noodles.”

Lifestyle food columnist Sandy Daza noted that the slow-cooked short ribs melted inside the mouth. Many were intrigued by the crispy Tian Xing grains on top. Leung said Yunnan farmers produce less than 2,000 kilos a year and he has cornered most of the supply for 2017.

As if on cue came the dessert—a wide plate that had a passion fruit buchi fashioned into a mangosteen; a yam paste pastry “pretending to be a green apple;” and a black, coconut-flavor glutinous rice ice cream bathed in black sesame sauce. The mangosteen was crunchy and produced a sweet and sour explosion inside the mouth.

Leung summed up the China Blue adventure as “taking inspiration from traditional recipes by working with masters of Chinese regional cuisines, staying true to traditional Chinese cooking techniques while pushing the envelope in style and presentation.”

While food presentation is “very important, there must be balance. It’s not only about being pretty. The food must taste good,” he said.