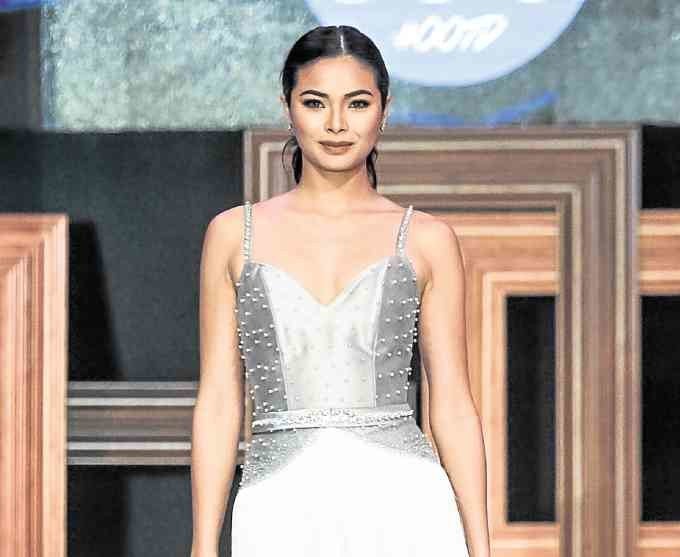 The country’s 2016 Miss Universe bet drew wows and cheers from guests and mallgoers alike in “Face-off: #OOTD”  held March 2, when she walked the finale in a gunmetal version of the Rhett Eala fringed emerald number she wore to the beauty tilt in January.

With every graceful step, the tiered fringes swayed; with her every glide, they swished ever so gently.

Eala’s evening wear was just one of the oddities in a fashion event that called for looks incorporating the iconic Chuck Taylors of Converse, the event’s copresenter. But audiences didn’t seem to mind; Medina was the darling of the moment, and she owned it.

(By the way, the look was also a preview of Eala’s fashion show later this month, where he will present all the dresses he designed for Medina for Miss U, some of which haven’t been seen onstage.)

“Face-Off” is the annual banner event of Inquirer Lifestyle and LOOKbook, and “#OOTD” is a concept that digressed from the usually more structured show. (Unless you’ve been living under a rock, you’d know that OOTD stands for “outfit of the day.”)

But the beauty of a concept like that of “Face-off: #OOTD” was that it allowed for that element of surprise. It was a chance for the designer to, perhaps, inspire and delight—and get as many likes—by celebrating his/her individual aesthetic, while also embracing the sneaker trend.

Held at the East Atrium of Shangri-La Plaza Mall, the show featured the fashion designers—32 in all, from industry veterans to millennials—and they didn’t disappoint. It was a wild crop of OOTDs, from streetwear to party frocks, as well as looks that wouldn’t have been out of place on the Miss Universe stage.

It was a career highlight for the millennials, some fresh out of fashion design school, as they were put on equal footing onstage with some of the country’s most seasoned designers. Surely it was a triumph to share the stage with eminent names like Albert Andrada, Cary Santiago, Randy Ortiz, Rajo Laurel, JC Buendia, Jun Escario and Eala.

But #OOTD is a concept born of the millennial’s era, so they had that going for them. These youngsters live and breathe OOTD. The intent of “Face-off,” now on its eighth straight year, is to put designers together on the same stage, in a sort of creative duel.

For the surprises: some of the senior designers went out of their comfort zones and took on the sneaker route. Mike de la Rosa, who makes dressy looks for SM, sent out two young women in white playsuits, both shod in Chuck Taylors.

They wore copresenter Fossil watches on their wrists. They might not have worn the Chucks, but carried them as accessories.

In an OOTD, after all, there are no rules.