Where you started, where you will end | Inquirer Lifestyle ❮ ❯ 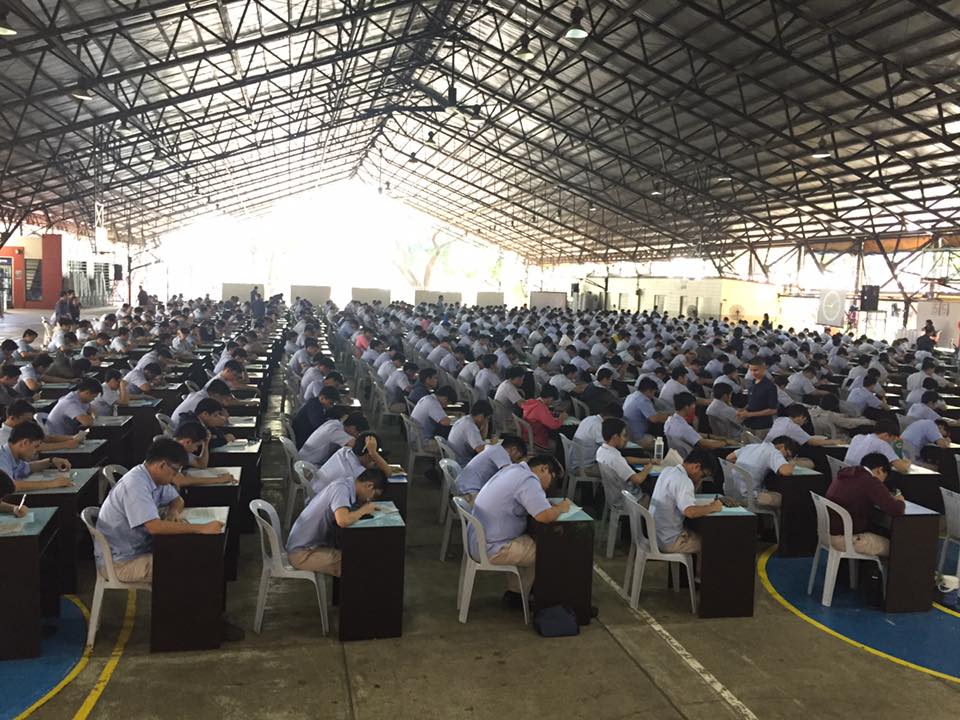 Where you started, where you will end

At the Ateneo High School there’s a saying that goes, “You will finish where you started.”

For grade 6 or 7 students aspiring to continue studies at the Loyola Heights campus, this means taking the high school entrance exam at the covered courts.

High school seniors take their final exams in the same venue. However, with the implementation of the K-12 program in the country, which prompted Ateneo to open its doors to female enrollees for the first time in 157 years, an old tradition will soon fade.

As Ateneo prepares to close a chapter in its history, a few alumni reminisce about the time when they were the ones sitting in those Monobloc chairs taking their last exams in high school.

The last of its kind

“This batch is the last of its kind, the last to graduate from a school system that spanned generations, producing some of the finest men this country has seen. As we end an era, we celebrate tradition and what was, because that’s where we will get our inspiration for shaping our future schools. One big fight, batch 2017!” –Sansan Mallillin Borja

“I never realized that taking your finals at the covered courts was the end, not until I saw the pictures of the seniors online. While I wished that it would end quickly so that exams would be over, I also realized that this signified the end of one of the best parts of my life.” —Franklin Ramos, 4M 2011, medical student

“The thing that always struck me while taking my final exams at the covered courts was that I was going to college. I was certain that I would graduate, but at the same time I was relieved that high school was over. Coming full circle, leaving the school the same way that we entered, felt fulfilling. It was more than just an exam, it was a rite of passage.” —Pancho Badiola, 4F 2011, medical student

“Back then, taking the test was a run-of-the-mill thing. Somehow, I thought that it was unusual that we would use the covered courts for the final examinations and not the classrooms. It was years later that I realized that those last examinations in the same venue were the culmination of our sojourn here in high school. These covered courts were the same site where we took our entrance exam. This is a symbolic episode of our entering the high school and leaving in the same way. Hence, I could not believe that taking such a test, which I considered an ordinary event, was in fact an extraordinary one with a lasting imprint.” —Barry Kayanan, 4G 2010, Ateneo de Manila Junior High School department

“That was a do-or-die exam. Pass, and you move on to college; fail, and you repeat fourth year all over again. Of course I wanted to pass, but then again, that last exam was nostalgic for me. It meant that all those times with classmates—the class nights, the times we went to the cafeteria during our five-minute breaks—would be nothing more than memories.” —Mikee de la Rosa, 4D 2009, medical student

“I felt it was the end of an era, a passing of the torch. Like the departure of the elves from the world of man, it’s a feeling that one must pass to the next phase. It is melancholic, to say the least.” —Leandro Nadal, 4E 2008, law student

“I felt that it was a sign of my impending freedom, that I finished something worthwhile. It was a feeling of achieving something in life. There was a sense of pride in belonging to a special group of gentlemen, and gratitude that I survived.” —Zomesh Maini, 4I 2002, Ateneo de Manila University Department of Biology

“I honestly cannot remember since it was almost 20 years ago, but I think I just focused on the task at hand and did not let the vastness of the space intimidate me. I am generally calm when taking exams, and I did not treat it much differently from a major exam. I am pretty sure there was also excitement, and a sense of solidarity since the whole batch was taking the exam at the same place and time. It was the time when the exam results for the University of the Philippines College Admission Test (Upcat) came out, so for some of us, it was just a formality.” —Ronald Cruz, 4J 1998, Ateneo de Manila University Department of Biology

It was a formality for me as well, since I was sure to graduate and move up to the Loyola Schools for college. Of course, I also couldn’t help but look back at the four years I spent in high school. It was a collection of good and bad memories with classmates I still treat as my brothers. I believe that’s what makes it so special.

To the last all-boys batch of of Ateneo de Manila High School, to the Class of 2017, congratulations! May you be successful in whatever field you pursue. Go down the hill with Christ at the center, with competence, conscience and compassionate commitment. One big fight! —CONTRIBUTED