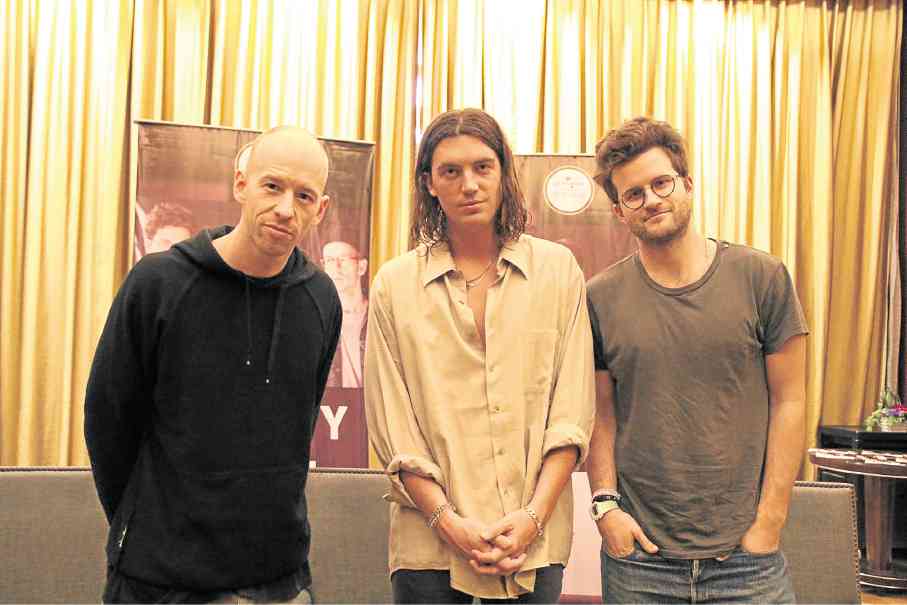 The boys of LANY could scarcely believe it when told how psyched people were for their first Manila visit, even as they shared how several fans had greeted them at the airport and at their hotel.

The American indie pop band—composed of Paul Klein, Les Priest and Jake Goss—had recently been in town for the fifth installment of the annual Wanderland Music and Arts Festival, held at the Filinvest City Event Grounds last March 4.

“We don’t really know how many fans we have, so we’re excited to kind of go out and play and see what it’s really like, how they react,” Paul told Super hours before their first live performance in the country.

Based on the overwhelming response that night, we’re pretty sure both band and audience did not disappoint.

Pronounced “lay-nee,” the band’s name stands for its members’ favorite US cities: Los Angeles and New York. The trio started out in 2014, making music on a laptop in a small apartment in Hollywood. They put up a couple of tracks on SoundCloud and were contacted by music industry peeps soon after, leading to numerous support tours and festival stints as well as their own headlining shows.

“Spotify and the digital age is really all that we know so we’ve really embraced it,” said Paul of their massive exposure via streaming apps. “We understand that most people will discover us and listen to us that way.”

LANY is literally the greatest Spotify discovery yet—as the app’s most streamed artist, the band has racked up millions of listeners and combined streams via the Discover feature. The sweet love ditty “ILYSB” (short for “I love you so bad”) has earned the distinction of being the most streamed track on the app’s Discover Weekly playlist.

For every cute love song, there’s a cute backstory to go with it, and “ILYSB” is no exception. “I liked this girl, and it was the first time we were riding in a car together and we were riding back from Santa Monica to Hollywood,” recalled Paul. “She was on the phone with her sister and she said, ‘I love you so bad.’ I heard that and I was like, ‘That is the most amazing thing that I’ve ever heard. I wanna write a song called ‘I love you so bad.’

“For a while, we would just keep talking and we would say how our hearts beat for each other. She wrote it on a notepad and put it in my car. It’s still in my car, actually,” Paul admitted. “So, yeah, it was a couple of months after hearing that when I wrote ‘ILYSB.’”

As huge as the original version is, “ILYSB (Stripped)” seems to have become almost as, if not equally, popular, so much so that the guys decided to put it out as a separate single. “We would sing it in the apartment together—we practiced ‘ILYSB’ stripped and it sounded pretty cool. And then we played it on Snapchat (live performance) and that went on everyone’s phones, I think, for a day or so. There was just such a massive reaction to it,” said Paul.

Arguably, LANY’s music is the kind of synth-laced retropop that instantly resonates with the young hipster crowd—with acronyms and smallcaps for song titles, how much more “millennial” can you get—but it’s also the kind that tugs at your heartstrings and lingers in your brain until you find yourself hitting the replay button over and over again.

They currently have two EPs, “I Loved You.” and “Make Out,” which fans consider as an apt description of the band’s music—earnest, straightforward and wholly likable, and made for serious cuddling.

Knowing that, have they ever caught any public displays of affection while performing? “Actually, yeah, we’ve seen people make out,” said Jake with a grin. “They were doing the video for ‘4EVER!’ and Mel, our photographer, would say people at the back would just be kissing to the song. And that’s awesome,” Paul shared.

Fans eagerly await the band’s first full-length album, which drops June 30. If the dance pop single “Good Girls” is any indication, the album promises more of the same ear-candy tunes that put LANY on people’s playlists.

Apart from headlining their own tours, the band will be opening for John Mayer for his North America shows next month. And to think that not too long ago, they had invited the “Love on the Weekend” singer to one of their shows but were bummed when he didn’t show up.

“It feels so cool. I mean, it hasn’t really hit us. I think it won’t hit us until we walk into that first arena where he’s there,” said Paul, who’s a huge Mayer fan. “We don’t know how it came about, actually. I mean, we knew that we were being considered for it, and I think he might have heard about us from enough different angles that it kind of made sense to bring us out.”

With new music on the horizon and Filipino fans clamoring for more, a second visit and a full-length show—and maybe, with Mayer in tow—may just be the next logical step for LANY. “That would be great!” Paul said. We completely agree.