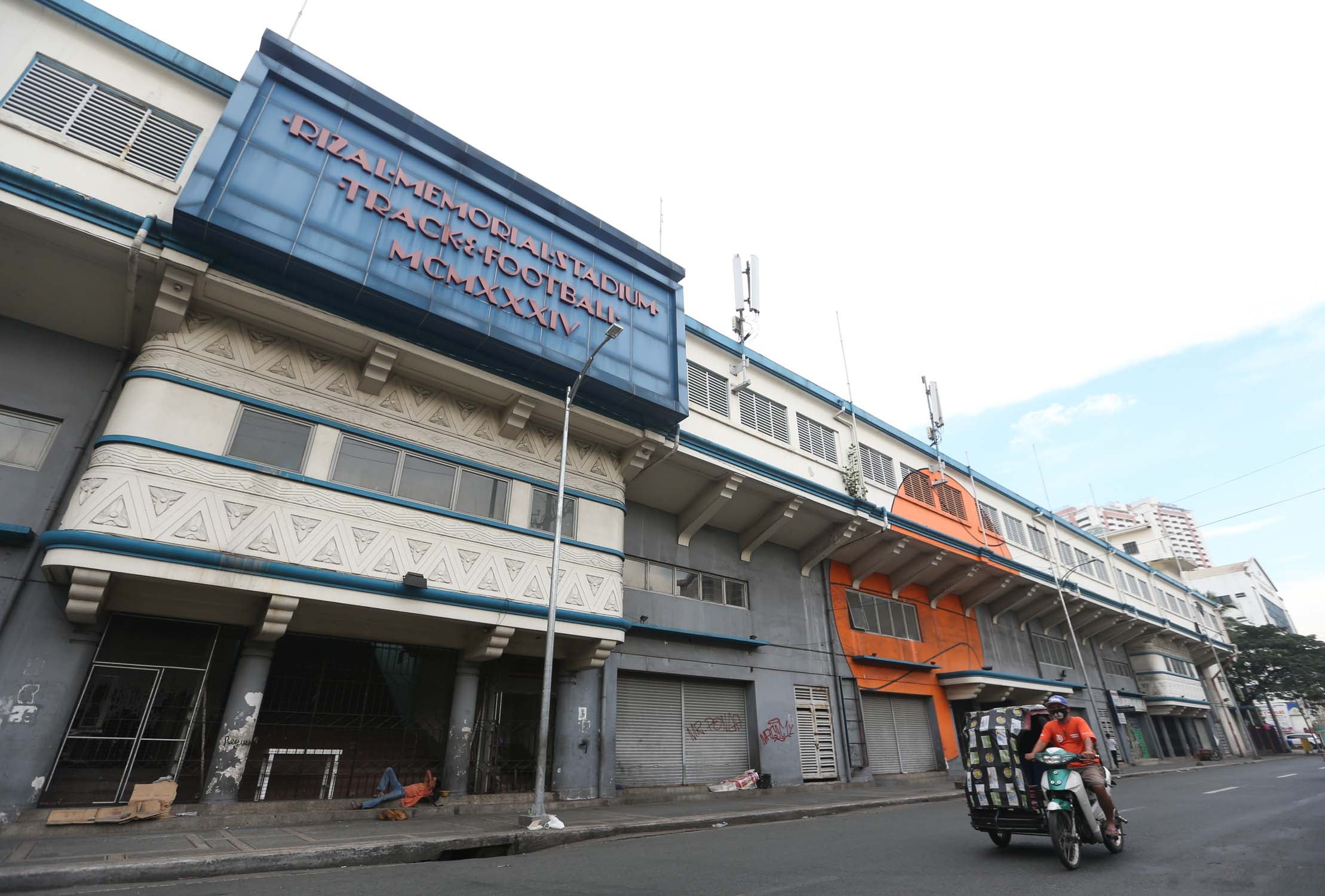 Rizal Memorial Stadium, designed by Juan Arellano, is the biggest art deco complex in Southeast Asia. But it has come to seed in Mayor Joseph Estrada’s Manila. —LYN RILLON

Rizal Memorial is the multipurpose athletic center that has been standing at the corner of Pablo Ocampo (formerly Vito Cruz) and Macario Adriatico (formerly Dakota) Streets in Manila since 1927.

On 9.3 hectares of land donated by the Vito Cruz family during the Commonwealth era, noted architect Juan Arellano designed and built a sports complex which was inaugurated in time for the 10th Far Eastern Championship Games in 1934.

What Rizal Memorial has to offer are the baseball stadium, coliseum for indoor sports such as basketball, and track and football stadium.

Outdoors are eight tennis courts and an Olympic-size swimming pool.

This is the country’s national sports facility, training ground of its serious athletes, and the site of both local and international competitions which range from the 1934 Far Eastern Championship Games to the postwar Asian Games and, much later, the Asean Para Games.

Hall of Famers Lou Gehrig and Babe Ruth graced the baseball facility during the 1934 Far Eastern Championship Games; Babe Ruth hit the first of the two home runs during the games that marked the inaugural of the stadium.

During the Commonwealth era, the vast sports facility doubled as a civic area, Manuel Quezon was named presidential candidate in the 1935 Commonwealth elections.

A favorite site for large public gatherings, it is best remembered by the baby boomer generation as the place where the Beatles performed two concerts, alleged to have gathered the largest paying audience in any of the band’s tours.

Oldest in the region

Its moderne look reflected Philippine prosperity and global outlook during the Commonwealth era, expressed through that period’s romance with the machine age: streamlined building architecture with rounded edges and corners; narrow concrete canopies to fend off tropical sun and rain. Even the jazzy signage lettering was totally in the art deco style in vogue at that time.

Together with the Far Eastern University campus (which received the Unesco Asia-Pacific Cultural Heritage Award in 2005), Rizal Memorial is among Manila’s largest surviving art deco ensembles.

Rizal Memorial Athletic Center is the national sports complex of the Philippines, where the country’s top athletes train, and is the site of generations of local and Asian sports competitions from before and after World War II.

Surprising for such a big city like Manila, Rizal Memorial is the only large-scale sports facility that is open for use by the underprivileged in a city where most sports facilities are sadly in private hands.

The threat of development hovers over historic Rizal Memorial. Reportedly Manila Mayor Joseph Estrada wants the facility demolished and replaced by a mixed-use development. An upgraded sports facility will be built in Clark by the Philippine Sports Commission to replace Rizal Memorial.

The city owns the land, but the Philippine Sports Commission owns the facilities, and sale of the property must be approved by both. However, ownership and sale procedure are being contested, awaiting a Department of Justice ruling.

Former Olympian and now Makati Rep. Monsour del Rosario is among those who have taken up the fight to preserve Rizal Memorial. A formidable group of national athletes as well as colleagues from Congress support his call.

Del Rosario says the Philippine Olympians Association is against tearing down Rizal Memorial.

And something that has been glossed over: What about the residents of Manila? Don’t they have a say on this issue? Don’t they need a venue for sports, for athletic training, or simply need an outlet from the congested city? Shouldn’t they have somewhere to be instead of on the streets?

“Manila residents deserve affordable sports facilities and public open spaces, even as a new national sports complex will be built in Clark. The Rizal Memorial should remain as a sports complex, and should be dedicated to the people of Manila,” says the statement of the Heritage Conservation Society.

In Phnom Penh, the National Stadium is also a public facility mainly for hosting national competitions. The difference is that the local population crowds the stadium daily at dawn and late afternoon to jog, do calisthenics, participate in Zumba sessions, or just to stroll.

Conceived as a stadium, its function as a community gathering point was an unplanned but totally welcome bonus. Couldn’t more of the Manila public be invited to enjoy Rizal Memorial?

What will happen to Rizal Memorial?

Transparency is needed. Everyone should know what is afoot, in the same way that everyone should be consulted on what can be done with the property.

Standard procedure in conservation practice is the preparation of a Heritage Management Plan, a study that looks at the historicity of the heritage, what it means to the community and to the nation, and, among other things, its impact on history, whether it should remain in toto or which parts of it can be altered and developed. This is done to guide the redevelopment process.

Redevelopment plans should also be shown to the stakeholders—the community that uses the facility, and to the general public—to get their opinion and input on the proposed changes.

Although an added step in the process, community consultation is essential to decision-making. It is, after all, the democratic way.