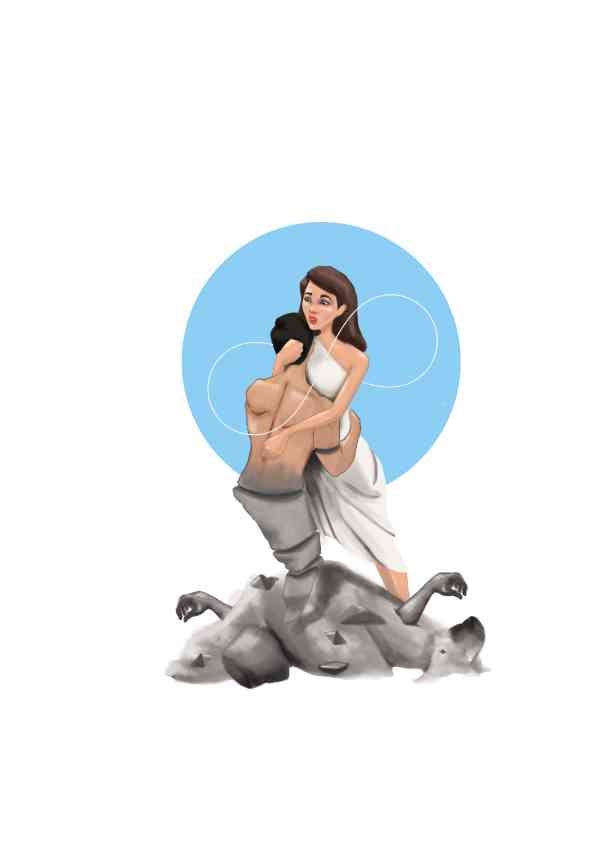 Criselda finds Mateo for the fifth time, 40 years after the death of the fourth.

He is young, 21, with bright eyes and tattooed skin when he enters the museum that she works in. His hair is combed back and he wears jeans that are too tight for his legs. His laugh is too loud and his face is clean-shaven.

This Mateo is named Manuel.

“I feel like I’ve seen you before.” He teases, uses the generic line to get her attention and fish a smile.

Criselda has heard this line for far too many times to count, from books, to televisions, to movies—and shouldn’t those writers have come up with a new one already?

But, it still breaks her aged heart to hear it from the man wearing her beloved’s skin.

She does not look for any sign of recognition in his eyes— she’d learn from the first time—instead, Criselda smiles, turns and leads him around the museum. She tries to believe that he’s nothing but a stranger wearing a familiar face.

The next day, he asks her out on a date.

Criselda counts the differences this Mateo (Manuel) had from her the past Mateo(s).

When he holds her hand, Criselda knows; this Mateo does not know how to toil the land, has not known the humiliation for being called indio or estupido by a man who took his ancestor’s land. His hand is too soft and his skin is too pale to know the weight of the noon sun against his back, or the feel of bolo in his grip.

When he pushes a plate of unfinished food away, Criselda knows; this Mateo does not know the pain of going hungry. Has never known what it’s like to beg for stale bread, to hide underground for days, praying that the soldiers with too pale skin and straw colored hair will go away.

When he laughs, Criselda knows; this Mateo does not know feeling of betrayal from his own people. Has not lost his brother to men exercising discipline, has not lost his mother to men preaching nationalism (idolatry). His laugh is too light, too easily given to be mistaken for something other than the result of happiness.

And when he kisses her, Criselda knows; this Mateo has never had his heart broken.

(And he never will, not this time, she’ll make sure of it.)
He is very different from the past Mateo(s)—but so alike too.

(Because despite the softness of his hands, he knows the weight of placards, holding words that may change the world.

Because despite not finishing his food, the food he pushes away, he pushes it toward the children knocking on glass doors of restaurants.

Because despite his free laugh, he knows when to rage and shout against the injustices in the world.

He fights and lives the way he knows how.)

And so, Criselda falls in love all over again.

(It makes her wonder, how much of her Mateo(s) was Mateo because of the circumstances of the times he was born in. Had her first Mateo lived longer if he lived during the time of skyscrapers and mobile phones? Could he have been kinder? Would he have smiled more? Would he have stayed?)

They marry a year after they met—(And if Manuel notices the times when Criselda’s tongue slips and calls him by another name? He does not show it.)—and she loses him a year after.

“It has always been that soul’s destiny to die young. He’s always had too much fire.”

From the shadows, a form emerges. It cannot be said whether it’s a man or a woman. Although, really, it never really matters because sometimes it is a child, crawling and helpless, and sometimes, it is young woman with sharp smiles and even sharper eyes. It glides across the wooden floor and stands beside Criselda.

This time, Criselda loses him through a man in a motorcycle, two bullets to his head and a placard hanging around his neck, resting on his chest.

“There will be others.”

The entity runs his fingers through Criselda’s hair, twisting and pulling. “I don’t know whether to call you blessed or cursed by the gods.”

Criselda smiles, immortal eyes turned to the window as light from the sinking sun as it paints her skin with orange gold. There is weariness in her youthful face, a resignation in her proud posture.

“Aren’t they the same thing?”