‘We can choose which balls we are going to catch in life’ | Lifestyle.INQ ❮ ❯ 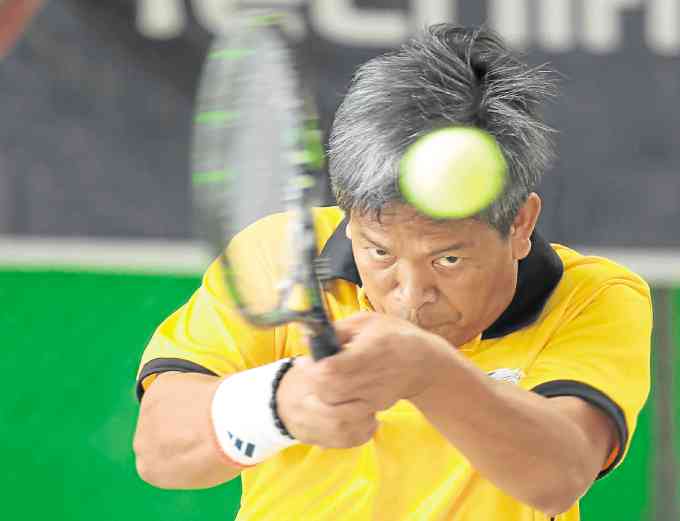 Fr. Fernando Suarez says tennis may be a sport, but it has given him numerous spiritual insights on humility, consistency, non judgment and service.

Fr. Fernando Suarez, better known as the country’s foremost “healing priest,” is a big fan of Spanish professional tennis player Rafael “Rafa” Nadal. And so are many of his priest friends, who would even call him before Nadal played in numerous finals matches to ask Suarez to pray for their sports idol.

Imagine the priests’ frustration that Sunday in January when they all tried to call Suarez to pray for Nadal as he slugged it out with Roger Federer in the Australian Open finals.

“During that game, for some unknown reason, na-low batt ako! Hay naku, natalo,” he recalled.

Suarez let out a loud guffaw, adding that an elderly priest who also rooted for Nadal turned off the TV in his rectory rather than watch in agony.

With San Miguel Corp. as major sponsor, those who played best among the 250 priests were assured of participation in the annual tennis competition for priests to be held in Krakow, Poland, later this year.

Suarez himself coined the tournament’s slogan—“Born To Serve.”

The priest, who turned 50 on the first day of the tournament, said he once struggled with his serves inside the court, eventually asking a friend who is a professional player to observe him while he played. “Just bend your knees, father,” the player said.

“When you bend your knees when you serve, you generate more power. I learned it that day,” Suarez noted. The priest said this episode provided him with an insight—bent knees, more power, service.

“Oh my God, ang galing! Ang ganda! You have no idea, I can go on and on about my reflections that put spirituality in the sport. When you bend your knees, you become humble. I needed to ask God to aid me in serving, and I improved my service and my game,” he explained.

Later on, more epiphanies came as Suarez got more and more involved in the sport.

And another about so-called bad balls. “That’s the term we use for balls na malalakas nga ang tira pero out naman. From this I learned that we can choose which balls we are going to catch in life. Lahat ng masasamang sinasabi ng tao sa atin, leave them. Those balls are out. You don’t need to catch them. And it won’t hurt you because it’s a point against the one who hit the ball, not you,” Suarez added.

Recognizing a bad ball traveling toward you at a high speed is tricky. “That’s why you need a good eye. That’s good judgment that only comes from experience,” he pointed out.

Also, a lesson comes while developing consistency in one’s game.

“Consistency is not a given, you need to practice. In life, your mistakes are a given. We need to work for consistency to avoid them, to eliminate errors, just like in tennis,” he said.

Suarez said consistency, whether in or out of the court, can be considered a sign of maturity.

“A mature and spiritual person can be gauged by his consistency. A spiritually mature person is consistent in what he is saying, in his action and practice. If you are consistent in life, you win in life,” the priest explained.

Now Suarez would be the first to admit that priests, like everyone else who plays tennis, would also let out their annoyance when their game goes bad.

Chris Cuarto, a national coach for tennis, has been part of the organizing committee since the first tournament. He noted that some priests would even “get feisty with the line calls.”

“I would shout ‘Sh-t!’” Suarez admits. “We’re also human beings and it’s good that others know that. But tennis builds rapport among the priests. I am glad that this group has grown bigger and bigger. We started with only 30 who met to play after the National Congress of the Clergy in 2010. And now we have 200 to 250 priests.”

Participants agreed that tennis helps relieve the tensions that come with their religious responsibilities.

“Tennis is a good outlet after praying and saying Mass. Besides, I get sick when I don’t exercise,” said the Ottawa-based Fr. Jeff Shannon, MMMP, currently based in Mindoro Occidental.

Fr. Joseph Larida and Monsignor Ruben Labajo of the Diocese of Cebu both observed that tennis does not cause serious injuries like in basketball.

Visiting Greek Catholic priest Fr. Igor Suchÿ from Slovakia said tennis keeps one in top physical and mental condition, which is a requirement for religious service.

Suarez talked of one priest who joined one of the earlier tournaments and approached him after the games. “He was depressed and was supposed to enter rehab for some renewal program, but his plan did not push through. Nagpasalamat dahil sa tennis,” Suarez said.