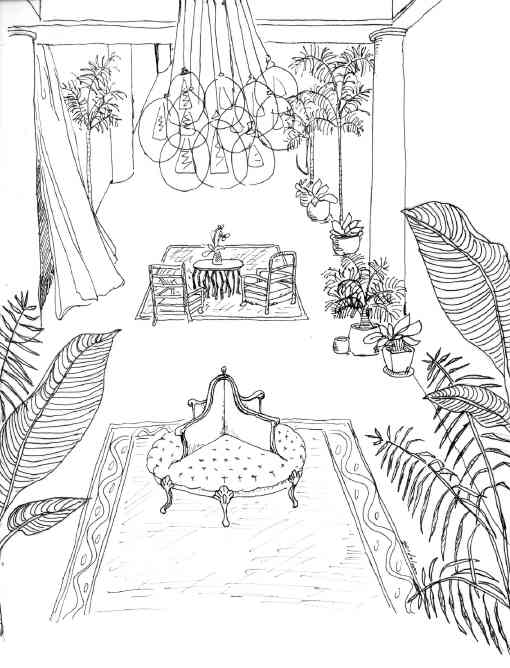 Since photos aren’t allowed, illustration should do— the entrance hall ofManila House

“The bourgeoisie is just as necessary a precondition for the socialist revolution as the proletariat itself,” wrote Marx. “I refuse to be a member of any club that would have me as a member.”

The first quote is by Karl, the second is by Groucho, almost a century later. Whether one or both of these statements applies in this instance depends on your take on the culture of exclusivity in general, and on exclusive clubs in particular.

There’s nothing more that will make people need to be part of something than by excluding them from it. Which is why many are raring to gain entry into Manila House, a by-invitation-only city club whose members are chosen on the basis of being “an assemblage of people who gather together, drawn by shared interests and a longing to continuously learn about art, culture, food, business and politics,” according to its website. Although since it’s by invitation only, “gathered” is perhaps more apt.

The club has been much in the news lately, not just because of its barriers to entry, but also due to its controversial policy of not allowing social media posts.

“It is because the interiors are so hideous!” crowed one matrona, who hadn’t been there herself. “They are trying to hide it from the cameras!” My editor has already written up her thoughts on this rule, as well as the lack of prominent signage explicitly forbidding it.

I actually found the interiors, which can be described as heavily garlanded tropical colonial, heavy on the palm fronds, pleasant enough. But I have a personal fondness for the rococo which others may not like.

The art is, well, interesting. There’s a series of Neal Oshima’s prints leaning against the floor in one room. I wasn’t sure if this was a decorating conceit or if the carpenter had forgotten to install the hooks.

There are lots of nooks and crannies, which is nice and cozy, but also leaves me a bit paranoid because one could be having an extended gossip about someone who turns out to be lurking just behind a curtain divider.

There are, I understand, three dining outlets, or at least there will be. I will not be reviewing any of them, because I firmly believe that an essential component of a restaurant is its democratic nature: It should be open to everyone who walks in and has the capacity to pay.

This is built into the very origins of the restaurant as we know it today, which in post-revolutionary France no longer served their previous aristocratic (now headless) masters, but the bourgeoisie. This dialogue with a paying clientele was essential in the creation of classical French cuisine.

In contrast, Britain, which did not have a revolution, never got the chance to develop its cooking from palace banqueting into meals that were centered on the individual.

A restaurant that is behind a membership payroll is, therefore, not a restaurant but merely a dining outlet. It might be a very good one, indeed, but it does not have the element of openness and accessibility that constitutes a restaurant.

That said, I enjoyed the food at Manila House.
I am similarly ambivalent about its membership criteria. In most clubs in the Philippines, people buy their way in by purchasing shares, and their membership is then vetted by committee. Manila House is exceptional in that the honor of paying, as I understand it, about P150,000 joining fee, is by invitation only, at the discretion of the club.

Of the 2,000 memberships it is bestowing—or soliciting, depending on your point of view—over a quarter has already been given out.

Oddly enough, Soho House, which is the chain of clubs that I feel Manila House comes closest to in spirit, or perhaps it aspires to come closest to, does allow direct application, though with two references. Even at the most exclusive of gentlemen’s clubs in St. James, membership is instigated by fellow members.

I am even less knowledgeable about how membership works with the Illuminati or Eyes Wide Shut orgiastic societies. Do you have to be invited by a existing member, and if your initiation goes badly, does it reflect poorly on him?

At the same time, there’s always a need for more places for people to meet in Manila which aren’t bars or clubs (the sort where you dance and drink); and the sports clubs have always catered to the “hearties” while leaving the “arties” short shrift.

It is a promising enterprise, but its exclusivity—the very thing that is drawing people to that discreet entrance beside Passion by Gérard Dubois at Net Park Building, like moths to a flame—might work to its disadvantage in Manila, a small town where people have big egos.

Exclusivity, by definition, means excluding people: accepting some of them while keeping undesirables out. Having taken out a 10-year lease, Manila House is evidently in it for the long haul, but will have to channel the initial thrill of privacy and demarcation into something that functions as an establishment and serves a social purpose.

Keeping other people out is, only briefly, incentive enough to keep people in. Marx, both Karl and Groucho, would probably agree. —CONTRIBUTED