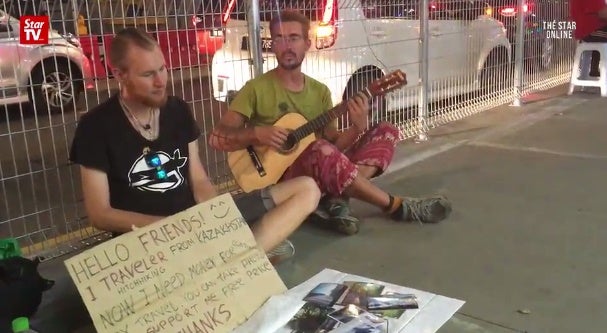 Foreign backpackers hit the streets of KL for money

PETALING JAYA–What do you do when you run low on money while travelling? A new wave of foreign tourists is hitting the streets of Kuala Lumpur to make a quick buck.

Among them, two were selling caricature drawings, one was peddling aerosol spray paintings, two were busking, and one was seen panhandling.

Several of them had cardboard signs explaining that they were travellers and needed monetary help to continue their travels.

“Hello! I’m traveller (sic) from Russia. I traveled 4th month in Asia. Now I must quickly go home! Buy my hand-made picture and you will help me go home,” read one sign.

The sign belonged to 26-year-old Russian traveller Kiril Goncharov who discovered a love for aerosol spray painting during his around-the-world adventure that started in Kazakhstan.

Before he started travelling, Goncharov worked odd jobs ranging from construction to marketing in Russia.

He left his job to see the world and now peddles his paintings to sustain that.

“I like Malaysia and I came to this country to see some places, but of course to travel, you need money. You could save money if you hitchhike but you’ll need money for food and for hostels. To get money, you need to work. My work is to create and sell hand-made pictures,” said the Russian, who had been in Malaysia for three weeks.

Spending five to six hours a day peddling, Goncharov moves between different locations in Kuala Lumpur throughout the day to catch the different rush hour crowds.

“I do this everyday cause I need to buy lots of tickets,” the backpacker said.

Although he has managed to sell about 100 paintings since starting this makeshift business three months ago, his earnings are inconsistent.

The most Goncharov has made in a day is RM235, but he often goes home with nothing at all.

“Today, six people bought from me! Not bad business,” he chuckled.

Sitting next to Goncharov on Jalan Bukit Bintang were two other backpackers whom Goncharov describes as friends he met on the road.

While Goncharov spray-painted, the two men played guitar and sang songs in their native tongue.

Just like Goncharov, Kazakhstani Dmity Pirs, 27, and Russian Aleksei Isichenko, 26, also relied on the generosity of locals to continue their backpacking lifestyle.

The two hitchhikers have been travelling between three to five months, and their funds are quickly depleting.

“Because we finish our money!” they said laughing when asked why were they busking.

Pirs owned a small business when he was in Kazakhstan but closed it down to embark on his long-term adventure. Isichenko, on the other hand, was a hiking guide in the national parks of Russia.

Busking is not just a way to make money but also allows them to feel the energy of the city and meet locals.

Playing only two to three hours a day, Pirs said the most money he has collected in a day of busking in Kuala Lumpur is RM100, but today, he only made RM1.

To show his appreciation, Pirs gave printed pictures of scenes he photographed during his trip to his supporters.

Isichenko revealed busking has been an effective way for him to see a country.

“I played guitar in Hanoi, and I collected enough money to buy a motorbike with my girlfriend. We biked across Vietnam and Laos, it was great!” he exclaimed.

Crowd-funding platforms like Go Fund Me are often used by budget travellers to raise money for their “trip of a lifetime”.

Work and travel programmes and WWOOFing (volunteering on organic farms in exchange for food and accommodation) are also popular options to travel on a shoestring, but now peddling, busking, and panhandling are slowing becoming a trend.

Foreign backpackers have been sighted panhandling in the streets of China and Hong Kong, much to the confusion of locals.

Earlier in March, we spoke to Benjamin Holst, the notorious German traveller with one swollen leg who has set up shop here.

At Jalan Alor, seated amongst the hawker stalls, we encountered a 20-something Russian woman holding a sign asking people to donate to fund her holiday.

The woman, who refused to be named, explained that she had to see a dentist in Kuala Lumpur, an unavoidable decision that incurred a big expense.

“When you travel, you pay for food, hotel, flights and sometimes you run out of money,” she said.

When asked if they will end their trip when their bank balance hits zero, Goncharov, Pirs and Isichenko gave a resounding no.

“Sometimes, you don’t need money to travel. You just need to meet people, good people, and they will help you. What you do need is the time to discover the place and the people,” Pir said.