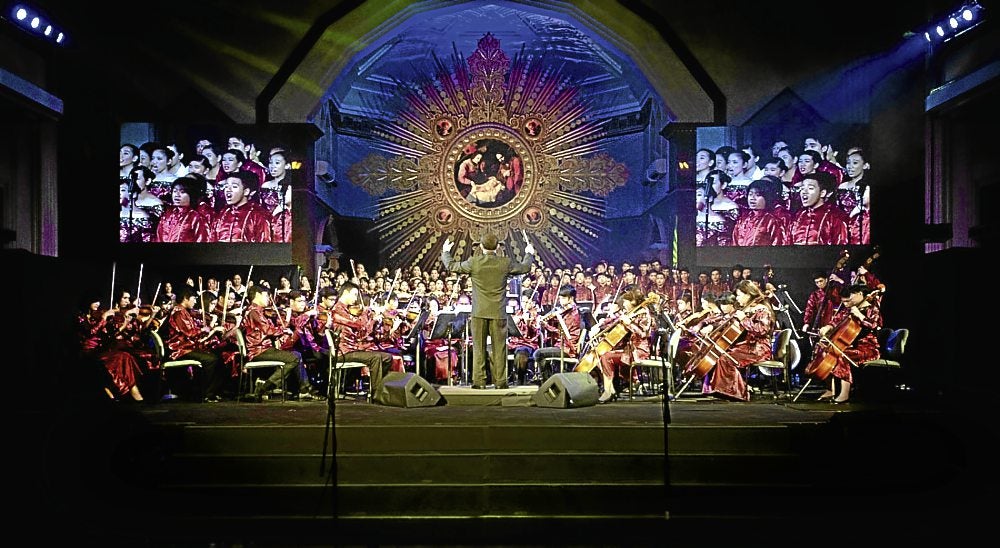 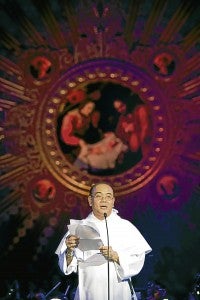 There is a lot to appreciate in the latest edition of the UST Christmas Gala.

For one, the costumes  of the UST orchestra and the assorted choirs—including their competent  soloists—were nothing short of  dazzling, and the  lighting design enhanced that Yuletide atmosphere.

Hermie Ranera’s arrangement of “A Christmas Festive Overture” opened the program with UST Music dean Raul Sunico playing the Martyrs’ Carillon Bells and the Coro Tomasino and the Liturgikon Vocal Ensemble rendering “Joy to the World” and “Angels, We Have Heard on High.”

Having covered Christmas concerts for eternity, one’s  usual fear is, of course, that Christmas music would drown everything.  But the program avoided the overdose of  traditional carols (they remain the main dish though) and showcased  Saturno  and Del Giubileo’s “Salamat Maria” (Gloria a te Cristo Gesu), a tribute to Our Lady of the Rosary, La Naval de Manila, sung with gusto by tenors Lemuel de la Cruz, Ronan Ferrer and Eugene de los Santos

The UST talent to watch is, of course, Harlene Magsino. Performing Rossini’s Air et Choer Inflammatus (from “Stabat Mater”), the soloist with Coro Tomasino and Liturgikon Vocal Ensemble carved a sense of line that allowed her to shine above the parts of the orchestra and choir.  I heard the same vocal promise in  Sim Sung-Hye’s rendition of Caccini’s “Ave Maria.” 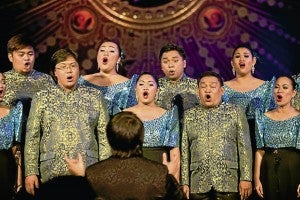 Fr. Manuel Maramba’s arrangement of “Gesu Bambino” for three sopranos (Nenen Espina, Thea Perez-Prosia and Naomi Paz-Sison) was startling, and its delicate moments prevented it from becoming a battle of divas.

We thought the “Rejoice” Medley was way below Rachelle Gerodias’ range but, like the true vocal trooper she is, La Gerodias managed to stamp it with her  pivotal  vocal signature.

O. de la Cruz’s arrangement of “Little Drummer Boy” was a perfect vehicle for the tandem of baritone Andrew Fernando and boy soprano Patrick Packay. The arrangement brought out the special qualities of the two singers, and their duet was ensemble singing at its best. 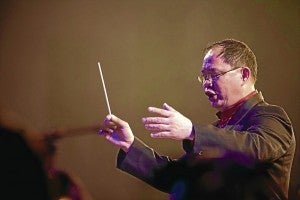 We thought the high point of the evening is the UST Singers’ rendition of Nicholas White’s “O Nata Lux” and two other numbers arranged by Fidel Calalang and Ryan Cayabyab. This choir has the range, the subtlety of sound, and the blending that evoke total choral allure.

For another, the performance evoked total good taste in sound production and it was a good proof of why the choir was second to none.

Last week’s  UST Christmas Gala was the ninth edition. It unfolded as the school was observing its 400th year. The main sponsors this year were the Belo Medical Group and San Miguel Corp.

It started in 2003 primarily to showcase the musical talents of the school, but it has since become a vehicle for   fundraising for  worthy causes, notably for the restoration work of the art collection of the UST Museum of Arts and Sciences and for scholarships of the UST Conservatory of Music.

The fundraising cause is obviously doing well in the hands of co-chair Maricris Zobel, who succeeded in attracting a number of patrons and sponsors.

Zobel  acknowledged the donors thus: “Your unwavering support has been most instrumental in restoring invaluable works of art that are embedded in our country’s rich history and culture.”

Lest the concert be misinterpreted as purely social event,  UST Rector Fr. Rolando V. de la Rosa, OP,  hastened to point out that the concert was not meant to showcase the creme de la creme of high society.

“There is more to the Christmas Gala than moneyed people flocking to the university  with their ultra chic designer gowns paired with elegant designer shoes,” he said. “The reason for the concert resonates with the season. Christmas is the season of giving, sharing and coming together for a worthy cause.”