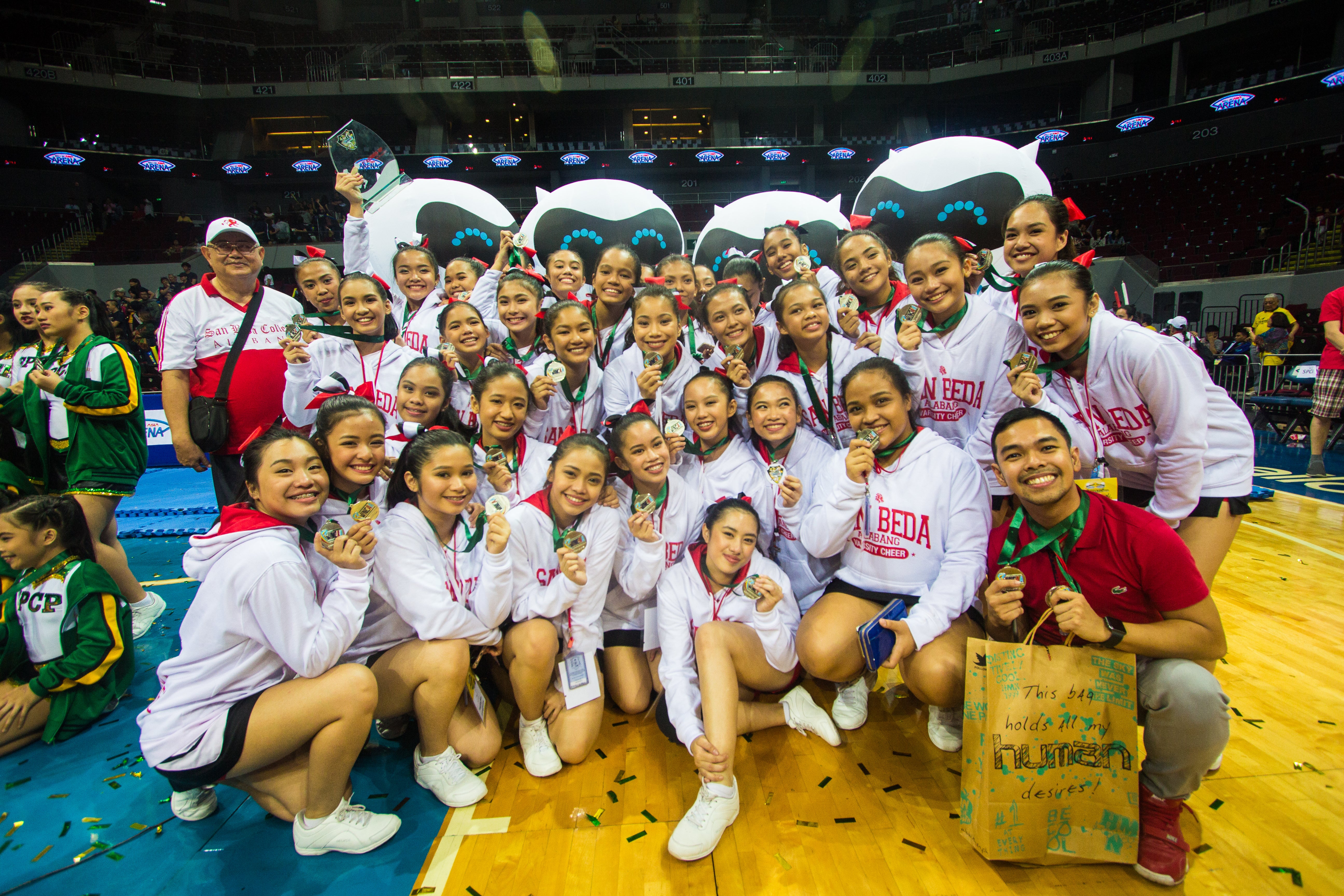 All smiles after being hailed first runners-up —GLETTE-YZAK MURING

‘Just trust each other’

School spirit has always been a big thing at San Beda. Known for its traditional battle chants—some of which date back to the 1920s—especially the “Indian Yell” and its signature Little Indian mascots, San Beda stands out because of its strong cheering culture.

But while the school has maintained its original chants, its cheerleading routine continues to evolve, thanks to the San Beda College Alabang Junior Varsity Squad.

The team started making waves on the cheerleading scene when it landed first place at the Women’s National Collegiate Athletic Association (WNCAA) Cheerleading Competition in 2007.

At a time when themed routines were relatively new to the competition, the team won the crowd and judges over with its Spanish-themed routine.

The team kept its winning streak for three more years, placing gold consistently in the WNCAA until 2010.

As a former member of the San Beda College Alabang Junior Varsity Cheerleading Squad, I felt the pressure as the local cheerleading scene got more competitive. The team had to do more difficult and more advanced stunts.

In 2011, a day before the WNCAA Cheerleading Competition, we were practicing our stunts at the school sports complex when one flyer miscalculated her mount and suffered a bad fall.

She was taken to the hospital and, later that day, we were told that she had dislocated her leg and could not join the team to compete.

Expectations to win were high, so we pushed through with our participation, changing our routine on the day itself and just hoping for the best.

Still, we were all very much affected over what happened to our teammate, and it showed in our performance. After bringing home the championship for four straight years, we ended up placing at the bottom of the heap.

Though the loss was at first difficult to accept, it also motivated us to do better.

After getting appointed as captain a few months after the competition, I helped the team train even harder to prepare for the next WNCAA.

Our preparations worked—
we placed second runner-up in 2012, a great achievement, having come from an unlucky year. But that win also added to the pressure to win again in the coming year.

In 2013, the team joined the Philippine National Games and won bronze in the Team Cheer category. This win meant that it would get the chance to compete in the 7th Cheerleading Asia International Open Championships in Japan.

The team went on to win bronze and silver in the All-Female Group Stunts Category, bringing pride to the school and the country.

Naturally, this meant that expectations went several notches higher, and all eyes were on the team to bring home the gold in the WNCAA Cheerleading Competition.

Despite the hard work, we failed to win the gold.

And it seemed to happen year after year—even as our routines got more difficult, the team couldn’t place higher than fourth, just a few points short of bronze. The team’s glory days seemed so far away, but the team plodded on toward the WNCAA crown.

Everything changed in the Human x WNCAA Cheerleading Competition held last Feb. 25 at the Mall of Asia Arena.

The team, optimistic as ever, was confident, having prepared a year in advance for this event. A large section of the arena was packed with San Beda College Alabang supporters in red, waving red balloons and gamely cheering for the girls even before they could perform.

Their run of the routine was a clean one, a performance met with loud cheers by supporters.

“We wanted to do the best we could and give a performance that our school would be proud of,” said team captain Alex Oropesa.

Competing against cheerleading powerhouses, especially the all-girl schools’ teams, we wondered if we could even crack the Top 3.

After the second runner-up was announced, some of the Bedan fans already felt disheartened. But when the first runner-up was called, the Bedan gallery erupted in loud cheers, and the team members couldn’t contain their tears of joy.

Finally, after four years, the girls brought back the glory to San Beda College Alabang.

It was a moment of pride for the team that never stopped shining a light on San Beda’s strong cheering culture. Perhaps this signals the start of another golden era for the team.

While this victory means the team will have to step up for next year’s competition, there is one thing the girls no longer need to work on—handling high expectations with grace.

“Trust. Just trust each other,” said Oropesa of the team’s secret. “Trust that we will do the best that we can.”