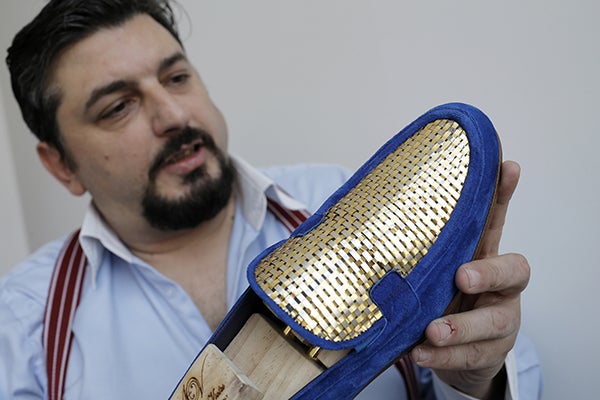 Vietri, from Turin in northern Italy, hopes to attract shoppers from wealthy Gulf countries with his blue or black suede moccasins with stitched gold-plated uppers.

“These are the first shoes in the world in 24-carat gold,” he told AFP. “The particularity of these shoes is that gold is not simply applied, it is not like an accessory or a button. Gold is an integral part of the shoe.”

Small strips of gold are woven by hand and sewn with leather to ensure the moccasin uppers are comfortable.

Vietri is just one of a wave of “made in Italy” producers seeking to tap into the high-end Gulf fashion market, particularly in oil-rich states such as the United Arab Emirates, Saudi Arabia and Qatar.

His men’s gold line was launched in 2016 “after eight months of studies and attempts,” Vietri said. The women’s followed this year.

Each pair of shoes, made with 230 grams of gold, is one-of-a-kind and made to measure using 3D foot scanners.

The price includes delivery by helicopter, and the shoes are presented in a black lacquered box.

Vietri also does a traditional line with prices starting at 250 euros, and another in which shoes feature designs by international artists.

The luxury collection features silk pumps embellished with gold or silver and customers can decorate their chosen model with pearls or diamonds. JB