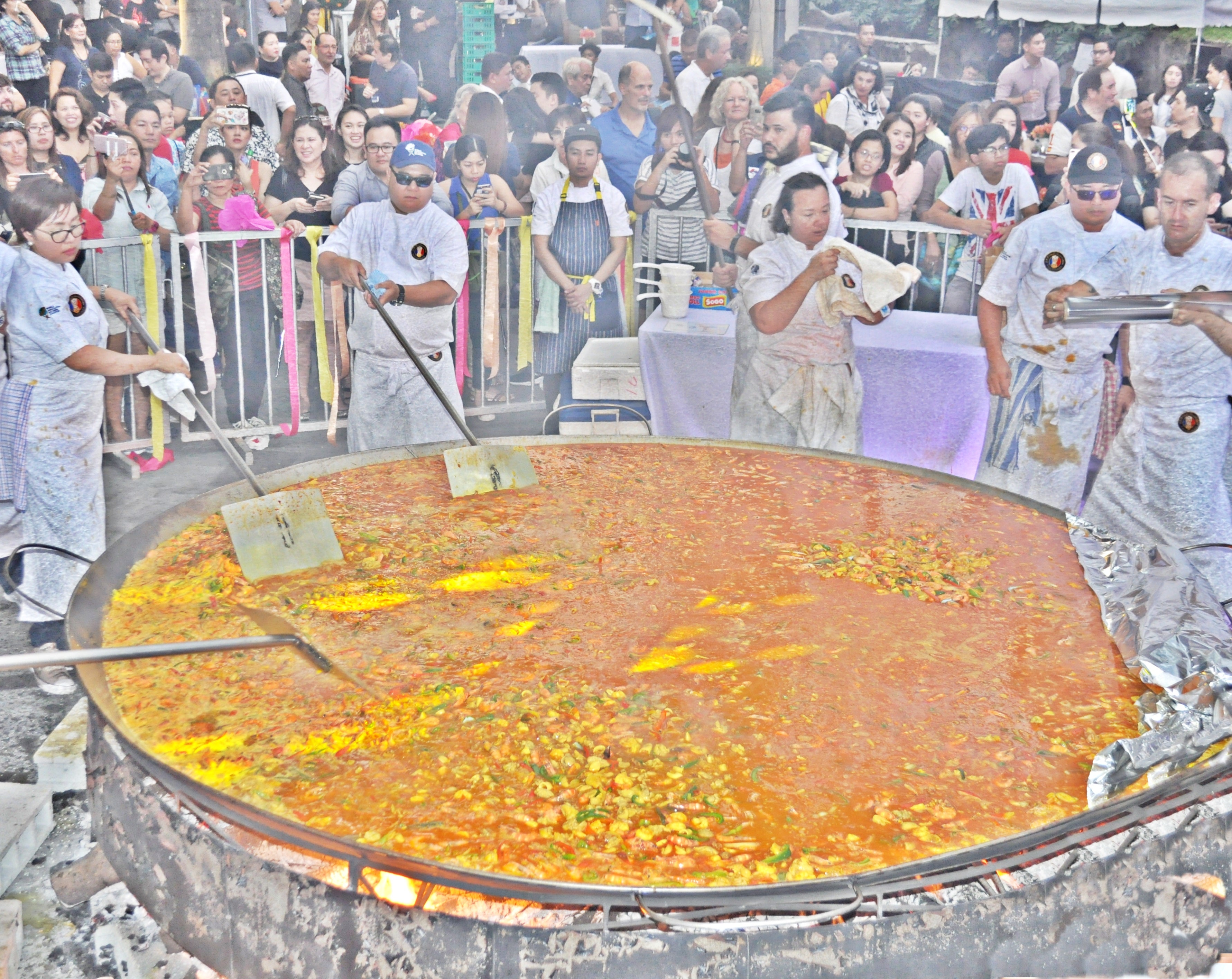 “Paella Gigante,” an 11-foot diameter paella, complete with chorizo, chicken, and seafood cooked in the traditional way: over charcoal and firewood. PHOTO FROM DOT

The Department of Tourism (DOT) has kicked off the Flavors of the Philippines 2017 festival, a month-long culinary bonanza set for April, the Philippine Food Month.

The food festival will showcase the best cuisines of the National Capital Region, Luzon, Visayas, and Mindanao in a gastronomic road trip through various activities like cook-offs, food bazaars, food tasting, and market tours.

Organized by the Tourism Promotions Board (TPB) and DOT, this year’s Flavors of the Philippines marks its third year in promoting different food and local cuisine from different regions across the country.

The festival was kicked off by a “Paella Gigante” held last March 11 in Makati where chefs from Let Toques Blanches (LTB) Philippines cooked an 11-foot diameter paella, complete with chorizo, chicken, and seafood. It was cooked in the traditional way, over charcoal and firewood.

The DOT has listed the gastro events in line with Flavors of the Philippines which will run throughout the month of April.

There will be two simultaneous events until April 30. “Smokey Tour” will take visitors through the market area of Old Manila with merchandise ranging from medicinal herbs, birds and clothing to digital gadgets, open every day except Wednesdays. A cultural exhibit called “Glimpse of Filipino Culture” will be held in Art Gallery Sining Kamalig in Quezon City.

Other events will include “Sabado Mercado” in San Juan City, “All Natural Health Fair” and “Vegan Fair” in Lucky Chinatown, week-end fair “Cheese and Deli Festival” and international cuisine fair “Taste the World at Eastwood City” at Eastwood City.

There will also be a “Culinary Weekend Fair” at SM North Edsa, as well as culinary sessions and food tasting with outstanding chefs called “Food Meets Fun: Chef Creations.”  There will be a “Tapas Night” at Green Sun Hotel in Makati; “Dessert,” an extraordinary confectionaire dégustation at Le Petit Souffle at SM Megamall; and “Flavors of Brunch at Forbes Town” that aims to draw attention to the brunch dishes and pairings on the menu from participating restaurants within Forbes Town in BGC, Taguig.

The Cordillera Region will mount “Flavors of Cordillera” where their local dishes will be fused with mainstream recipes.

The Ilocos Region will host several bangus-related activities like “Bangus Rodeo” and “The Search for Ms. Tisang Bangus’” in Dagupan, Pangasinan.

A gigantic celebration is set for Central Luzon with two of their event highlights: “Giant Bringhe,” a 15-ft diameter variation of famous Arroz Valenciana prepared by four of their best chefs, and “Giant Bucket of Chicharon,” featuring Galan’s chicharon. There will also be food and gourmet fairs, cook-off challenges and food truck fest with concerts and shows hosted by different parts of the region.

Aside from food fairs and buffet, the Bicol Region will have a one-day event called “Kinalas Y Kinolor,” where they will expose the art and culinary preparation of ‘kinalas’ mami, a uniquely Naguena dish that makes use of bowls.

Central Visayas, along with their celebration of Kadaugan Festival, will highlight their own Cebu-grown restaurants through “Flavors of Mactan” and “Sugbo Flavors,” featuring a Cebuano chef and Cebu’s best dishes and delicacies.

For Negros Island Region, it will be all about the sweet favorite mango with their “Mango Festival” to be held at SM Bacolod City.

Zamboanga Peninsula will once again have their “Savores” (chavacano term for ‘flavors’) comprised of two activities namely “Savores Expo,” featuring the cooking skills of the local chefs, and “Savores Dine,” highlighting the different specialties of Zamboanga.

Northern Mindanao will have “Humba de Oro Festival,” where different establishments will display their own variations of Humba. Humba de Oro is a stewed pork dish similar to Filipino adobo, only the former is sweet, sour and salty.

To celebrate Davao’s gastronomic treasures, the Davao region will hold “Flavors of Davao” at their SM supermalls.

SOCCSKARGEN will have their “Seslong Festival” at Kule Gono on the way to Lake Holon and “Mahin Festival – 4Gs (Great Glan Gourmet Getaway)” at Glan, Sarangani Province.

Not only will the third Flavors of the Philippines event aim to promote the country’s best cuisines, but it is also set to give a chance for more local and foreign tourists to taste and experience how food is integral to the everyday lives of the Filipinos. EMB/JE