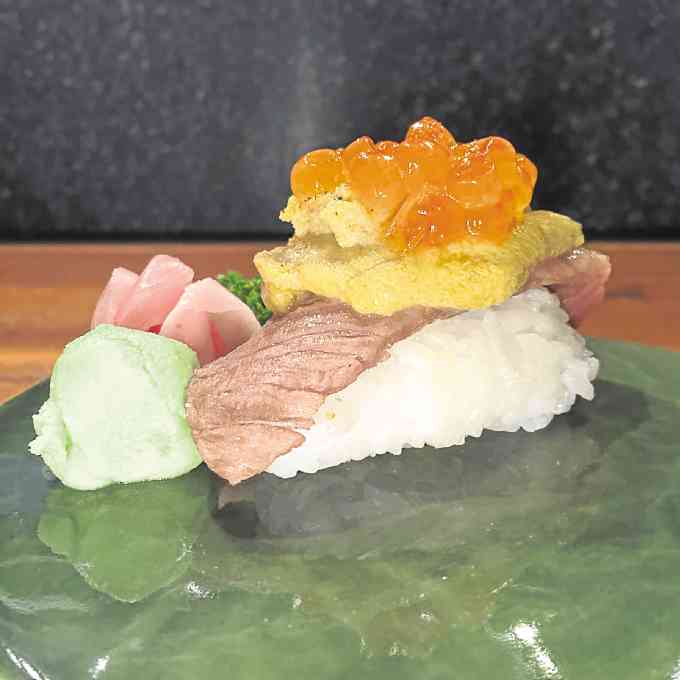 10 new must-try dishes in the metro for March

Manila’s restaurant scene remains vibrant—even in the season of Lent and beach bodies. This month saw the opening of notable dining places, as well as exciting new menus from old players.

Here’s our short list of dishes worth trying. Not to worry, you can still look good in your swimwear after sampling some of them. 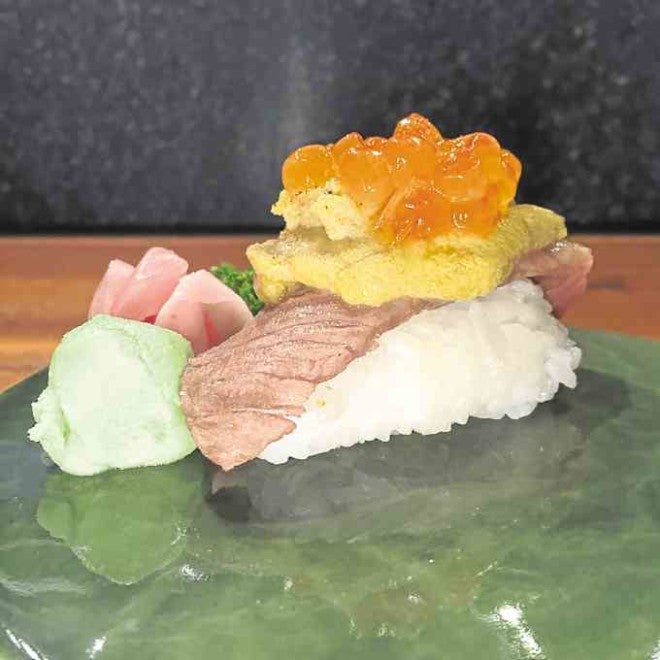 Wagyu Aburi at Marufuku. It is the newest and most indulgent sushi from popular Japanese joint Marufuku. Thinly sliced wagyu is torched and wrapped around sushi rice, then topped with a generous piece of clean-tasting uni from Japan and a small mound of ikura.
It’s savory on its own, but the yuzu paste it comes with adds a tangy spice that just sends it off the charts.

Special Set at Kushikatsu Daruma. It may have taken owner Charles Paw two years to set up and open Osaka restaurant Kushikatsu Daruma in Manila, but it was worth the wait.
We get to binge on what Pinoys love to eat the most—fried food. The varied menu includes chicken meatballs, tonkatsu, Camembert cheese, chicken heart, pork intestine and even mochi. But I highly recommend the special set with Japanese scallops, jalapeño pepper stuffed with cheese, and foie gras getting that delicate embrace from the restaurant’s light and crispy breading. 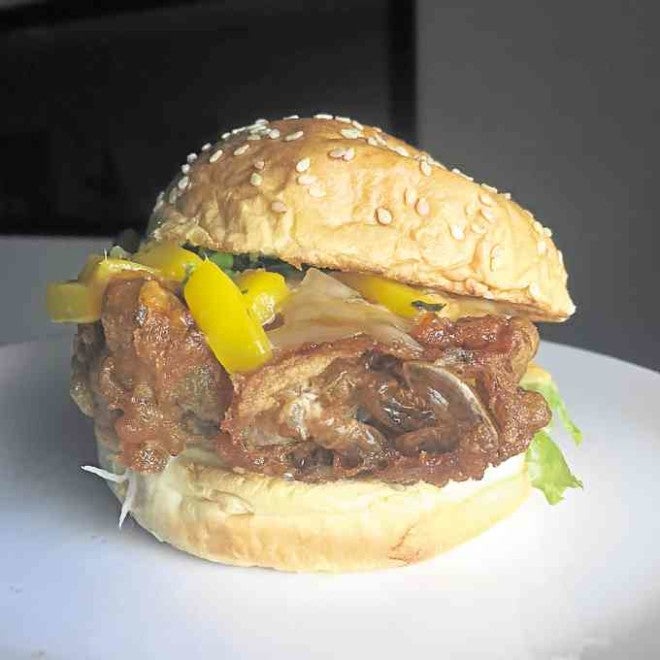 Squeezed in between house-made brioche buns is a deep-fried, beer-battered soft shell crab coated with a trio of sauces—aligue mayo, herb aioli and unagi sauce. It is topped with mango salsa, fresh veggies, mozzarella and crispy salmon skin.

The good news is, a spicy version will be launched. Both sandwiches are available only until end of April.
8Cuts has 11 branches including Greenbelt 2, Rockwell, SM Megamall, and Alabang Town Center. Pizza Spinaci Zola at Cibo. Margarita Forés’ meatless dishes for Cibo include Zucchine Soup and Burrata, and Whitefish with Fennel, Olives and Oranges. “I wanted to add a Pizza Ovale option that would be green, too,” she said. Her son Amado suggested to use the food chain’s best-selling Spinaci Zola. “I imagined its flavor on the pizza and realized ‘why didn’t I think of that sooner?”

The pizza has been getting as much love from regular customers as the classic dip.

Visit www.cibo.ph for a complete list of its store locations. 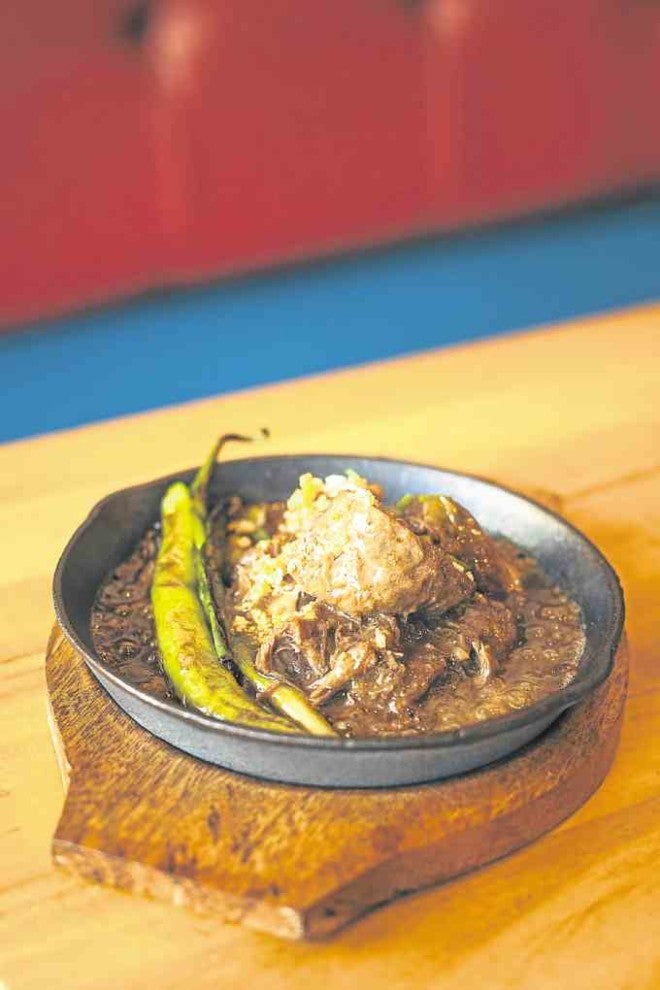 It is then transferred to a sizzling plate with a bubbling sweet and spicy coconut milk-based gravy that’s so rich and flavorful, you’d want to douse your rice with it. It deserves equal billing as Sarsa’s famous Sizzling Kansi. 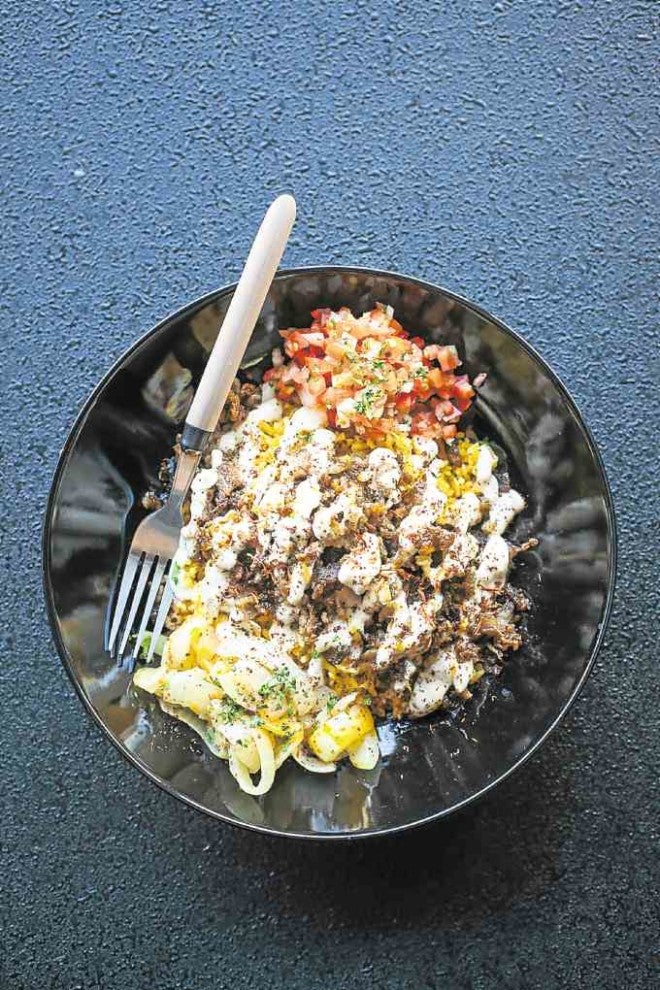 Shawarma Rice at Tipple and Slaw. One of the most underrated restaurants in the metro is Tipple and Slaw. Its Dirty Wings, Grilled Cheeseburger and Roast Beef Benedict, for starters, make a strong case for it.

But the Shawarma Rice is sure to quash any doubt about this resto’s credibility. Buttered curry rice is served with salsa, grilled onions and your choice of grilled Angus beef or peri chicken. It is topped with homemade garlic sauce, sumac and cilantro.

Though simple and uncomplicated, it’s the dish you’ll unexpectedly crave for. 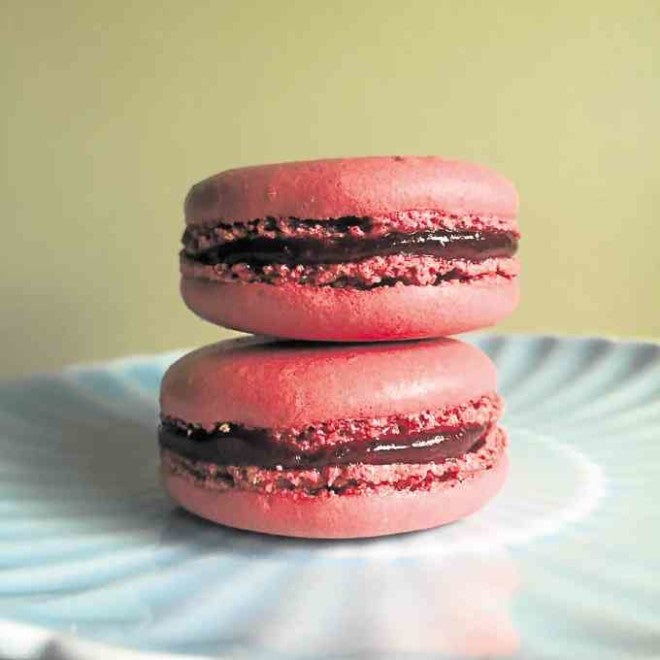 Morello Cherry Macarons at Ladurée. Every so often, Ladurée comes up with a range of seasonal flavors for macaron lovers. Thanks to the ingenuity of chef Claire Heitler, there are three new variants to enjoy—
Chocolate Hazelnut, Chocolate Caramel and Morello Cherry.

The first two satisfy the sweet tooth but are already familiar to regulars. The cherry, which offers a delightful zest, has an edge. Available until May. 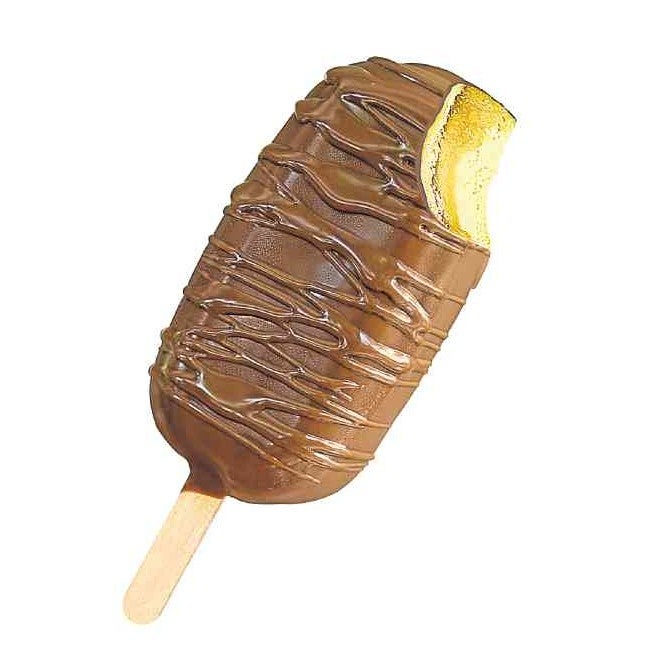 Bananutella Chubby Bar by Sebastian’s. Sebastian’s master sorbetero Ian Carandang launched a line of cookie-dessert sauce-ice cream bars last year. It was such a hit that he’s bringing them back this summer, with new variants.

The new variants include Apple Pie, PB&J, Fudge Brownie and, what’s turning out to be the crowd favorite, Bananutella—made of banana ice cream, banana jam and banana chip shortbread cookie that has been dipped in Nutella for that crisp outer shell. 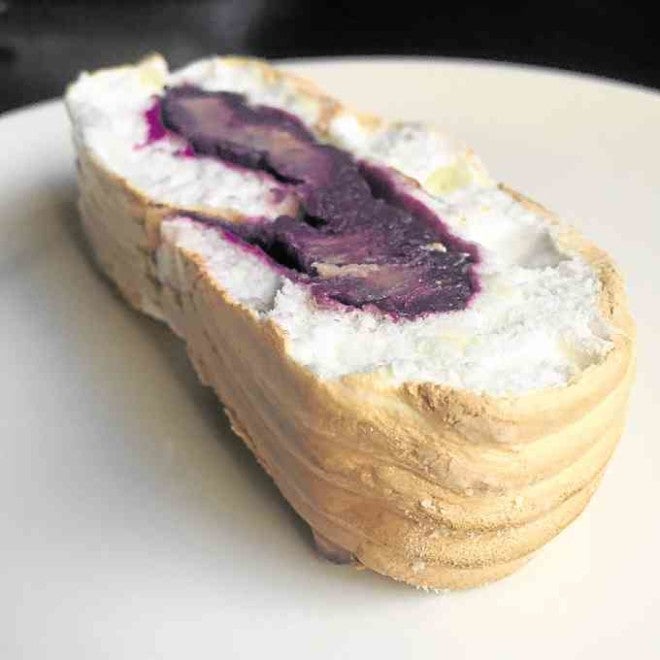 Recently it released the Brazo de Luna, a pillowy meringue roll with salted egg-infused filling. This month, it rides the purple yam trend by offering Brazo de Lila, which is stuffed with two popular Pinoy flavors. “It was supposed to be only ube,” says creator Pixie Rodrigo Sevilla. “But since my daughter Miel loves ube pastillas, I thought of combining both flavors. It worked pretty well.” 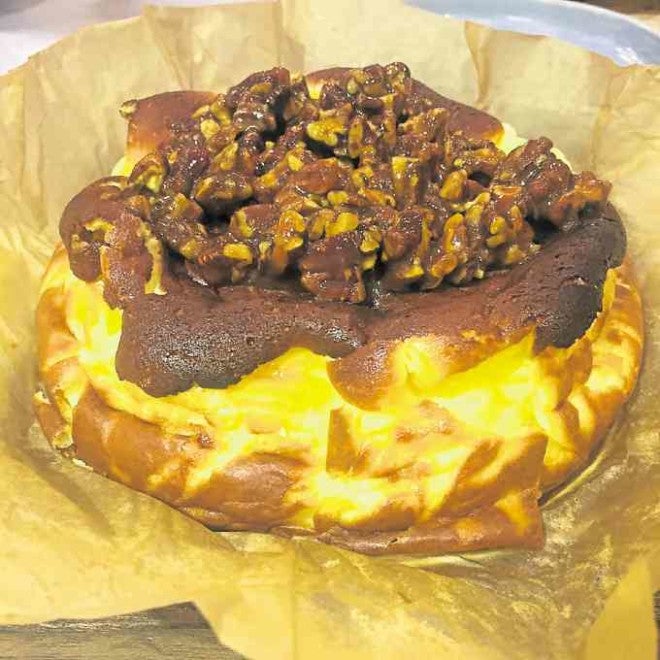 Basque Burnt Cheesecake at Le Petit Souffle. Inspired by a similar cheesecake they had on a trip to San Sebastian, Spain, last year, chefs Miko Aspiras and Kristine Lotilla introduced their own version for The Workshop. They enhanced it by adding dulce de leche and nuts on top.

Unlike many cheesecakes that are rich and dense, this is custardy and has no Graham cracker base. It’s like the yummy filling of an egg tart, which, admittedly, is the best part of that pastry. It’s so good it may very well be the dessert Le Petit Souffle will be known for.