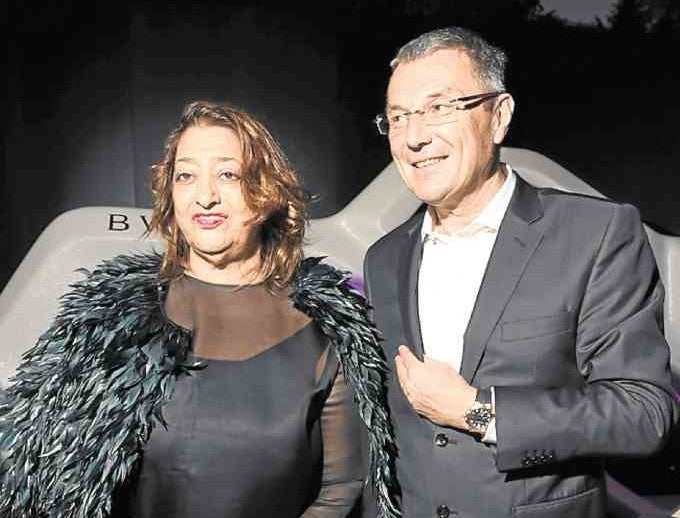 For the first time today in Manila, B.zero1 fans—and there really are—will get to see and own the latest transformation of the jewelry line, as reimagined by the woman referred to by many as “one of the greatest architects of our time.”

The collection, dubbed B.zero1 Design Legend, consists of rings and a pendant that, at first glance, seem quite faithful to the original design from 1999, when Bulgari introduced the line. It has the original flat outer bands stamped with the brand’s logo.

Upon closer look, however, one notes the central looping bands that receive that distinctive Hadid attention.

Like the awe-inspiring landmark structures that have become her legacy, Hadid deconstructed the B.zero1 into graceful, undulating loops—freewheeling, sinuous movements encased in two rigid rings.

Originally inspired by the ancient Roman amphitheater, the Colosseo, B.zero1 Design Legend not only signifies the structural might of Imperial Rome, but is also now symbolic of a design that’s classic, timeless and revolutionary. It marries the bold geometry of Bulgari design and the fluid curves of Hadid’s architecture.

The first B.zero1 from 1999 had a central looping band that referenced the flexible tubular chain of the Tubogas, another Bulgari line, from a late-19th-century design. It was named after the winding tubes of the gas pump. The design had a very industrial look so that its newfound fans dubbed it “the bolt.” The spiral design stood for eternal renewal.

The B.zero1 has undergone several reinterpretations through the years.

On its 10th anniversary, eminent sculptor Anish Kapoor transformed the ring into a contemporary piece of art, with smooth and gleaming liquid mirrored surface, quite unlike the original design.

New materials also have been used to update the look, including ceramic and marble, blended with gold. Some have precious or semiprecious stones.

The B.zero1 Design Legend comes in a four-band pink-gold ring, three-band ring in white and yellow gold, and a pendant in pink gold. (Only the rings are available in the Philippines.)

The B.zero1 Design Legend collection was a design collaboration between the Italian jeweler and the Pritzker laureate for architecture, one of her final projects before she died after a heart attack while being treated of bronchitis in Miami exactly a year ago today, March 31.

Hadid was the first woman to receive the Pritzker Prize for Architecture.

She also had design collaborations involving not just jewelry but also cars, furniture, shoes. She belonged to that rarefied class referred to as starchitects—a portmanteau of star and architect, referring to architects of celebrity status.

Bulgari launched the B.zero1 Design Legend collection at a cocktail party in Manila last night, March 30. The line was launched during the Miami Art and Design Week in December, in conjunction with Madonna’s Raising Malawi charity event.