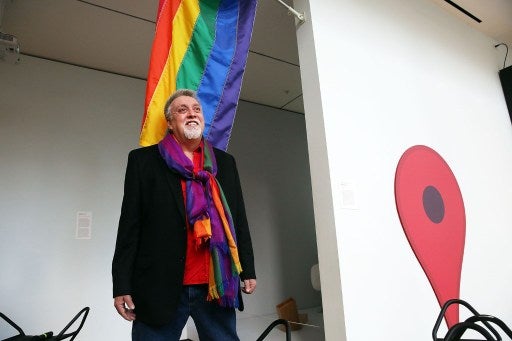 Baker, who was 65, came up with the iconic eight-colored banner for San Francisco’s 1978 gay freedom day, a precursor to the modern pride festival, having taught himself to sew in his 20s.

The former soldier was heavily involved within the San Francisco LGBT rights movement and was a close friend of murdered activist and politician Harvey Milk.

“I am heartbroken. My dearest friend in the world is gone. Gilbert gave the world the Rainbow Flag; he gave me 40 years of love and friendship,” Jones posted on Facebook.

“I can’t stop crying. I love you forever Gilbert Baker.”

He didn’t reveal the cause, but the San Francisco Chronicle said the artist had died in his sleep at his home in New York late Thursday.

Jones urged San Francisco friends to gather for an evening vigil under a rainbow flag in the city’s Castro district.

The news prompted an outpouring of tributes and expressions of grief on social media.

“Rainbows weep. Our world is far less colorful without you, my love,” tweeted filmmaker Dustin Lance Black, who won an Oscar for the screenplay to the 2008 biopic “Milk,” starring Sean Penn as the gay politician.

Baker, born in Kansas in 1951, served for two years in the army, according to his website, and was stationed him in San Francisco just as the gay liberation movement was gathering momentum.

“I just talked to Gilbert last month. He gave us his best and the rainbow flag will be an even more treasured keepsake of our history,” posted Robert York, a senior director at healthcare lobby group the National Quality Forum.