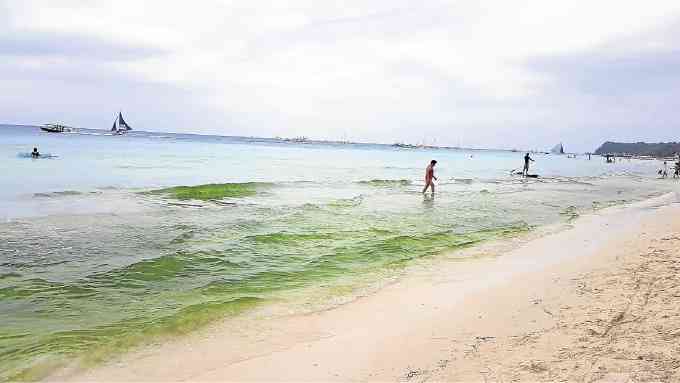 Boracay’s green algae growth: What exactly is it?

Boracay is as close to the tropical ideal you’ll find in the Philippines, especially the island’s gentle coastlines and transporting sunsets. Add in a thriving nightlife scene and you have one of the top tourist spots in the region, according to Condé Nast Traveler.

Today, however, that “tropical ideal” is besieged by green algae growth—a cause for concern on the shore of Boracay’s central tourist hotspot.

The algae, which can be seen in Stations 1, 2 and 3 of White Beach, is most visible in Station 2, where most of the commercial establishments are located.

It’s easy to blame it on Boracay’s rapid development which affects sanitation and environment controls.

But, is the algae growth a sign of worsening pollution?

According to its findings, the Japan International Cooperation Agency (Jica) said the island’s sewage system can no longer accommodate the burgeoning population.

While Jica agrees that tourism helps the Philippine economy, the agency likewise implores Boracay stakeholders to be more keen in protecting the island resort’s marine resources.

Dr. Miguel Fortes, University of the Philippines scientist and member of the Coastal Ecosystem Conservation Management (Cecam) project, noted that untreated sewage on the eastern side of Boracay has reached alarming levels.

And while the Environment Management Bureau says the water condition in Stations 1, 2, and 3 at White Beach on the west side is still OK, longtime residents of the municipality of Malay, Aklan, where Boracay is situated, claim that the algae are harmful.
Folk belief

But Mario Saguiente, an Aklanon who has worked in Boracay since the early ’90s, says that the algae growth has always been there even before the influx of tourists.

“The green algae always come during the hot, summer season,” he points out. “When the algae arrive, it means that summer is coming. It’s been coming and going since we were young.”

The Aklanon and Boracay’s tribal group, the Ati, who were interviewed regarding this issue, mention a folk belief that the algae growth is a harbinger of summer.

Algae multiply rapidly because it thrives in sunlight.

Discovery Shores Boracay senior operations manager Julius Alegre supports the locals’ belief. “The algae along White Beach simply indicates that summer is coming, he says. But it now comes as early as January and February, when before it came during March and April. I think it’s the shifting of the climate that made the algae growth come early this year, what we call climate change.”

Alegre has been working and living in Boracay for the past 10 years. “If the algae growth stems from pollution,” he asserts, “why are there no growths during the rainy season, or in the cold months of October to December? It should be yearlong occurrence, right?”

Boracay is the country’s pride, consistently topping the the list of summer travel destinations for local and foreign tourists.

In 2008, the Department of Tourism (DOT) named Boracay as the “Number One Beach” in the Philippines, after it generated P11.6 billion in revenues that year, according to the DOT-commissioned Boracay Island Comprehensive Land Use Planning: Vol 1.

It was the top pick of Condé Nast Traveler’s Readers’ Choice Awards in 2016.

Included in the same edition are two more Philippine destinations on Condé Nast’s Top 20 Best Islands in The World list: Palawan, No. 2, and Cebu, No. 5.

What can people do to save Boracay?

For starters, and as a form of activism, tourists should ask Boracay business establishments and government officials what they are doing for the island. People should ask hotels and restaurants if they have programs to help in the sustainability of Boracay’s environmental condition.

It would also be beneficial if Filipinos could pressure lawmakers and the local government of Boracay to enact stricter policies to protect the island and to better regulate the opening of businesses.

Everyone who has ever been there can contribute in ways big or small, so that Boracay does not end up as paradise lost. —CONTRIBUTED