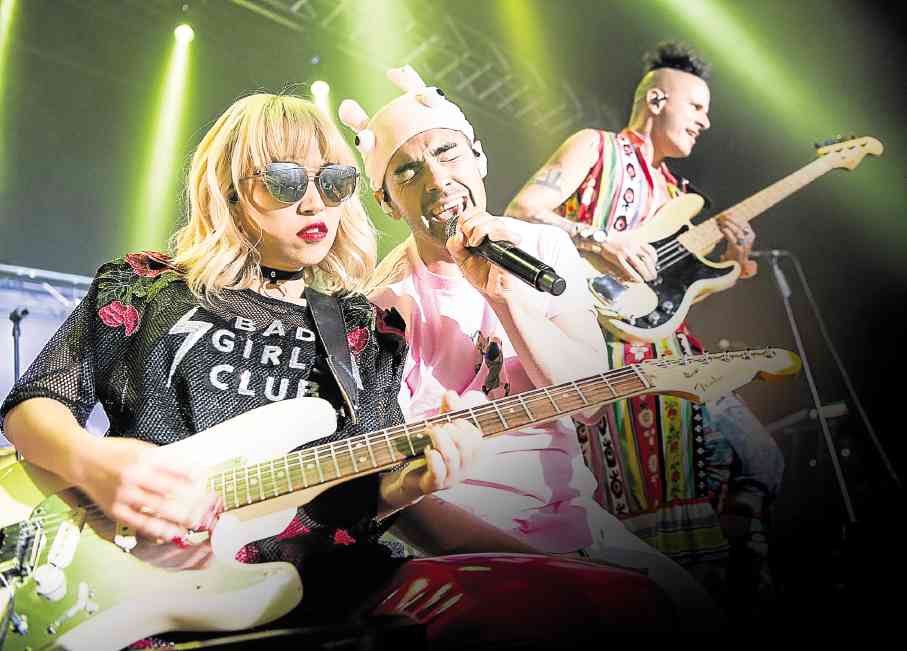 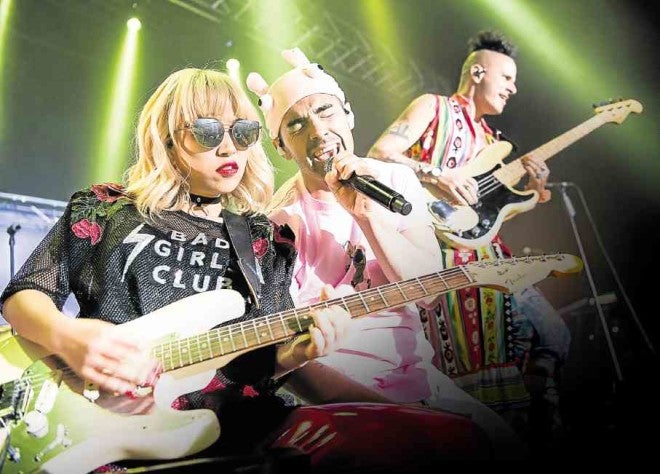 If you thought DNCE’s music was the epitome of fun, wait till you see the band perform live.

Fans from Korea (and beyond) braved the post-winter chill to catch the American quartet’s first concert in the country at the Yes24 Live Hall in Seoul’s Gwangjin district. MCA Music flew in Super for the show.

With its pop punk-meets-disco funk repertoire, DNCE seemed dead set on getting people out of that humpday slump, and that they did. And how.

The band clearly lived up to its name. With hardly a pause in between songs, DNCE gave a slick, seamless performance of all tracks off its eponymous album, plus mashups and amped-up covers of pop classics from the last three decades.

After a “Star Wars”-themed intro, frontman Joe Jonas popped out from underneath a Darth Vader helmet and joined his bandmates—guitarist JinJoo Lee, bassist Cole Whittle and drummer Jack Lawless—in kicking off the main set with the cheeky disco ditty “Naked,” followed by the title track.

The band’s boundless energy was fueled even more by the fans’ enthusiasm as the latter chanted and sang along to all the songs, light sticks bobbing rhythmically like neon mini-light sabers across the concert hall.
There’s definitely no shortage of onstage antics with this band; between songs, the members would periodically throw random collectibles— including women’s underwear —to the eager crowd.

Not only do they sound as good live (if not better), they also look good while they’re at it. While bearded, blue-eyed Jack serenely doled out beat after infectious beat from his pedestal, JinJoo and Cole made for a formidable and utterly charismatic pair as they bounced searing riffs off of each other—and, occasionally, while lying flat on their backs in the middle of the stage.

On the other hand, fans would squeal every time Joe slung an arm around the blond guitarist’s shoulders, which led us to believe that they’re secretly shipping the two in real life. (We smell a “JinJoe” fanfic pairing in the works.)

For his part, Joe seemed perfectly contented with sharing the spotlight with his bandmates, which takes some pressure off him as the group’s most prominent member.

As DNCE’s lead vocalist, the former JoBro and Disney heartthrob gets to channel his inner goofball and have fun with his musician buds while steadily building a more mature kind of mainstream appeal. How is this possible? Just ask the squealing fans who still swooned over Joe even as he strutted across the stage with fluffy pink bunny ears on his head.

With his quirky outfits and easygoing personality, Cole is pretty hard to ignore even while not performing. But onstage, the mohawked, tattooed bassist was a total livewire, owning the stage and ripping through his instrument with enough flair to make the Red Hot Chili Peppers’ Flea proud.

Aside from handling bass guitar, Cole also mans the keyboards, plays the kazoo for “Jinx,” and does the rap solo for the trippy Smash Mouth-sounding track “Blown.” Is there anything this guy can’t do?

Next, the band busted out a tribute medley of David Bowie’s “Let’s Dance” and George Michael’s “Freedom! ’90,” which melted into the lazy opening chords of the hangover anthem “Good Day.”

The foursome sat down for an intimate, stripped-down mini-set, starting with the bittersweet breakup track “Truthfully,” which appears to be quite the fan favorite. The senti spell was momentarily broken when the audience couldn’t help giggling at Cole blowing on a kazoo for the “Jinx” intro, but eventually resumed as people got caught up in the song’s moony optimism. The mini-set closed with the wistful power ballad “Almost,” which saw the foursome returning to full band mode.

This Korea show was extra special, as it also doubled as an emotional homecoming of sorts for the band’s resident “Guitar Girl.” Addressing the crowd in Korean, JinJoo recounted how, without speaking a word of English, she had moved to the United States 10 years ago to pursue a music career; lonely and frustrated, she had wanted to go back to Korea countless times, but the thought of being able to perform onstage for the people back home kept her going.

“Whenever I felt lonely and times were tough, I imagined a moment. And this is the moment,” a teary-eyed JinJoo said amid wild cheers of encouragement, and yelled a heartfelt “I love you” to the crowd before the band launched into the sweetly seductive track “Toothbrush.”

Not to be outdone, Cole added his own shout-out: “I don’t know how to say this in Korean, but I f*cking love you,” he yelled, then treated the laughing crowd to a throwback sample of Ghost Town DJ’s one-hit hip-hop wonder “My Boo.”

The band capped off the 80-minute romp with a rock medley of the Spice Girls’ “Wannabe,” Britney Spears’ “Oops!… I Did It Again” and Kanye West’s “Fade,” which segued into the euphoric summer smash hit “Cake by the Ocean”—a fitting finale to a sexy, silly, fun-filled night.

If there’s a DNCE gig near you, do yourselves a favor and catch it. Fan or not, you’d be hard-pressed not to enjoy yourself immensely, whether it’s dancing to the grooves of “Body Moves” or shouting “Ah-ya-ya-ya-ya-I” along with other fans to that impossibly catchy “Cake” chorus.

Grab a copy of DNCE’s self-titled debut album at your local Astroplus and Astrovision stores. You can also download and stream the album on Spinnr.ph, iTunes, Apple Music and Spotify, or buy it via this link: http://link.to/DNCEPDI