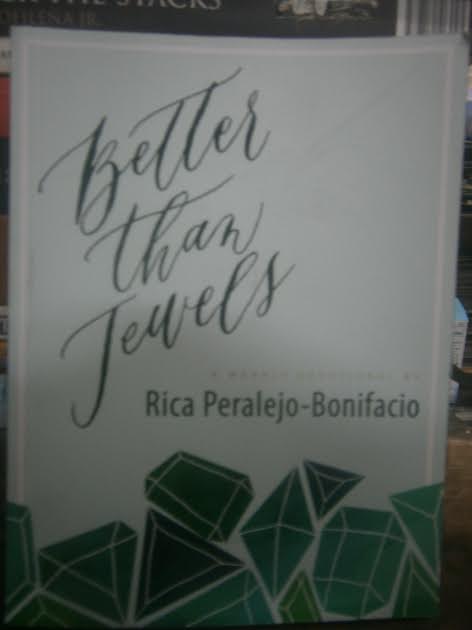 When she was very young, Rica Peralejo-Bonifacio decided to “invest” in a piece of jewelry. “Eventually,” she recalled, “my mother taught me the value of investing. It became for her something of value. But soon the ‘love and wisdom’ of God became something of more value than jewels.”

Bonifacio, a onetime actress, and TV host, is the founder of the Olivia Women Movement, a collective.

She spoke at the launching of her book, “Better than Jewels,” at Toby’s Estate restaurant in Greenhils, San Juan City.

Co-host was Donita Rose, her friend and colleague in the entertainment industry.

She married, begot a child and lost the second one.

“Nothing   has helped me more than the love of God,” said Bonifacio. “This is what I want to share.”

“Better than Jewels” (OMF Literature, 2017) is a weekly devotional with a different theme each month, as in “New Things,” “How to Love,” “Jesus and . . .” “Developed,” “Wind Beneath Mom’s Wings” and “Know the Father.” Each entry comes with a page for the reader’s response.

The book is aimed at Christians, women, small group leaders and general readers.

The author shares her reflections on the joys and trials of motherhood, generosity and gratitude, love and sacrifice, and hard lessons from her past.

“There was turmoil in my life,” Bonifacio revealed. “Eight years of my life went to a walang kuwentang (worthless) relationship. But the things I regret the most were the things that made me turn to God.” —CONTRIBUTED