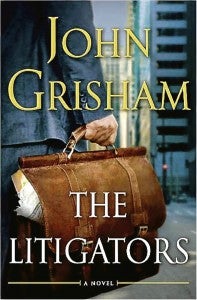 At the turn of the millennium and at the height of his commercial success, John Grisham did something strange. The best-selling author best known for courtroom thrillers—some of which had been adapted into motion pictures—decided he wanted to write something aside from legal thrillers. Thus he tried his hand at other genres, some of them successful and others not.

But a few years ago, Grisham returned to the courtroom drama full-time and seemed to be paying better attention. His new work was more polished and more poised, even as he took out some asked-and-answered plot points and gave them an overhaul, as well as a new paint job. Grisham’s 25th book, “The Litigators” (Doubleday, New York, 2011, 385 pages), is a perfect example of what Grisham’s been busy with these days.

Thirtysomething bond lawyer David Zinc has a high-paying but soul-killing job at a powerful Chicago law firm, but when Zinc finally snaps, he gets drunk and finds him stumbling into the offices of a most unusual law firm called Finley & Figg. The senior partner, Oscar Finley, is an eccentric dandy while the junior partner, Wally Figg, is a big, brash ambulance chaser; the two can barely stand each other and so Finley & Figg just barely gets by. But Zinc feels this is the best thing for him and basically badgers them into taking him on as an associate.

This happens just in time for Finley & Figg to get involved in a massive class-action suit against a big pharmaceutical company called Varrick Laboratories because of a heart drug. Despite having no litigation experience whatsoever, Finley & Figg files suit and prepares for trial but hope for a big settlement. This being a John Grisham book, things don’t quite work out as they planned, which is good thing for the readers.

While the looming high stakes court case against the drug company seems to be at the heart of “The Litigators,” the book is actually more about the three lawyers from Finley & Figg and how they respond to the radical changes triggered by Zinc’s arrival, as well as the Varrick Labs lawsuits. The legal tactics remain hard-boiled and sneaky as lawyers face off and try to outsmart each other. The result is a portrait of lawyers trying to do good, lawyers trying to do bad stuff and lawyers just running out of control.

What you get is a mix of something old and something new. Grisham’s recent books feel like new versions of his earlier books but better written. That is by 2009’s “The Confession” echoes 1994’s “The Chamber” and 2010’s “The Associate” reminds us of 1991’s “The Firm.” In this case, “The Litigators” is reminiscent of 2003’s “The King of Torts,” but with much better characters.

While Zinc himself is for the most part a typical Grisham protagonist (Harvard graduate with heart of gold and way in over his head), but his two colleagues are not. The often hilarious and sometimes downright outlandish happenings at Finley & Figg are surprising and engaging, making for the fact that “The Litigators” itself is a bit predictable and bit condensed, especially to those who have read most of Grisham’s bibliography. Even the antagonists seem more fleshed out. John Grisham is back doing what he does best and the results easily overrule any earlier motions denied as “The Litigators” proves that what happens away from the courtroom can be as interesting as what happens in them.