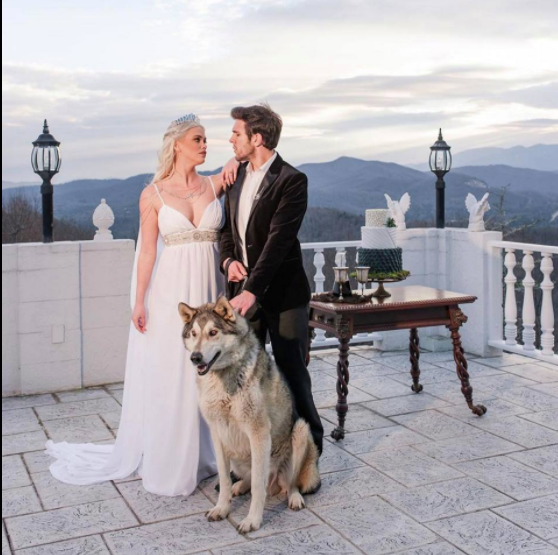 HBO’s critically acclaimed series “Game of Thrones” has certainly taught its fans to be wary of weddings. However, one photography studio didn’t seem to get the memo.

As themed weddings are getting more and more popular these days, Katie Lee of Katherine Elena Photography has designed a Game of Thrones-inspired wedding shoot.

The stunning photos, which has since gone viral, capture the show’s most endearing features, such as strong women characters and extravagant wardrobes.

According to Mashable, the shoot was fittingly taken inside a real castle in Spruce Pines, North Carolina, USA.

The bride mimicked one of the show’s female leads, Daenerys Targaryen, as she wore a dashing white gown paired with a shiny tiara.

One of the bridesmaids appeared to dress like Sophie Turner’s character Sansa Stark, and even posted a photo along with a dire wolf.

“The gowns had a lot to do with finding a happy medium between fantasy and wedding as well,” Lee described the shoot to the news outlet.

“We knew that we wanted some sort of cape for Austen (who was playing Daenerys) with a very ethereal dress. For Courtney (playing Sansa), we wanted something regal and girly, but very strong. The velvet was the perfect fabric for that and the fur cuffs and stole along with the long train were perfect for her,” she added.

Aside from embodying the series’ most beloved characters, the shoot also displayed other GoT mementos, including Westerosian-themed coins and jewelry, as well as a cake with “dragon scale” icing.  Khristian Ibarrola /ra

‘Game of Thrones’ announces winter is coming – in summer