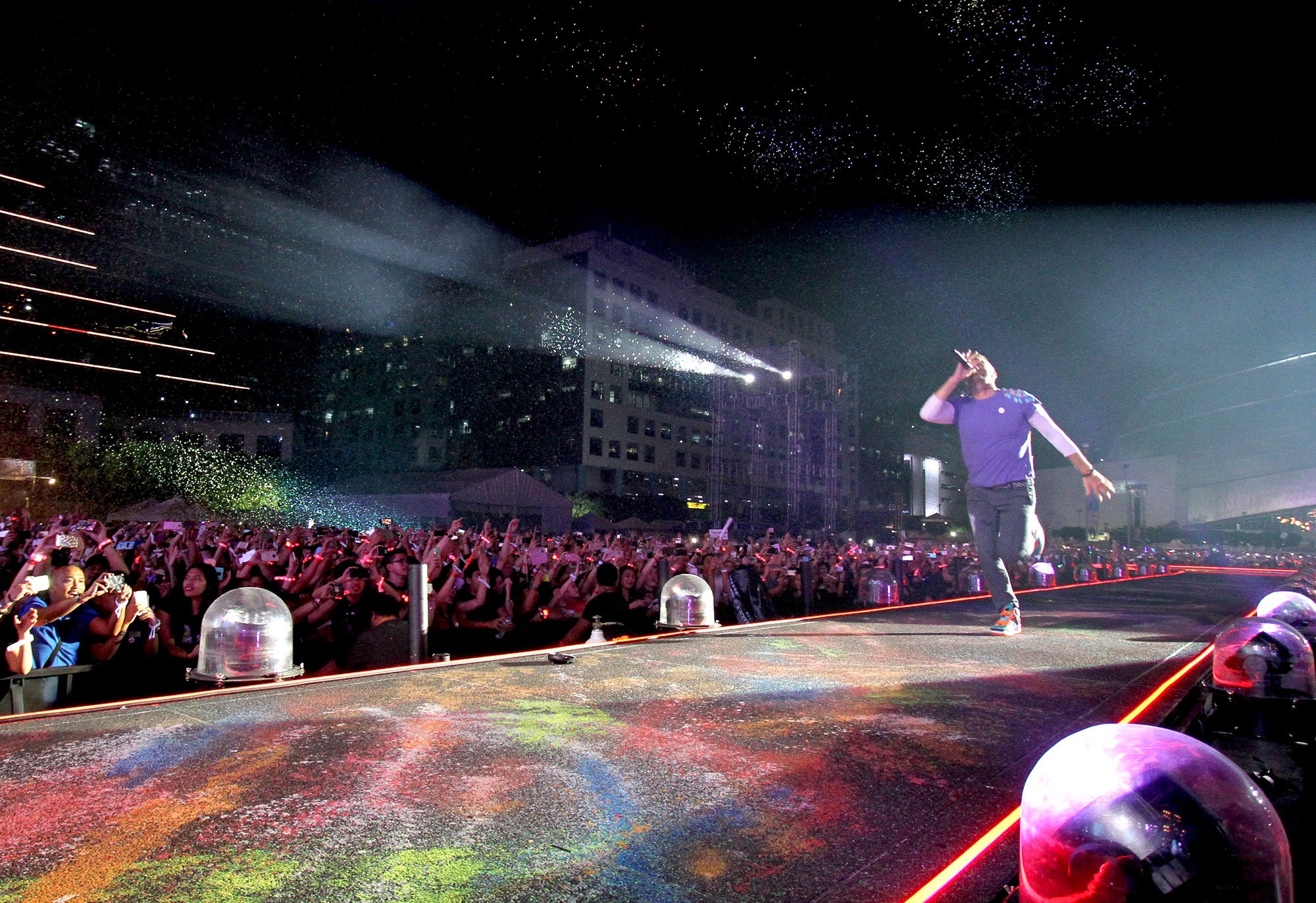 Music is the drug

Though the 100,000-strong crowd at the Coldplay concert on Aug. 20, 2016, in Rose Bowl, Pasadena, which Lifestyle covered, was about three times the size of the 45,000 fans who turned up at the British band’s Manila date last April 4 at the Mall of Asia (MOA) open grounds, the vibe was understandably more exciting and warm here.

For one, it was the first time that Filipinos saw Coldplay perform live. They paid princely sums to see a superstar act, whose current tour packed all the elements of a visual spectacle to enhance its already dense, varied, but still melodic music.

The audience—composed of a mixed demographic of upper and middle class sosyal, the hip, the celebs and the plain cool types in their 20s, 30s, 40s, and a sprinkling of 50-somethings—apparently knew the lyrics in almost every track in the band’s 24-song setlist. So, when Coldplay frontman Chris Martin sang, “You’re a sky full of stars,” everyone felt it was about them and their loves, and that music made life ethereal.

The following night, a slightly different set of concertgoers—more bagets, many accompanied by their parents and elder siblings—showed up at the MOA Arena to catch the concert of American vocal group Fifth Harmony, with Filipino-American a cappella group The Filharmonic as support act.

The screams were more piercing, owing to the high-pitched voices of the predominantly female adolescent and teenaged audience. And the vibe was electric, with more anxiety and restlessness as the girls stood from their seats, craning their necks for a better view of Fifth Harmony’s Ally Brooke, Normani Kordei, Dinah Jane and Lauren Jauregui (original member Camila Cabello quit last year) all wearing “Pilipinas” tees.

What made the show fun was the lively interaction between the performers and the audience—every bump, grind and soaring vocals eliciting shriek after ecstatic shriek.

In the end, everybody was singing, “Baby, I’m worth it!”

Not to be outdone, backtrack a few nights, on April Fool’s Day, a horde of punks dressed in their “battle-gear” best descended on B-Side in Makati to revel in “Urban Bandits: Independence Deja Vu!”—a gig that celebrated the Bandits’ milestone album, “Independence Day,” released 30 years ago.

DJ Par Sallan played classic rock and punk in between sets of a lineup that included the Wuds, G.I. + The Idiots, Goo and Pinkcow, with Erwin Romulo and Jun Sabayton as MCs, and co-organizers Lourd de Veyra and Bert Sulat Jr. in the sidelines.

More than mere nostalgia, the event brought back to life the sense of danger and rebellion that gave birth to punk rock—the antithesis of what was safe and boring in music, in a setting that simmered from the sweatshop atmosphere, the alcohol-fueled audience very much a part of the action, in fact the center of attraction, as they slammed into each other in a tribal dance that expressed the anger, frustration and confusion in such incendiary Bandits originals as “News of the World,” “Battle of Mendiola,” “Breaking the Wall” and “No Future sa Pader.”

It was doubly significant that the gig would be held at a distressing time in Philippine history, almost eerily similar 30 years back.