Is the Taal Basilica on the verge of collapse? | Inquirer Lifestyle ❮ ❯ 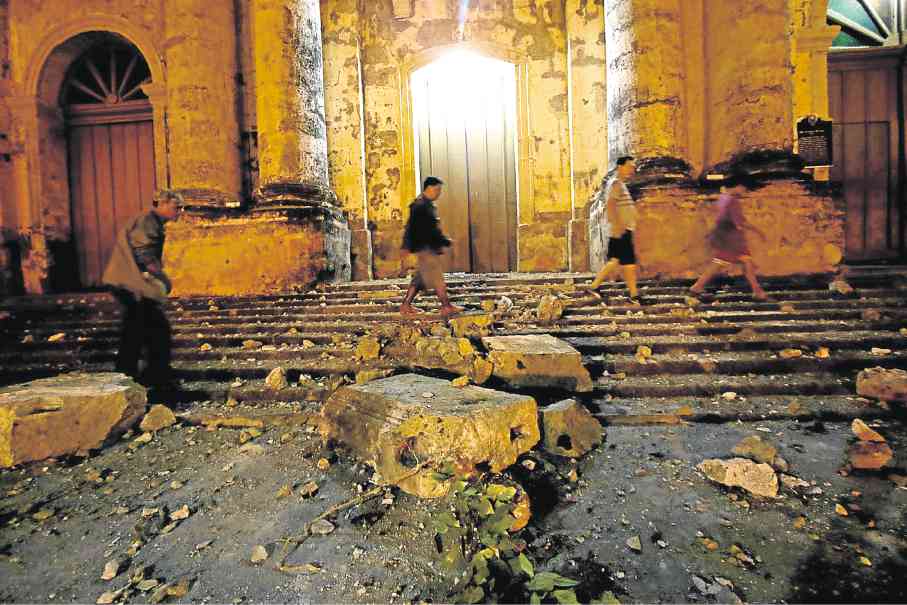 Residents of Taal were still thankful that the earthquake occurred at night when there were no visitors at the church site. —RICHARD A. REYES

Is the Taal Basilica on the verge of collapse?

Ramon Orlina, noted sculptor and native son of Batangas, has warned of further damage to the centuries-old Taal Basilica, possibly the collapse of its ancient walls and bell tower, following the 5.5-magnitude earthquake that rocked southern Luzon on April 4.

The culprit could be an aftershock, another earthquake in the future, or just the sheer weight of the church’s own materials bearing down on already cracked walls and surfaces.

In an interview with Lifestyle, Orlina blamed his scenario on the unauthorized makeover of the 262-year-old church, an initiative of parish priest Msgr. Alfredo Madlangbayan. The sculptor alleged that the priest went ahead with his overhaul instead of retrofitting the church to allow it to cope better with seismic movement.

The Taal Basilica, formally known as the Basilica San Martin de Tours, was declared a national heritage site under Ferdinand Marcos’ Presidential Decree No. 375. This made the church a protected monument that cannot be renovated without the consent of the National Historical Commission of the Philippines (NHCP).

Orlina and Madlangbayan had been at loggerheads since 2012, due to the priest’s controversial renovations that the sculptor said were not consistent with the basilica’s Augustinian architecture.

While Orlina said the huge slabs of adobe that fell off the walls support his theory, he remains thankful that the earthquake occurred at night, when there were no church-goers or tourists.

“Imagine if there were pedestrians at nagkaganun. What we should watch out for are the aftershocks. Delikado pa,” he added.

Interviewed by Inquirer’s Southern Luzon bureau, Madlangbayan downplayed Orlina’s warning of a collapse, calling it “farfetched,” but acknowledged that “it is better if we do something now.”

The priest noted that the church’s façade suffered “considerable” damage, counting four “blocks” that fell on the night of April 4.

Madlangbayan downplayed the damage, saying only the façade was affected, not the church structure itself.

Orlina said he told Madlangbayan to focus first on retrofitting the ancient structure.

Orlina, a licensed architect, said many old churches in Metro Manila had already undergone retrofitting, which is when an existing structure is improved or modified to protect it from seismic movements.

The sculptor said retrofitting in the case of Taal Basilica had already become a must, given that the adobe stones used in the construction had already undergone so much weathering over the years.

Orlina pointed out that the country’s ancient churches were designed by foreign architects, who were used to materials available in Spain.

“The reason old churches collapsed during the Bohol earthquake in October 2013 is because of all that rain that the materials were exposed to. The water creates small gaps between the stones. So, when the earthquake struck, may galawan sa walls, halos lahat ng simbahan sabay-sabay nagbagsakan,” the sculptor explained.

Orlina complained that instead of heeding his suggestion, Madlangbayan prioritized instead the construction of the Jubilee Hall, a multipurpose events place, adjacent to the church, meant to host wedding receptions, baptisms and other social events.

Asked on the phone whether or not he supported retrofitting, Madlangbayan replied, “Natural (Naturally).”

Madlangbayan assured worried residents the church would be able to shoulder repairs needed after the quake. This, following reports that Batangas Gov. Hermilando Mandanas plans to donate P1 million for the basilica’s repair.

The priest welcomed the news, adding that the NHCP also suggested that the entire church undergo digital scanning “like an X-ray done on people to check and then do an analysis or assessment by a structural engineer.”

Madlangbayan said NHCP representatives already inspected the area the day after the earthquake (“I’m so touched by their concern”) while the Philippine Institute of Volcanology and Seismology (Phivolcs) advised church authorities to cordon off the site, particularly the area the blocks fell from, as a safety precaution.

The priest announced that a committee that would “oversee future actions” on the church will be set up after the Easter celebrations later this month.
In several e-mails, Orlina enumerated the visible features of Taal Basilica that could spell danger, should a strong aftershock or another earthquake occur.

He said the cement finish in some parts of the façade are “not aligned,” indicating these were just plastered cement that was applied to create an appearance of a smoother surface

Orlina also scored Madlangbayan’s move to add arches to the windows. “The arches were not there before and do not match the façade of the basilica’s architecture.”

Also, there are already visible gaps between the original bricks on at least one side wall of the church. Orlina said another “push-and-pull” motion of another earthquake could make the wall collapse.

He noted that the ancient walls are made of load-bearing adobe stones. The “very heavy” bell tower on top has been strengthened with reinforced concrete. Orlina said old adobe and new concrete “are not compatible with each other.”

Orlina explained the bell tower has already been “twice covered with reinforced concrete” to complement the Jubilee Hall.

As it is, the bell tower’s heavy weight includes that of the church’s musical bells. This entire portion is supported by huge but centuries-old beams and structural beams. Orlina said it is possible that the load-bearing adobe stones below the bell tower are already weakening.”
The sculptor worries that because of all these alterations, the Taal Basilica could also “lose its chance to be declared a Unesco World Heritage Site.” He then pointed to the Sta. Maria Church in Ilocos Sur that already earned that distinction.

Told about the adverse feedback on his project, Madlangbayan initially refused to react.

“I don’t listen to them,” he said. “That will make things worse. I am doing my things quietly. They are UFO—unidentified flying objects. I do not pay them attention; they are falling into disgrace.”