Where to get your ‘Walking Dead’ fix in Atlanta, for starters | Inquirer Lifestyle 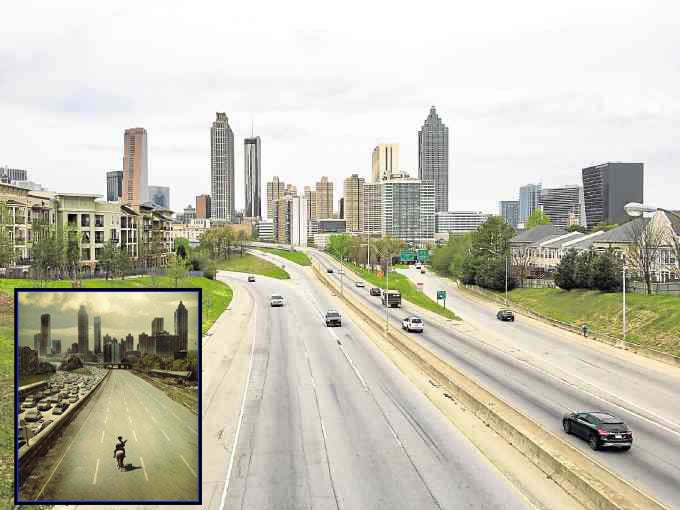 Where to get your ‘Walking Dead’ fix in Atlanta, for starters

ATLANTA—There are three global brands this city, the capital of the state of Georgia, is known for: Coca-Cola, CNN and Delta Air Lines, whose headquarters are all here.

But, if you ask TV geeks, there’s also the cult, post-apocalyptic zombie drama “The Walking Dead” (TWD), the smash-hit first season of which was set and shot here entirely.

When I realized I had a full day free after the inaugural of the Delta “747 Experience” here, I started searching for flights to Savannah, Georgia’s oldest city farther south of here, and the setting of John Berendt’s 1994 New York Times best-selling novel, “Midnight in the Garden of Good and Evil,” which was adapted onscreen, directed by Clint Eastwood and starred Kevin Spacey.

I was so captivated by that book and its wild, outré characters, and so charmed by the quirkiness of the city it described, that I swore, one day, if I ever found myself in the Deep South, I’d visit Savannah.

Searches, however, turned up too costly return tickets for a day trip ($800+), and the only other option was to leave a day early and spend the night—in a city famous for haunted places. And ghost tours.

That’s how the walkers won. (Walkers, by the way, is TWD-speak for zombies, if you have to ask.)

Atlanta Movie Tours runs three “Big Zombie Tours,” the third one spawned just recently by the success of the first two, which are both rated five stars on TripAdvisor.

Tour 1, which I took, covers Season 1 of TWD, a three-hour drive-through around downtown and its outskirts, and stops at key filming locations, including the hospital where Rick Grimes wakes up from his coma; Terminus; and the goat farm where the Vatos group that took Glenn Rhee hostage camped in Episode 4 (and incidentally also the setting for “The Hunger Games: Catching Fire’s” District 12).

At the lookout point on Jackson Street Bridge overlooking Interstate 85 and Atlanta’s skyline, the backdrop of the TWD poster with Rick on a horse, our tour group of seven—two couples, a mom and her teen daughter, and I—got to take selfies, and the cheesy but obligatory group zombie shot.

Our guide was a wiry, bespectacled guy with a mop of curly hair named Patrick Williams, who has played a zombie and Terminus resident on the show. If you take the tours between May and November, TWD’s filming season, you might actually see some exciting things happening in the sets, he said.

Having worked as an extra in several films, including the comedy flicks “The Internship” and “Anchorman 2,” both filmed here, Patrick shared insider scoops and anecdotes not just on TWD but also of other films made here.

He said Steven Yeun and Michael Cudlitz (who play Glenn and Abraham on TWD) were paid to still show up on the sets even after their characters were killed, just to throw off fans. He also talked about “zombie school” (where they watch George Romero films), and how there’s a pool of extras often called back to play walkers; why most walkers wear long sleeves and cardigans (less skin to cover with makeup) or sport long hair (sometimes to cover elastics of standard Halloween zombie masks, for walkers who won’t be filmed close-up).

But I won’t spoil all the fun here and spill everything. You’ll have to take the tour.

You see, owing to a 2008 law granting tax breaks on film productions, Georgia is a popular filming location, with many blockbuster movies and TV shows shot here, like “The Hunger Games: Catching Fire,” “Stranger Things,” “Selma,” “The Blind Side.”

That means, if you’re lucky, you might run into some random filming on a visit.

The offices of Atlanta Movie Tours, in Castleberry Hill downtown, is just a few meters from the lot where key TWD scenes were shot, including the rooftop where they handcuffed Merle. (The guide shows clips from the show on the tour bus to jog your memory.)

It’s also on the same street where “Driving Miss Daisy” was shot, as well as scenes for “Vampire Diaries.” Next door was the setting for the weed brownie shop in Melissa McCarthy’s “The Boss.”

Big Zombie Tours 2 and 3 are outside of town, in Senoia, less than an hour’s drive from here, and cover Seasons 2-6 (Woodbury, Kingdom, Alexandria, Herschel’s farm, the prison). Sadly I didn’t have time to do them back-to-back. I guess that’s one other reason to return (the other, still, being Savannah).

Of course, there are plenty of souvenirs from the gift shop, for yourself and your zombie geek friends back home, like full-size and mini Lucilles; standees and posters of Michonne, Negan, Daryl, Rick; the usual mugs, magnets and tees. But no, there were no katanas or crossbows.

Other must-visits in Atlanta:

World of Coca-Cola. This fun, family-friendly museum houses the “secret” recipe of the world’s most famous beverage, and thousands of Coke artifacts. You get handed a free bottle (actually, a can shaped like the sexy Coke bottle) of an ice-cold Coke of your choice—regular, Diet, Zero—at the start of the tour, and round up the sugar rush with free tastes of over a hundred popular beverages from all over the world, before shopping for souvenirs.

CNN Tour. CNN Center, the news cable company’s world headquarters, holds 50-minute tours on how a live broadcast is made, and takes you around actual studio sets and the heart of the newsroom. (No photos are allowed during the tour.) Keep your ears peeled at the end of the tour: There’s a clip with Anderson Cooper giving a shout-out to Filipinos while covering Supertyphoon “Yolanda.”

Georgia Aquarium. North America’s largest aquarium houses thousands of aquatic animals. One of the highlights is the Ocean Voyager exhibit, which includes four whale sharks (butanding). This exhibit alone is about the size of a football field.

The Georgia Aquarium, CNN Center and World of Coca-Cola are all in the vicinity of the Centennial Olympic Park, a public park built for the 1996 Summer Olympics.

If you’re looking for something more low-key and local, check out Ponce City Market, an industrial-looking structure reused into a casual food hall. It houses eateries of some James Beard Award-winning chefs.